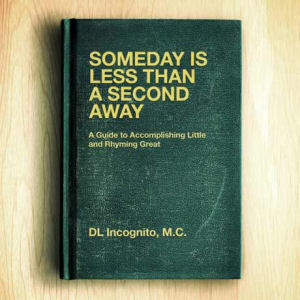 DL Incognito :: Someday Is Less Than a Second Away

Two things come to mind immediately when I think of Ottawa – my DL Incognito. For me he’s the frozen North’s vocal equivalent of Big L (rest in peace), and arguably approaches (or perhaps exceeds) Lamont’s lyrical abilities – although he is more of a storyteller and less of a punchline snapper. Still if you’re a fan of both rappers, it’s hard to deny there’s an eerie similarity to the two, separated only by a slight Canadian accent to one and a somewhat more prominent New York one to the other.

The short distance between L and DL, or between New York and the Canadian border, is not the short distance Incognito refers to as “Less Than a Second Away.” Incognito may have a name that implies he’d rather be unknown or unseen, but there’s not much that he hides in his lyrics. His raps tend to be personal and at times probably painful for him to write, such as his frank admission that he and brother Nick lost their mom to cancer. For someone who wears his heart on his sleeve, you would WANT “Someday” to be “Less Than a Second Away.” But what’s coming someday? A better tomorrow, a brighter future, less painful and less recent memories of the past, the figurative and literal emotional distance to move forward, more success and recognition around the corner. “Mysterious Ways” featuring Geneva is not +officially+ the title track of DL’s new album, but she croons it like it is while DL’s raps address all of the above themes and then some:

“Things often happen in mysterious ways
Why the 20’s wanted black three Jays
And I paid cause back in the days when I wanted them thangs
Couldn’t pay, so I’d say to myself ‘One day
is not too far away’ even then couldn’t wait
Grew up a little faster than my mommy woulda liked – ay!
Good riddance, cause the rhythm was my safe place
With destiny I got a blind date anyway
Someday’s less than a second away
So when I came in the game I would strain to obtain
the respect that I gained, I deserved it
Feel the pain of the tracks that I murdered, then nurtured
Took courage to continue after everything that hurt us
I told my brother that we never did deserve this
But everything that happens, it got a purpose
Hopefully that mean it surface soon
As I write this song, I still got no clue”

DL is just as capable of being egotistical as the next man though, as he argues for being the pound for pound best in hip-hop on “Simple Math” with the phrase “skills unsurpassed/by any other rapper in or out my weight class.” He’s got his head screwed on straight though in “Here I Am” when he says “Just being me and nothing else/not easy to do when everything is on itself.” Some of DL’s songs are pretty short by radio or retail standards – “The Chase” for example only clocks in at 2:24 – but everything that needs to be said is fit into that time as DL washes away his pain with shots of Crown Royal and then pursues a fly female at the bar. When he really wants to get his swag on though, the funky 70’s sound of “Admiration” and his rap bars set standards: “You aim for the stars but I reach much higher/talent’s out of this world, they must admire.”WORD.

DL is good enough at handling his B.I. that he doesn’t need much in the way of guest artists or producers, but he does let a few friends get in the mix. Adam Bomb is on the aforementiond “Simple Math,” D-Sisive wanders in from URBNET Land to join “Days Gone” and Caliph can be heard on the Pete Rock-esque horns of “Grey Hairs.” “No Rings” might be his most definitive track though – he seems to simultaneously acknowledge that he’s not received the trophies and accolades he deserves yet declares himself in “a league of my own” where he doesn’t need those World Series rings to prove his worth. Well I’m not in the position to hand out one (they’re worth more than I make in a year) but were it in my power to, DL Incognito would already have been recognized. He’s one of the dopest emcees in Canada, on par with fellow guest star D-Sisive, and it’s a shame he’s not better known. Perhaps he should consider a name change to DL Most Visible.

DL Incognito :: Someday Is Less Than a Second Away
8Overall Score
Music8
Lyrics8