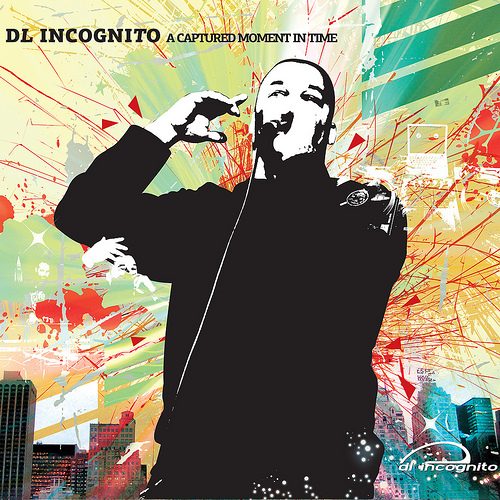 Ottawa’s own DL Incognito has made a career out of consistently producing solid albums with little flare or filler. While his rhyme schemes are never going to earn him any Hip Hop Quotables, they are also never in danger of falling into hip hop clichÃ© mode, and, when combined with the fresh beats he always manages to bring out, they are more than adequate to carry the day.

On his fourth album, DL continues his move away from the battle-oriented styles of “A Sample and a Drum Machine,” writing songs with titles like “Best Years (I Care)” and “These Are My Adventures” instead of “Audio Coke” and “Spit Forever,” which dominated his early releases. “A Captured Moment In Time” finds him tackling a variety of issues â€“ including politics, romance, and hip hop commercialism â€“ but he still sounds best when he’s playing the every-man and taking you through his daily struggles.

The opening track, “Claim to Fame,” has a nice beat of jazz guitars that rise and fall over mellow strings but is held back by a mediocre lyrical outing by DL. The subject matter is an attempt to be thought provoking, but it comes across as trite instead of insightful, with banal lines like, “In the Middle East the forecast calls for gunshowers / My attitude sours towards these warlords.” DL finds his groove on “Too Late Now,” the third Techtwelve beat in the first three tracks, where piano chords and arpeggios roll around a sped-up vocal sample and the rhymes focus on the day-to-day living that can grind you down. DL sounds much more comfortable here as he ruminates on his future in hip hop.

“I woke up early in the morning, got a yearnin for herbs
But need somethin in my system just to calm my nerves
For eight hours I’m drownin in the real world
Hunger for my next break so I can finish this verse
Is it a gift or a curse if your co-workers
can go home after work and not be disturbed?
I go home but I always hit the studio first
Lay a verse on the social fabrics of this earth
We converse in reverse about things in the past
Started this with a dream and minimal cash
Now what’s left is the dream but no more cash
I spent my emergency stash on my last track
You ask about the next man, I wonder
Every time I write I feel like it’s my last summer
Time to move on to something other than rap
But when I think that, the music keeps pullin me back
Can another career choice give me such joy?
Like all around the world the folks know my voice
I remain poised, block the noise of city traffic
Keep tellin myself one day it’s gonna haaaappen
But it haaasn’t”

When DL sticks to first-person narratives and inner dialogue, he succeeds more often than not. “Made it Through” is the only weak beat on the album, with its awkward synths, but the lyrics are on point as they detail DL’s relationship with hip hop and life in general, including a couple digs at his absentee father (“When I pass on my genes to grow my family tree / finally I will be what my father could never be”). “Owe It All To You” slows things down with an awesome swung drum track, lazy strings, and heavy low-end bass. On this one, DL gives props to those who helped guide him on his way, including his brother and his mom who passed away. Once again, he’s not doing any lyrical backflips, but he is constructing sincere rhymes that let you in on his perspective. “Atmosphere,” featuring Theology 3, is about as hard-hitting as the beats get on this album, with in-your-face horns and insistent drums, and DL spits about his own genuineness in the face of hip hop culture’s cookie-cutter personalities:

“Flow like a pimp, Howard played a hustler
But I play myself with the courage I mustered
To get through to you, should this be chopped and screwed?
Played at a slower speed to catch the loop?
Are we all aloof, a parody, a spoof?
The life they depict is just not true”

While this is definitely an ear-pleasing album, the music is all pretty tame, as are the lyrics for the most part. This isn’t necessarily a bad thing, but it does prevent the album from being particularly compelling. It’s the kind of music you can throw on in the background of virtually any situation without offending anyone, which can be taken any way you want.

I’m sure Canada deserves more attention than it gets within hip hop. I’m sure there are plenty of talented rappers out there just waiting to carry the torch, from Kardinal Offishall to Swollen Members to K-Os. I’m also sure that DL Incognito is not going to be the one to break on through. It’s not because he’s doing anything wrong. In fact, he’s a capable MC with consistently dope production behind him over the course of his four albums. He just lacks that certain je ne sais quoi to make him stand out from the pack. His lyrics are good enough but not particularly intricate; his delivery is not going to jump out and grab you by the throat; and his laid-back vibe lacks the swagger to make it infectious. Yet even despite all that, “A Captured Moment In Time” is still an enjoyable listen from beginning to end that proves why DL is four records deep. Just don’t expect to be dissecting it on your headphones for months on end â€“ that’s not DL’s M.O., and that’s fine by me.