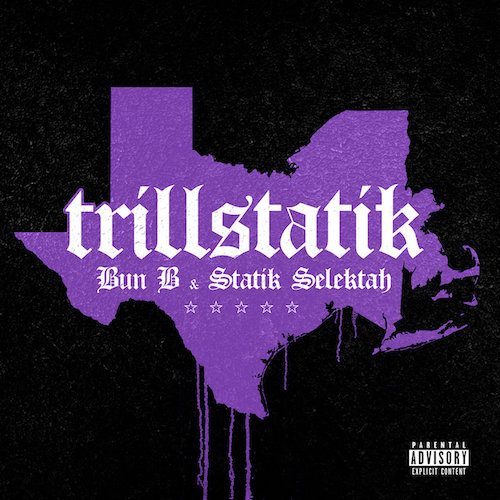 Upon first receiving word of the collaborative album “TrillStatik” between Bun B and Statik Selektah via Show Off/EMPIRE, I immediately noticed there was some online clamor about the purported mismatching of the pair. Basically, these people were skeptical about a southern rapper from Houston over some traditionally sounding east coast beats. However, their skepticism told me one thing: That they hadn’t listened to the catalogues of either artist. Had they done so, then they’d also know how both of their careers have intersected several times. Bun’s been a guest on most of the Massachusetts native’s compilation albums for more than a decade now. Additionally, he’s previously shared mic duties with east coast wordsmiths such as Jay-Z and Apathy. Their official full-length collaboration takes their merger beyond just the album name and cover (which combines Texas with New York and Massachusetts). It takes it to an atmosphere that is enough to satisfy most die-hard hip-hop fans.

The first track, “Moving Mountains”, drops the heavy load to shut down everyone who viewed their collaboration with cynicism. Bun is unmistakably southern, but has a proven versatility that allows his forceful voice and flow to ride Statik’s boom-bap fashioned beats with very little difficulty, if any. “Still Trill” has a playfulness to its bass line which reminds me of “Put Up of Shut Up” by Gang Starr. Furthermore, I don’t think it’s mere coincidence that guest rapper Method Man shouts out Premier and Guru in the opening lines for his verse. Fellow NYC rapper Graph also has a guest verse on the song and hasn’t lost his penchant for wordplay. The east coast guest affair continues (and does so for most of the album) on “Basquiat”, featuring Fat Joe and Smoke DZA. Stat’s production here makes use of piano samples and lifts two different drum sample patterns. Of the three emcees, Bun and Joey Crack sound the most comfortable in keeping up with the beat and its changes.

Although contrast is a given factor on any album with multiple artists, it was most evident for me on the track “Concrete”. The production is smooth and is driven by a jazzy piano sample, but what I mean by “contrast” is guest rapper Westside Gunn sounding very similar to AZ and then juxtaposed with Bun’s much deeper voice and commanding flow. Massachusetts-based rapper Termanology takes care of the last verse and rounds out the song. Production-wise, the two hallmarks of “Money” are the guitar sample and the Chipmunk sped-up vocal sample of “money!” interspersed throughout the track. Lil’ Fame helms the first verse of the song and his trademark boisterous NYC flow instantly pulled me in like a tractor beam. “Superstarr” features Meechy Darko, C.J. Fly, and Haile Supreme. Bun outshines them as far as the vocals go, but the most standout part of the track is its airy production. “Paperwork” suffers because of its under-two-minute-length and guest rapper Uncle Murda’s unfocused and loosely political verse.

The album takes a needed respite from its east coast guests on “T.B.A.”. Bun enlists fellow Texans Propain and Killa Kyleon to murder what has been perhaps the most grimiest street beat on “TrillStatik” so far. “T.B.A.” (which stands for “Texas Bar Association”) showcases the talents of both guests. Both are equipped with wordplay and high energy, but it’s KIlla Kyleon on the last verse who steals the show:

The final two tracks on the album are “Time Flies” and the lead single “I Know”. The former has a very mellow production with guest verses courtesy of Big K.R.I.T. and Talib Kweli, who is the better of the two with a verse that big-ups hip-hop’s fallen soldiers like Mac Miller, Pimp C, Phife Dawg, and Nipsey Hussle. “I Know” has a similar production in that it’s melodious. Featuring Haile Supreme on the hook, the song’s accompanying video contains visuals that are as syrupy and purple as the drank itself:

Overall, “TrillStatik” will certainly placate ardent hip-hop fans, that doesn’t mean that it doesn’t contain flaws. This album consists of 10 tracks (14 if you count the deluxe edition) and is absolutely not lacking when it comes to guest appearances. Every track on here has at least one and, looking at the tracklist prior to listening to the album, gives the album less of a feeling of a joint collaboration and more of one in the vein of one of Statik’s compilation albums. Listening to the album significantly deadened that feeling, but also left more to be desired. The album cover shows Texas merged with two east coast states, nearly swallowing up both. However, the guest stars of the album are mostly New Yorkers and makes me wish we saw more of the Texas side of this merger. Nonetheless, “TrillStatik” is a solid addition to both Bun’s and Statik’s discography.