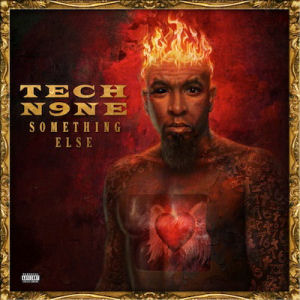 Tech N9ne :: Something Else

Tech N9ne opens “Something Else” like a horror/science fiction movie. It begins with a meteor strike in Pleasant Hill, Missouri. The setting was chosen purposefully so that the impact of the strike “could be felt as far away as downtown Kansas City” with “tremors in high rise office buildings.” N9ne is the most famous export of the KC rap scene, and the top star of the Strange Music imprint, which is itself headquartered in Lees Summit, Missouri (where the “impact” would no doubt be felt as well). A creeping mist unnerves the reporter on the scene, as well as the sky changing to an unusual burgundy color. Those things are potentially frightening even without a meteor strike, but the implication is of course that what’s unfolding on the album is extra-terrestrial in origin.

“Since 2001, my people +Dodged+ me like +Durango+
Now at my show I see more N-words than +Django+
From Missouri! Like Nelly, Chingy, and +Chain Hang Low+
But Kansas City, somewhere OVER the rainbow!
I’m in yo’ house baby – I’m in yo’ living room
Lookin down yo’ blouse lady – and everybody is in tune”

It might be easier for some people to understand Aaron Yates if they perceive him as an alien – a man who professes on “B.I.T.C.H.” to be “putting all the facepaint I can put on.” He’s known for his deliberately wild physical appearance, at times sporting brightly colorful mohawk spikes, which may cause stereotypers to confuse him for a punk rocker instead of a hip-hopper. Tech N9ne relishes this kind of cross cultural confusion and revels in it, refusing to conform to any standard other than his own. The news reports continue throughout the album, at first disturbing (vandalism) and then positive (decreased crime and increased school attendance). N9ne won’t profess to being either positive or negative, simply stating “I’m Not a Saint”:

“Animosity surround me
And it’s all because I found me
How deceptive can the clown be?
Enough to lead to frowns upon the face of those who found me
So much evil in my mind state
Many think they can define hate
But can not tame the wicked primate
Who preaches simple thoughts and lead the listeners on blind faith”

Does that make N9ne a cult leader? He certainly has a cult following. He’s regionally popular but nationally recognized, and able to tour off the strength of his own name without having to partner up with anyone else. In fact most hip-hop tours wish they could have him as a supporting act to tap his popularity. That devoted cult following explains both the size and description of “Something Else” – that is that this album is offered on on Amazon

as a 26 track, 84 minute long “All Access” edition including all songs from deluxe editions and pre-orders in one shot.

Is “Something Else” excessive? Not for a 20+ year veteran who has been a certified star for at least 14, and not given how many guest features factor in. It’s a sign of Tech’s confidence that the lead single “So Dope (They Wanna)” gives equal time to Wrekonize, Snow Tha Product and Twisted Insane flowing over the Shane Eli/Jon Pakfar beat – and Tech’s flow on the opening verse shows he hasn’t slowed with age. The guests reflect his eclectic musical personality as well. System of a Down singer Serj Tankian sings the hooks on “Straight Out the Gate.” Popular pop crossover rappers B.o.B and Wiz Khalifa join him on “See Me.” Kendrick Lamar joins in on the thumping drums of “Fragile” and he forms an all-star team with Cee Lo, Big K.R.I.T. and Kutt Calhoun on “That’s My Kid”:

“If my kid has a problem
It’s up to me as the guardian to go solve ’em
Make my life and involve ’em, late at night when I call ’em
I like to hear them say ‘Daddy, your song is awesome!’
Instead of, ‘Gangbangers in school won’t let up.
I’m fed up; I’m wondering if you can come up and red up.’
You shut up! Negativity can’t be found
inside of my angels, even though I was stupid, but I put it down”

I wish it were less rare than it is for popular rappers to devote album time to being a positive male role model, but N9ne’s frank honesty about being less than perfect yet still showing love through unending love (and occasionally unpopular discipline) is an exception rather than a rule. As Tech N9ne is a rapper who likes to buck trends rather than follow them, this song makes much more sense coming from him than if say Lil Wayne were to stop rapping about skateboarding and eating pussy to make songs about teaching the youth.

Yates also refuses to bow to convention on his beats, maintaining a consistent sound largely through Seven’s production. Occasional big names like Drumma Boy or Fredwreck contribute on a track or two, but never dominate. In the end the conclusion one draws is that the meteor strike is much like Tech N9ne himself. You may find him scary and disturbing at first, but that facade covers a much deeper and complex persona that is largely positive – though he does still like to party and fuck bitches too. On the balance though Tech N9ne’s single greatest attribute is his individuality – showing yet again why his unique look sound and style attract followers. Tech is a true rebel rocker in an era of homogenized hip-hop.