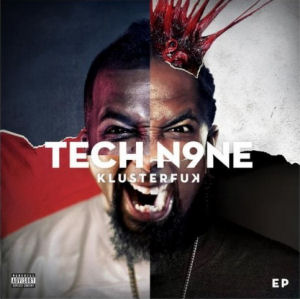 If Aaron Yates wasn’t constantly busy, I don’t think he’d know what to do with himself. He’s a relentlessly increasing ball of energy, and the only way to siphon off that excess output is to hit the studio and keep recording music. That’s why just four months after dropping “Welcome to Strangeland” and nine months after releasing the MASSIVE “All 6’s and 7’s” album, Tecca Nina is back with six more tracks and a “Klusterfuk” EP. This time he’s enlisted the help of the ¡Mayday! crew to provide all of the production. If you’ve heard the “Strangeland” album you will already be familiar with them, but there’s fair chance you’d recognize Wrekonize from miscellaneous underground rap records regardless. Anyway N9ne uses the opening and titular track from this album to explain the whole “Klusterfuk” concept:

“I was born in November, 8th day, 1971st y’all
9 o’clock in the morning, a Christian girl in Kansas City gave birth y’all
She taught the kid how to love, and give up praises to our maker ’til the Earth fall
Then momma married a Muslim, and I was 12, and the transition was the worst y’all
I converted to Islam, but every once in a while I’d read a Bible verse y’all
How am I to refrain from eating pork and having Christmas when I thirst all
All of this it was blended, many religions, plenty women down my shirt y’all
At home no longer attended, when I was 17 I bounced like a Nerf ball”

Tech validates any confusion he may feel emotionally or musically as a result, and in turn you as a listener are expected to do the same when you consider his range of influences – everything from punk rock to Beethoven. The thing is that this prolific rapper has never needed any validation – not from critics, not from the music industry, not from his fans or anyone else. He left the same people who said a top flight rap star couldn’t be from Kansas City in the dust ten million records sold ago. Tech’s listeners have long since embraced his contradictions, as have his fellow artists, which is why he can count everybody from Lil Wayne to the SubNoize Souljaz as his homies. One thing they ALLhave in common is liking to party, which is what the finger-snapping “Blur” is all about:

“Got a call from Stevie, y’all know his steezy
Said he ’bout to come to K.C. and wanna have a get together, that’s easy
Got a little Cabo Wabo, some biz and CÃ®roc yo
They wanna have it at my house, is there room for Frizz and Picasso?
Hell yeah, come on down, told Makzilla that we done on rounds
We gotta get mo’ liquor, spread the fun around
We ’bout to kick it with family, put the gun on down
Nigga, I ain’t kicked it in eons, dis ’bout to be cooler than Freon
Got another call from my homeboy in Denver named Dion
He just pulled into K.C. sayin he’s double fisted with bottles
I told him I was on liquor duty and Stone’Dem was on models
All of my niggaz ready for action
When I woke, I don’t remember this crashin
I can try to tell you in the next verse
but I don’t really know what happened…”

If you’re a strict teetotaler you’ve never had a night like that, but most people who have consumed alcohol before have had a night like “Blur” – you remember having fun last night but the details are a bit fuzzy. Tech wakes up feeling sick and a little bit beat up – that happens too. Just like DJ Quik in “Tonite” though, he’s only going to regret that feeling until the next time he parties. “Can’t Stand Me” is a much shorter song (under three minutes long) but it’s definitely not about self-hatred for his excessive indulgence. The Plex Luthor backdrop is the set-up for Tech to discuss “mom and daddy wanna ban me” even though his fans use his music therapy. It’s not he who “Can’t Stand Me,” it’s all the racists, haters, and uptight parents including “your greasy ass granny” who think Tech is the worst thing ever.

The repeated refrain throughout “Klusterfuk” is acceptance and approval, which is a bit surprising since with only six tracks one wouldn’t necessarily presume such a strong theme would come through. Out of the first five songs though, only “Blur” deviates greatly from that topic, and one could even argue from the opening bars of that song that Tech was drowning his problems in alcohol to avoid the emotional wreckage of a “bad day with my bitches.” Well if he wants to feel like an “Ugly Duckling” to have something to talk about, far be it from me to stand in the way of his musical inspiration. Let’s be clear though that Tecca Nina has always worn his freak badge with pride – after all there aren’t too many hardcore rappers who rock a spiked mohawk. Maybe his family or peers treated him like an outcast growing up, but after a career spanning three decades I think it’s fair to say he has long since achieved the acceptance he craves. In 2012 he’s only the outsider because he purposefully chooses to be.