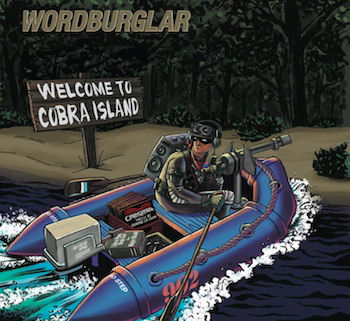 If you wanted a celebration of the campy Sunbow cartoon series version of G.I. Joe, complete in all its “YO JOE” and Sgt. Slaughter glory, you were probably disappointed with the big budget slick Hollywood movies that came out in the last few years. All the action provided by Channing Tatum, Christopher Eccleston, Bruce Willis and The Rock couldn’t bring back the rose-tinted memories of the cheesy “knowing is half the battle” morals, or the over-the-top voice acting of the Cobra Commander provided by Chris Latta. (Side note – this man DEFINED my childhood – he was also the voice of Starscream in The Transformers.)

Wordburglar’s “Welcome to Cobra Island” is the more fitting tribute to that era of 1980’s cartoons, when we all sat in front of crappy standard definition TV sets, with only the channels you could get over a pair of rabbit ears. The animation looks cheap now, but with fuzzy reception, they seemed like Real American Heroes (and villains). Our protagonist SJ goes out of his to work from the background music and loop it to rap over, which gives you a chance to appreciate it in a whole new light. What might have been an incidental set up for a recon mission in the jungle now becomes the spooky backdrop for “That Guy With the Disguises,” thanks to the expertise of partner-in-crime Savilion.

“I don’t roll with role models
I roll with those prone to throwin barrels
Bad omen; catch me roamin at your own peril
My bow and arrow’s zoned at your bone marrow
You know something’s up – like you just got shown tarot
No dinero – might wanna leave the coke alone
Before these local yokels go postal in your mobile home
Change clothes, next thing you know I’m your total clone
Cloaked in your cologne, on your phone, in your vocal tone”

Given the album’s title it’s not surprising that the baddies are so prominently featured on “Cobra Island,” and to be fair they were always more interesting than clean cut babyfaces like Flint and Slip Stream. You might cheer for the Joes, but without larger than life enemies like Destro, what would you have for them to do? “From satellites plants that grow to massive heights/Got what you need, and always get my asking price” quips Wordburglar on “Call Destro,” which is exactly the kind of sales pitch he needed on the show. “I even helped create Serpentor!” That should be on his business cards. Beatmason laced this one perfectly.

When good guys are addressed, they tend to be the more edgy members of the team, such as the three part series “A Letter From Snake Eyes.” Each installment is good, but Timbuktu’s beat on the third was hot enough to be included on the latest Grandpa Funnybook mixtape. There aren’t a lot of guests on the album, which would just get in the way of the tribute that Word is going for here, but I don’t mind Rift’s rap on Beatmason’s “I Don’t Wanna Go to Cobra-La.” The direct jack of G.I. Joe’s most familiar melody may bring a tear to your eye, bringing back fond childhood memories of drinking the sugary milk right out of your cereal bowl while watching Saturday morning cartoons. Two thumbs up to Wordburglar – a Canadian who celebrated a jingoistic American cartoon that’s grade A cheesy but also grade A fun.