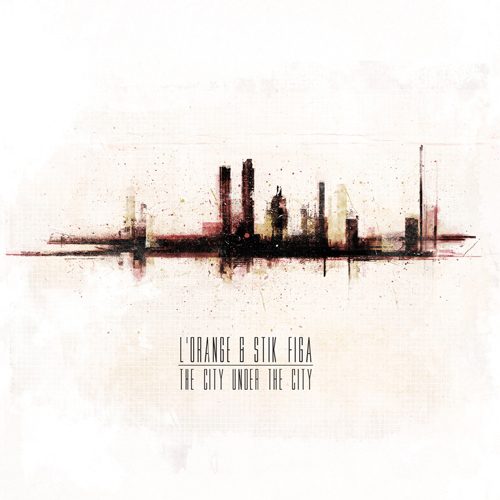 L’Orange & Stik Figa :: The City Under the City

“You turn down a dark alley, seeking refuge from the sweltering heat of the factories that line the city streets. As you wind through a maze of alleyways, darkness falls and the sky glows a toxic orange. You hear music coming from behind a door at the end of a dark and narrow tunnel. You know that once you open the door and descend into a world beneath the concrete, you will never be the same. This is The City Under The City.” Stik Figa is the prototypical example of an emcee who would be better known if he wasn’t from the Midwest. I don’t like writing that because it’s my own stomping grounds, but I truly believe if he were from Los Angeles or New York instead of Topeka, Kansas more people would be riding his dillz. Even adopting rap mainstay Memphis as his second home hasn’t brought more attention his way, nor has becoming a focal part of the Mello Music Group roster. “The City Under the City” aims to change that.

yU the 78er. For Stik Figa there could be no better fit – an up-and-coming rapper needing more exposure building with an up-and-coming producer who has a reputation for digging deeper than most. The result is delightful songs like “Decorated Silence” featuring Open Mike Eagle, which horn breaks that sound like they come from a swinging 1930’s jazz club. Over the soft layers of sound on “Blind Tiger,” Stik comes out swinging:

“Hopeless hearts broke, anxious, dip your toes with sharks
I’m floatin in the ocean on top of shards – Noah’s Ark
Ride the wave, cautious, then I set sail
Arrived on dry land, walking on a eggshell
With led bells, blowing the whistle, man I just left hell
Nothing to regret well except maybe that death smell
Behind the red vel’, enjoying the best seats
The rest grieve; nothing to show for it but prestige
Wonder what success brings, I go against the jet stream
Knowing one man’s nightmare is another’s wet dream”

Stik is a thoughtful and meticulous rapper, carefully constructing his points for maximum impact, and if you had to hold one and only one thing against him it’s his occasional tendency towards monotonal delivery. Thankfully guest appearances shake things up – Rapsody on “Before Midnight,” 7evenThirty on “One of Them” and Has-Lo on “Stone Like Me” just to name a few. Throughout the album L’Orange pulls vocal samples that sound like movies that came just after talkies pushed silent flicks aside. I’ve read at least one description of L’Orange as the “film noir” producer and I feel it fits. Together with Stik Figa they push raps out through “Dusty Speakers.” L’Orange even shows off his audio pastiche on solo songs like “Bravo Bravado,” but it’s when the two team up that the true magic takes place.