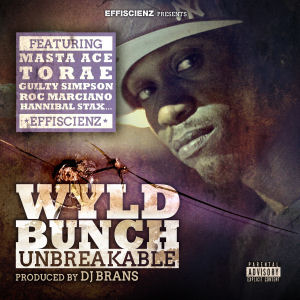 You would think Wyld Bunch was a group of rappers on some rowdy flex, but despite this promising premise Wyld Bunch is ONE dude. Crazy I know, but Wyld Bunch sure has the energy of five men, providing a gritty record that feels so tough, so street-smart, that you’d think the CD was actually unbreakable. Originally an EP that culminated from building a rep in the underground scene (2011 saw the release of a free EP with DJ Soulclap called “Life”) and regularly receiving airplay from the GOAT himself – DJ Premier – it is easy to dismiss Wyld Bunch as just another street rapper in the vein of Ruste Juxx. For the most part, Wyld Bunch rarely strays from this stance – “Hard On The Beat” is nothing more than a dick swinging contest with fellow 90s tribute act Dirt Platoon’s Raf Almighty. Despite this, DJ Brans (who produces the first 8 tracks – the original EP) really impressed me throughout with his grimey backdrops. Granted, if that East Coast boom bap isn’t your thing then this record isn’t for you, but if some hard beats, deft scratches and street raps get your neck snapping like mine does, “Unbreakable” gives and gives.

“Long Time Ago” is well produced by DJ Brans, minimalist in its approach but certainly benefiting from Wyld Bunch’s emotive “I feel like a dinosaur” delivery documenting his feelings towards what hip hop has become. A truck-load of rappers have rapped about hip hop’s so called demise, but it’s always nice to hear somebody say it in a way that acknowledges it was a long time ago that this “Golden Era” happened – let’s move on. Underground stalwarts Guilty Simpson and Masta Ace provide added authenticity to “Skillz” and “Can’t Please Them All” respectively, but are careful not to steal the shine from Wyld. Torae sounds gruffer than usual on “Beast’n”, providing a standard Torae verse full of boasts and hustling that is so confidently delivered that the track feels like it his with Wyld Bunch featuring, rather than the other way around. “Keep It Movin'” is perhaps the most authentic joint on the album, consisting of a minimalist production from Brans and a suitably laid-back verse from Roc Marciano. This is only boosted by DJ Djaz’s swift turntable scratches, getting Xzibit and Pharoahe Monch involved, whether they like it or not. They should do, because it’s a brilliant slice of New York rap. While “Keep It Movin'” shows Wyld Bunch holding it down with plenty of assistance, “Get It” shows that perhaps he needs the help, as Wyld Bunch provides a cringeworthy hook.

Each track is remixed by a variety of underground producers, which I’ll briefly cover – “Can’t Please Them All” is flipped by Azaia, with a grimey, dread-filled beat Black Moon would happily catch wreck to. It doesn’t really suit Masta Ace, who is more often heard these days atop lighter, string sampled beats, but it works well with Wyld Bunch. “Skillz” has an inferior beat from DJ Lowcut that is devoid of energy, feeling more like something Wyld Bunch would freestyle to. “I Do Not Fail” is remixed by Venom, and suits Wyld Bunch more than the original production. Whilst DJ Brans’ original is a beat that offers an opportunity for reflection and street stories, Venom has gone for the moshpit approach and combined with Hannibal Stax’s menacing presence, it feels a lot like a hard Marco Polo track. Kyo Itachi rejigs “Hard on the Beat” but doesn’t really add anything to what prevailed in the original collaboration. It’s not bad, it’s just more of the same. Flev brings a heavy handed approach to the “Beast’n” remix, with crashing drums reminiscent of Endemic. Despite a more industrious sound, it gives energy to Wyld Bunch’s verse that sort of pitters out on the original.

Wyld Bunch has brought together some of the underground’s most respected emcees to help him give fans that traditional New York sound, and it will certainly appease fans of that style. Plenty of scratches from DJ Djaz, grimey production from DJ Brans and rugged rhymes from Wyld Bunch give the record that 90s feel, but a few tracks sound lifeless and generic. Regardless of this, there are tracks here that any hip hop fan will find hard not to enjoy – the Venom remix of “I Do Not Fail” is, excuse the French, fucking sick. “Keep It Movin'”, “Can’t Please Them All” and “Long Time Ago” are all strong and the added remixes help showcase some of the underground’s hottest beat-makers, but given the limited content it does leave me wondering whether a full-length record from Wyld Bunch would be as interesting.