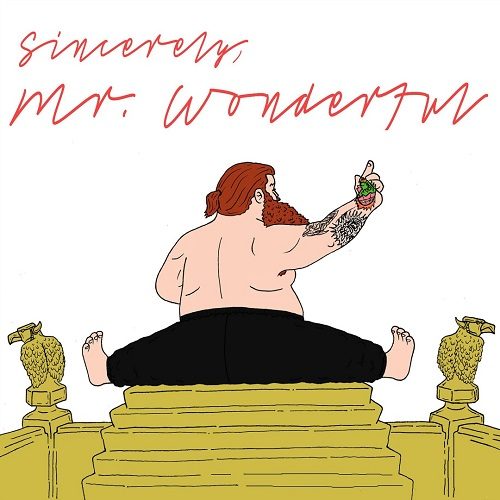 In professional wrestling, athletes perform nearly every night. They become a different character, taking on a different name, identity and style of dress. Nearly every night, they get inside that ring and tell a story with their bodies. In hip-hop, the same principles apply. Except, touring notwithstanding, artists don’t perform nearly every night and their ring is a booth with a microphone. Both areas are male-oriented/dominated arenas and offer a form of escapism for the artists and their spectators. They’ve intersected over the years with varying degrees of appeal, from the Insane Clown Posse to Randy Savage’s “Be a Man” to John Cena’s rap gimmick.

So when Action Bronson dropped a song a few years ago titled “Barry Horowitz” and decided to call his latest album “Mr. Wonderful” (That’s a Paul Orndorff reference, y’all), all signs pointed to him being a man my age who not only knows classic wrestling history, but knows how to make the right kind of hip-hop for such references to be laced with.

The Queens-raised emcee has had quite the solid output of music for the past four years. From his digitally-released solo debut “Dr. Lecter” to prolific guest features to his collaborative ‘mixtapes’ with fan-favorite producers such as the Alchemist, Statik Selektah to Harry Fraud, his inclusion in XXL’s annual Freshman Class confirmed his future with the big-league major labels. To further add to the pro-wrestling parallel, Bronson has been in several independent promotions before he signed a deal with Atlantic’s WWE. It’s certainly a valid notion that signing to a major after a string of well-received indie releases can provide a deleterious effect on the quality of future releases. It’s valid, but not always true. Little Brother released “The Minstrel Show” when they were signed to Atlantic and, for me, that’s their best album. Though Bronson does try new things on his first major-label outing, he still includes his characteristic lyrical qualities along with elements from past releases. In a sense, he’s re-introducing himself.

“Brand New Car” starts off the thirteen-track album and I found humor in both how Billy Joel was flipped for beat and the track’s placement on the album. The lyrical themes are as conventional as anything we’ve heard from Bronsoliâ€“o: His money, his love for exotic weed strains, food references, B.H.O., and staying true to his Flushing, Queens roots. There’s a humor and heart in his verses as well as the oft-mentioned Ghostface Killah comparison in terms of his voice, flow and delivery. His lyrics are seemingly stream-of-consciousness, but they all flow together nicely. Statik Selektah laces “The Rising” with a thumping gospel music sample. This also marks the first appearance of Big Body Res (Bronson’s cousin) on “Mr. Wonderful”. He gives a hilarious ad-libbed outro that only scores more points for the song:

A psychedelic guitar sample and dusty drum samples comprise “Terry”; a quite mellow track produced by the Alchemist and the first of his three productions to appear on the album. The examples of Bronson trying new things are collaborating with Drake producer Noah “40” Shebib on “Actin’ Crazy”. At first, I thought it was a Harry Fraud beat and it’s the closest that the album comes to having a mainstream sound.

His ambition is magnified on the three-part “Thug Love Story 2017 The Musical”. I found this to be one of the highlights of the album as Bronson goes full-throttle conceptual in this trilogy. Starting off with “City Boy Blues”, producer 88 Keys has Bronson singing (yes, singing) in a lo-fi echo in what sounds like a 1970’s funk-bass number. The music is certainly a throwback and the sung lyrics concern a certain succubus, which could be an allegory or an actual woman. “The Light in the Addict”, a clever play on words, is backed by a Party Supplies melancholy piano driven beat reminiscent of Ant from Atmosphere, as is the theme of the pain of addiction, be it drugs, women or money. The closer, “Baby Blue” is laced by British producer Mark Ronson. More upbeat than the previous tracks, it serves as Bronson’s “fuck-off” to no-good women while elevating himself. Chance the Rapper is featured and on the last verse. He dishes out some hilariously hateful barbs worthy of the ‘Player Hater’s Ball’ from “Chappelle’s Show”.

Bronson, like many of his fellow NYC artists, laments the lack of east coast hip-hop on radio airplay, even in his hometown. He waxes about this on “Only in America” over an ill guitar sample looped by Oh No. The Alchemist’s latter two tracks on the album seem playful, but pretty lackluster. “Falconry” has a bounce to it and a nice keyboard sample while “Galactic Love” seems to be a leftover from the collaborative record “Rare Chandeliers”. The point is that neither these do much for me when I listen. The end of the album is capped off with the much-talked about first single “Easy Rider”. The preceding track served as a musical prologue to the end and, once it kicks in, it hits hard. “Easy Rider” is classic Action Bronson: Gritty, unconventional sampling with cocky and grimy lyrics. Driven by an unique sample, its music and accompanying video are like Dennis Hopper’s film converted into hip-hop form:

In my intro, I used professional wrestling as an extended metaphor for record labels, Bronson’s journey through them as well as his references to wrestling. For over a decade now, NYC hip-hop has been losing the “Monday Night Wars” to other regions, particularly the south. To take it a step further, Bronson and Joey Bada$$ may be proponents of an “Attitude Era” for hip-hop. They represent their native region uncompromisingly and with a reactionary, righteous indignation at being ignored and misrepresented. Hip-hop is said to be cyclical, and if more artists continue on Joey’s and Bronson’s trajectory, then the music can overcome its almost-stoic resiliency and at last, move somewhere else in the cycle.