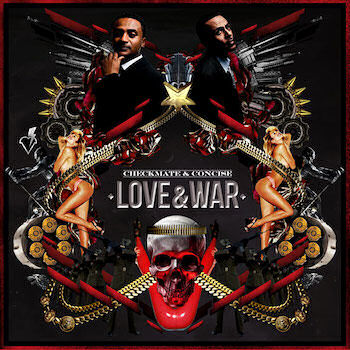 “Rascalz, Checkmate, Kardinal and Thrust/Choclair coming down with that Northern Touch.” If that sentence rings a bell then you remember a Canadian crossover hip-hop song from 1998 that is credited with sparking a commercial resurgence in the Northern hip-hop scene. The odd thing is that not everybody on the song benefitted from that bounce to the mainstream equally. The Rascalz certainly cashed in by adding the song to the re-release of “Cash Crop,” and both Choclair and Kardinal Offishall have made some big albums, but Checkmate and Thrust both seemed to disappear quickly – each dropping an album in the early 2000’s little covered outside Canada.

For all intents and purposes it seems Thrust retired from the game to be a teacher at the Harris Institute in Toronto, but Checkmate is still making records almost a decade and a half after “Northern Touch.” I had to double check at first to make sure I wasn’t confusing him with the similarly named Australian artist, who has been much more commercially active than his namesake. This is the same Checkmate from Vancouver though, resurfacing (at least to my knowledge) out of nowhere with fellow artist Concise, going by the name Defenders of the Faith when rocking as a duo. “Love & War” is the product of one such collaboration, though they are billed individually and not by group on the CD.

“Space Odyssey” opens more like a Defender of the arcade, for those old enough to remember the Williams video game. The beat and vocal manipulation are a throwback in another respect – it’s a dead ring for “2000 Fold” by Styles of Beyond. The song is a prelude to the album’s biggest cameo appearance by Royce Da 5’9″ on the track “Big Time.” I’d be happy to provide you a Soundcloud, Bandcamp or YouTube sample if there was one – and since there’s not I’ll offer you a snippet of Royce’s lyrics as quoted below.

“I’m a awesome possum
I’m also disgruntled when you come and dig a ditch
How you come across
is like walking across my carpal tunnel – get a grip
Not U-way (not U-way) you want peace now?
It’s too late (it’s too late)
I’m too paid, I’m from Detroit
where they kill niggaz over Cartiers and Kool-Aid”

The rest of the guests aren’t as easily recognizable but make worthwhile contributions, such as Fizal Stars and P. Jericho over the super mellow “Congratulations.” I’m also digging the slightly dirty drums of “100 Grand” featuring Realm Reality, and the ominous bassline and repeated “It’s so dark/it’s so dark/it’s so dark/where we are” chorus of “Grand Alliance” featuring the aptly named Evil Ebenezer. For at least 50% of the album Concise & Checkmate share the spotlight, which makes the songs like “Spit Game” that much more of a treat, complete with a nearly Texas style chopped & screwed treatment.

Concise: “Spit game so dirty, my chick so purty
Hustler, my repertoire; your chick, so flirty
Game tight and I know it, pay me and I show it
Pay me and I kill ’em at the necessary moment
Goin through my paces I’m not worried ’bout you haters
I’m so sick makin rash decisions runnin out of patience”

Checkmate: “Born to live, fresh to death
Head and shoulders above the rest
I’m number one, second to none
They hate me more, I love ’em less
Got no time for no fake shit
Break it down like bacon bits
We in the streets, you in the sticks
You makin love, we makin hits”

I presume I’ve got the emcees right, but if not then I guess flip the attributions and forgive me for not having heard Checkmate in so long. I can’t find anything else on the site we’ve reviewed by Concise so there’s even less of a point of reference there, and this super slim CD cardboard sleeve has little details. In fact before this album I was under the impression Concise was a producer, but the only credits on the back cover are “mixed by B. Morales” and “mastered by Ryan Dahle” so I can’t even tell you if he did all, some or none of the songs. What I +can+ tell you is that this album, much like Checkmate’s return, was a pleasant surprise.