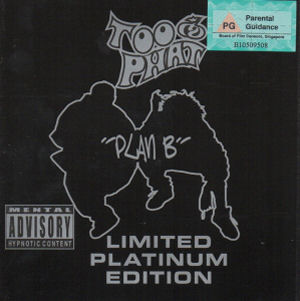 When you think of hip hop, what countries besides the US, Canada and the UK spring to mind? Of course Australia has many artists, you might even be aware that France, Germany and other European countries have long established hip hop scenes. How about Asian countries? It might not surprise you to read that Japan has numerous local artists, but how about Hong Kong, China and The Philippines? Yep, all have their own fair share of mic wielders.

Not only do the bigger Asian countries produce rappers, but smaller nations like Cambodia and Malaysia have a sprinkling of artists involved in the once exclusively American music and culture. One of the better known Malaysian groups was Too Phat (who disbanded in 2008), and the album I’m taking a look at here is the “Platinum Edition” of their 2nd album called “Plan B” (from 2001).

How did a CD by a Malaysian crew find its way into my collection? I’ve always had a curiosity about international hip hop and, as such, every time friends went overseas I’d ask them to bring back some local hip hop from the country they visited (I’ve also had a couple chances to do that myself). Hence, some years ago a friend returned from a Malaysian holiday and dropped the Too Phat CD in my lap.

Right off the bat I have to say that this album doesn’t scream Malaysia or even Asia in general at me. Some non-American artists wear their nationalities on their sleeves via their music, others could (by design or accident) pass for American artists, and some don’t make an effort to fall into either category â€“ Too Phat belongs in the “we’re pretty American” section. Yes, the charismatic, nimble tongued Malique and somewhat more orthodox Joe Flizzow rap in American accented English (Malique to a greater extent), which is often seen as a blight on non-US artists, but it may well be a natural enough voice for these guys, given that countries such as Malaysia and The Philippines take some American influence into their day to day spoken English. However, I suspect Too Phat actually exaggerate their accents when rapping and throw around jargon like “what the dilly?” to suit what is seen as “universal rap speak”. I’m ok with Too Phat doing this, as I personally think it’s far more pretentious, if not ridiculous, to hear an Australian or Brit rapping in American tongue, versus someone whose nation’s own English comes with an American touch.

Accents aside, there isn’t much overall local influence in the album’s material either; the guys aren’t waving lyrical Malaysian flags, in fact there is only one single solitary reference to the country on the album â€“ they mention “a girl from Penang” in the last track. Okay, there ARE two spoken interludes in Malay, and also and a couple brief moments of inter-track chatter in the language, but that doesn’t steer the overall feel of the album in that direction. One of those interludes is a mock “Who Wants to be a Millionaire?” TV show dialog, which leads into a track called “Illion”, where Too Phat tell us what they would do if they had Jay-Z bank balances, over an annoying Atari game type soundtrack of blips and beeps.

So yes, the album is rather derivative of US hip hop, but there are a couple occasions where Too Phat bring us something original and closer to home; most exemplified by what appears to be the best known song of their careers, “Anak Ayam (Freak to the Beat)”. The song is built around a distinct instrumental sample that comes from a traditional Malay folk song, and this one element makes the song irresistibly catchy.

Something rather important that the video clip indicates is that Too Phat are strong proponents of the four elements (emceeing, graffiti, deejaying and b-boying), so much so that each element is given its own instrumental interlude on the album, each one serving a secondary purpose as a DJ showcase for DJ T-Bone. This is quite significant, as I’ve noticed over the years that countries outside of the US have seemingly had more appreciation of the full range of old school elements that the American scene, in general, has left behind. The four elements have long been at the forefront of hip hop culture in Australia and I know for a fact that places like Germany have also held them as essential ingredients of the art form. Feel free to disagree, but I think the Americans somewhat left the concept of the four elements behind when rap became more conscious and political in the late 80’s, and it was destined to remain in the past when hip hop moved in all sorts of other directions in the 90’s and beyond with gangsta rap, The Native Tongues, R&B tinged pop rap, hard as nails “Timz N Hood Check” hip hop and so on â€“ all of which weren’t particularly concerned with writing names on walls and doing windmills.

Actually the overall feel of the album goes back 10 years before its release, to the lightweight yet skills based hip hop of “Homebase” or “Code Red” era Fresh Prince, or the likes of Heavy D. There’s nothing too hardcore on the album, and aside from a couple tracks Too Phat aren’t dropping jewels of wisdom or getting too introspective or personal. Despite the interludes, they don’t talk about b-boy battles or (graffiti) bombing trains either. It’s mostly rap for the sake of entertainment, partying and showing off rapping abilities.

Speaking of the Fresh Prince era, Biz Markie’s classic “Just a Friend” earns itself a Too Phat makeover here. It’s really not that different to the original, definitely the same sentiments are expressed, but it has a better (i.e. actual) singer for the chorus – sorry Biz. One thing I like about this song is that it further suggests that Malique and Joe are authentic hip hop heads from way back, and it’s also nice to see that Biz records made their way to Asia.

There’s more to the album than remaking old Malay and US classics. The album’s opening track “Boogie Down” is a carnival like, horn laden party track, and it sets the standard for the album’s many rather typical song titles and concepts. Just by looking at the title “Get Stoopid” you’ll that know you’ve heard this type of song 87 times before; it’s no more, no less than our MC’s showing their reasonably impressive skills on the mic, whilst telling everybody in the back, front and sides to “jump around and get stoopid”. The most interesting feature for me is the use of an addictive sample from Lalo Schifrin’s “Enter the Dragon” soundtrack (okay I know The Alkaholiks used it previously on “Let It All Out”, but it’s still NICE). The clichÃ©d song titles continue with “It’s On You”, but the song is enjoyable with a head-nodding bouncy sort of vibe that sees the Too Phat boys trade off verses with a couple guys from another Malaysian group called Teh Tarik Crew (interestingly these guys sound less American). Joe Flizzow drops his best verse on the album on this one, and Malique brings some nice humour in his rhymes too; it’s one of the best songs on the album as far as the emceeing goes.

Whilst we’re talking about less creative song names and guests, we can’t forget about “Wanna Battle?”. This song does actually bring a touch of local flavour by throwing in a generic sounding bit of Asian instrumentation, has a pretty basic beat which features an undercarriage of scratching, and has an urgent, “almost” foreboding feel to it. A handful of local MC’s join Too Phat on the track, and their verses all display hyper speed, tongue twisting Bone Thugs influenced rhyming (Malique and Joe also pick up the pace in their rhymes to match). It’s kind of cool to hear a couple of local female MC’s on here too, but the very US sounding Noreen doesn’t seem to manage the rapid rhyming that well, and she loses me further when she starts overdoing the “Americanisms”, talking about being a “scary ho” and “I’ll stomp on him wit’ my Timberlands”. “Clap to This” also comes from the “Rap Song Names for Dummies” book, but it’s another one that I can’t be upset with. it has a Jay-Z “Hard Knock Life” cutesy kid type chorus and the song features the whistle type sample that De La used in “Keepin’ the Faith” (the same, slightly altered, Bob James sample used by Warren G in “Regulate”). One thing I always enjoy in any genre of music is the mid-song change-up, and “Clap to This” has a nice one which switches to what the guys introduce in the song as a “hard” style. Overall it’s just an enjoyable fun and sunny track, and the supposed hardcore changeup isn’t particularly ominous anyway.

There are a couple R&B laced songs here also. The worst of those being “What you want?”, which is the typical “all the honeys want me now I’m famous” rubbish, and the auto-tune thrown over chorus singer Camelia doesn’t help. “You” featuring veteran Malaysian singer Sharifah Aini is much, much better and has none of the less desirable elements of “What you want?”. It’s a genuinely soulful track, with a lovely retro 80’s R&B sample and feel, and the song is one of love for the families and friends of our MC’s; THAT is how you do an R&B/hip hop track with feeling. On the other hand, “Pinklady” isn’t exactly the smooth ladies track suggested by its title; instead it’s a narrative tale with a moral about avoiding ecstasy pills and the like. What’s most interesting about this one is the production, which is a little bit Warren G flavoured funk meets “Wu-Tang Forever” type haunting loops.

Someone in the US (or elsewhere outside Malaysia) must have noticed these guys after this release dropped; their next album “360°” features appearances from the above-mentioned Warren G, plus Freestyle from The Arsonists, and a couple international artists including Promoe from Sweden’s Looptroop and Weapon X from my neck of the woods Down Under. If you’re not particularly curious about international hip hop, Too Phat’s “Plan B” probably isn’t good enough or unique enough to kick-start your fascination; as I said above, the complete package is not so different to some of the more party oriented, feel good US artists, and the production is rather dated for its time also. Too Phat’s lack of identity doesn’t help them in competing with whoever your US favourites may be either. However, if you are interested to sample from the international hip hop smorgasbord by taking “baby steps” away from the day to day US hip hop more familiar to you, this album might not be a bad transition point from solely American rap fan to worldwide hip hop connoisseur (at the time of writing the CD is available on eBay). Before you know it, like me, you might also be listening to Nuuk Posse from Greenland, Urban Flow from The Philippines, Terror X Crew from Greece and Yin Tsang from China.