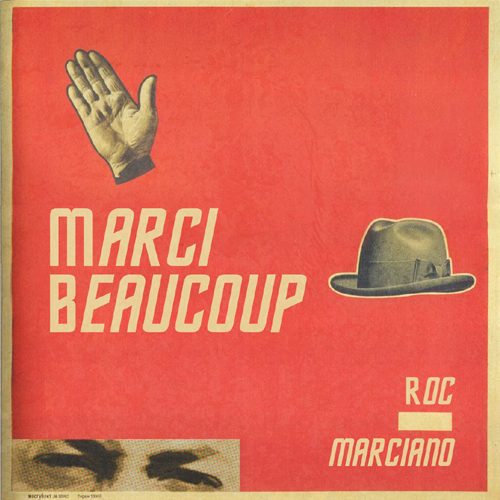 Both 2010’s “Marcberg” and 2012’s “Reloaded” were primarily solo outings, showcasing Roc’s incredible ability to wring every last drop of the English language out of such clichÃ©d themes as spending money, having sex and toting guns. The production on both projects was handled by Roc too, and although it was often strong on its own, it served a purpose more than anything. Largely minimalist, Roc supplied himself with a barebones backdrop with which he could weave his sleepy flow over, but most importantly it allowed his extensive vocabulary to take precedence. With “Marci Beaucoup”, Roc has finally opened the door (which I imagine was being heavily knocked on all year) to fellow street spitters many of his fans will already be aware of. Evidence, Ka, Freeway, Action Bronson and Blu are all firm favourites in the realms of underground hip hop, and who have all flirted with a mainstream audience at some point.

Roc Marciano is a name that’s been slowly getting more media coverage thanks to his critically acclaimed self-produced projects, but I fear this latest release could slip under many radars. Any album released in December is susceptible to being overlooked during a month where many hip hop listeners tend to look back on the year’s best albums, almost as if December somehow falls in to 2014. Perhaps ‘Year in Review’ lists should be submitted in January to truly give us all a chance to catch these albums fully, yet regardless of that option, Roc Marciano’s latest effort would have struggled to crack my Top Ten of 2013. Believe me, I’ve spent a lot of time with this record, but it’s just swaying me.

Initial perceptions when listening to “Marci Beaucoup” are jarring. Production certainly requires a few listens to really click in to place, and having listened to heaps of collaborative projects in 2013 alone, verses from the guests here are largely underwhelming. Nobody really attacks the bait they’re given, as if they are weary of upstaging Roc’s snoozy style. Freeway lacks some of his trademark intensity on “Didn’t Know” which is a big part of what makes him a great listen. Ka is a deadpan emcee at best, yet he sounds even more like he’s just had a lobotomy than he did on “Night’s Gambit”, which is saying something. There’s even a guest spot from Brits S.A.S. (who were down with Dipset/Roc-a-Fella ten years ago) that is a peculiar combination when there’s a slew of better British emcees out there (Leaf Dog or Melanin 9 for starters). Given the disappointing guest appearances, it works to Roc’s benefit as he is as deadly as ever when given a chance to spit, proclaiming that he is ‘rare like a millionaire’s teardrop’ on “Squeeze” and the hilarious “cock-a-doodle-doo, I put my cock to your dame’s doo doo chute” on “Soul Music”. Perhaps I’ve grown accustomed to Roc reeling off rhyme after rhyme where his outlandish narratives somehow impress the further he goes on about his lavish living, that I don’t want to hear a project that’s effectively ‘Roc Marciano and guests’. He’s an emcee that captures the imagination, lending eloquence to generic topics (reminiscent of Raekwon and Nas), and although some guests bless their respective tracks (Maffew Ragazino holds his own on “Dollar Bitch” in the presence of a rampant Roc), you can’t help but feel Roc is a rapper that deserves to take precedence.

As brutal as “Marcberg” and “Reloaded” were, they both came with some brilliant singles in “Snow” and “Emeralds” respectively. These were standout moments that broke up the understandable monotony a Roc Marciano album can inevitably possess, and “Marci Beaucoup” doesn’t have that break. “Love Means” is the closest thing to infectious, something that was evident on the majority of “Reloaded” – the pounding ‘hey baby’ on “Flash Gordon” and the morbid atmosphere on “76” – listening back to “Reloaded” a year on, it could well emerge as a modern day classic and dare I say it, Roc’s finest moment. It was always going to be tough following up an opus like “Reloaded”, and perhaps I expected more of the same. “Marci Beaucoup” is certainly a different animal, seeing Roc take more risks musically which is actually an off-putting listen if only heard once. As a piece of hip hop, this is a good, if not great example of that cold, dirty brand of New York hip hop. It’s disappointing as a Roc Marciano record, purely because he’s not rapping enough and for those that buy his albums to hear his emceeing rather than his production, you’ll likely feel underwhelmed. When he is busting out those multi-assonant bars with internal rhyme schemes coming out of their ears, he’s one of the best out there, point blank period. But if you felt Roc’s previous albums were too Roc-heavy, this is the ideal album to ease you in to his brand of excess rap. Yet for somebody that held his previous two albums in such high regard, it’s a little bit disjointed, unpolished and dare I say it, scruffy.