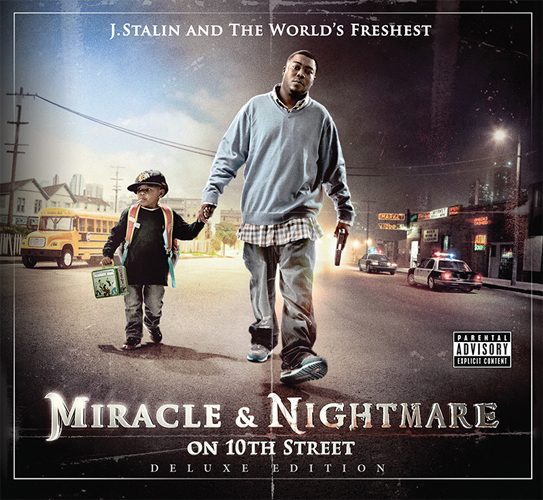 Ambition is one of rap’s cardinal virtues. Show a little ambition in and with your raps and you automatically get taken more seriously. We’re not talking commercial ambition, which comes extremely cheap in rap, but artistic ambition. Rappers with commercial ambitions tend to get taken more seriously as well, still these are two different things. Everybody can dream big, but to aspire to actual greatness takes a modicum of taste, talent, and persistance.

Of course, like pop, rap has known many showmen who have mastered the grand but essentially empty gesture. One of this year’s big albums, Jay-Z’s “Magna Carta… Holy Grail” is a prime example of rap rendering the act of aiming high a still image – iconic but not particularly instructive. Good rap is usually both. Evidently when dealing with a more complex character like Jay-Z there are different layers of artistic ambition and respective success and failure to discuss. The majority of MC’s aim lower.

That’s not to say that J. Stalin aims low with his double feature “Miracle & Nightmare on 10th Street.” But going by the title it’s a simple concept, two albums, one showing the sunny, the other the seamy side of the rapper’s stomping ground (Cypress Village, West Oakland), quite impressively represented by the composite album cover by an uncredited artist (the releases are also available individually but with different artwork altogether). Judging this book by its cover, you’d expect J. to discuss the duality of what ‘taking care of one’s family’ can mean in an impoverished neighborhood – hustling in the streets at night and taking your kid to school in the morning. That’s not what you will hear on “10th Street.” What you are sure to witness are boasts of sexual conquests and recollections of the dope game.

If that sounds like standard street rap, it mostly is, but there are a couple of twists in the mix. While eastwards from Atlanta to Chicago mic slingers of J. Stalin’s ilk typically take a heavy and dark approach, “10th Street” features a melodically often exuberant rapper over airy, soul-tinged beats. This should come as no surprise to those familiar with the involved parties. The album’s leading producer, DJ Fresh AKA The World’s Freshest, has long been known for beats either directly based on ’80s R&B or evoking that synthetic sizzle that emanates from S.O.S. Band and Keith Sweat records. In fact their working relationship goes back as far as 2006 when they teamed up for Stalin’s street debut “The Real World: West Oakland.”

“Nightmare” (disc 2) deviates from the path that “Miracle” (disc 1) pursues with select throwbacks to particular eras in Bay Area rap (“The New Me,” “Verses Gone Up,” “I Can’t Believe,” “Warning”), but overall the sound is very consistent and subverts dated expectations of West Coast rap. Some tracks (“Jimmy the Gent,” “In the Rain,” “Heavy Conscious”) even bring back memories of that brief period in mid-’90s New York rap when members of The Firm would lounge on especially lush beats.

The main problem is, as so often, the sheer length of it. J. Stalin is the kind of rapper that needs to concentrate and focus as it is, and he does the opposite here. Tracks like “Everglades” or “Take My Hand” are excercises in stream-of-consciousness raps from a mind whose consciousness doesn’t reach particularly far. But wait – doesn’t he have a “Heavy Conscious”? No – he means ‘Heavy Conscience’ and needs to check with Talib Kweli who mixes up the two on purpose. If I come across cheeky here, it could have something to do with J. Stalin’s own impertinence of disseminating his love life in detail. I really don’t need to hear a rapper talking about whipping out his dick (in these exact words) and stuff.

I also don’t particularly take to Jovan Smith’s stage name (Joseph Stalin being one of history’s most infamous mass murderers), but that comes with the turf and J.’s stylin’ on the mic takes the edge off the bad pun. The high-pitched sing-song recalls Philadelphia’s Freeway but is also trademark Bay Area, who has long embraced that nonchalant, borderline negligent delivery. It gets an upgrade whenever emotions are involved. “Pretty Face” has the song concept to match (but not the title…), he hoping for a happily-everafter (“I just wanna exchange vows on a big boat / We’re compatible if I listen to my horoscope”) while she’s not even looking for a relationship. “The Weekend,” describing a weekend affair, manages to be heartfelt despite loads of explicit language. Similarly, “4 O’Clock” actually does have the feel of dropping in on a guy who’s as high as he is horny:

“It’s 4 in the morning, I’m blowin’ strange clouds
She playin’ games, I’m tryina knock it out like Pacquiao
She say if I ain’t sober she ain’t comin’ over
I tell her hold up, grab the purple and roll up
I barely know her but I’m talkin’ like we been met
A lil’ phone sex, to get the panties wet
They say if you ain’t married, then it’s a sin
But if I don’t fuck her, tomorrow I’ma try it again
It’s almost 6 and I’m on the phone with a different bitch
The sun finna come up and I ain’t been asleep
I done fucked off my whole night smokin’ hella weed
If she’s a hoodrat then I dump my ashes in her weave”

J. Stalin can get laughs, drops relatable references and is able to term things. But his hit-miss ratio never rises above average. His failures are always close to his successes, the repetitive “The Money Blower” next to “Whip It” with its rugged scratching over spheric synths, complete filler like the Al B. Sure!-jacking “Naturally Mine” next to the musically much more ambitious “Just What You Want.” Likewise he’s strugglin’ one moment and stunnin’ the next, either on the same track or in short succession, there’s no transition (with the notable exception of “Verses Gone Up”), no phase of passage that would go a long way in making his accounts more reasonable and realistic. He begins “Nightmare on 10th St.” with gritty descriptions like “I’m just a nigga makin’ up for hard times / I used to sell crack to my nigga’ moms / Cold game – he prolly was sellin’ to mine”), only to jump way ahead with the following free-spending “The Money Blower.” Or he mixes modern terminology with memories on “Tim McGraw” (he “got that Faith Hill,” i.e. white girl). Not to mention songs misplaced on either side or leftovers from earlier releases like “Corner Sto Part 2.”

If cut down to one disc, “10th Street” would be a very solid release. The Freddie Gibbs feature “In the Rain” would certainly make the cut, as would the unusually organically orchestrated “Bomb” – next to some of the more serious offerings like “Look Where I Done Came From” and “Nightmare on 10th St.” and of course a bowl full of the duo’s undeniably fresh collaborations such as “P.O.L.O. (Players Only Live Once)” and “Just What You Want.” Sifting through 30 tracks, however, you’ll most certainly be editing “Miracle & Nightmare on 10th Street” yourself, whether before or after the purchase.