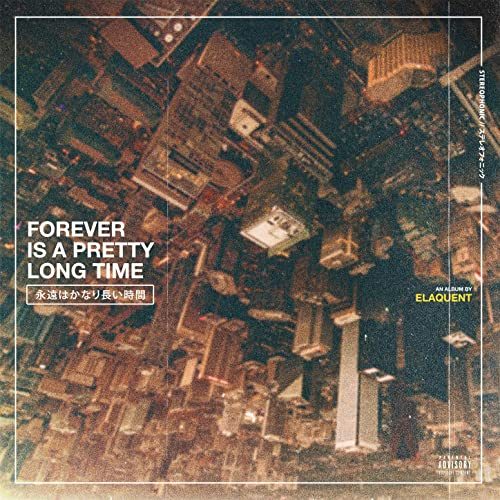 Forever Is a Pretty Long Time

If you’re a newcomer to Elaquent with this review, the first thing to know is that he’s the producer and other people fill the vocal roles. “Forever is a Pretty Long Time” could thus be considered a compilation album, but compilations are often haphazardly thrown together with little regard for musical cohesion or a theme. That’s not who Elaquent is though. He’s a skillful, polished producer with many years of dues paid and tracks made. There’s no chance of him just taking random tracks off the pile and throwing them together for release, let alone releasing such an album through Mello Music Group. Neither one could live with such an effort. There are rules to this shit and “Guidelines” to follow.

It’s only fitting then that Oddisee is the first guest star on Elaquent’s album. He’s even more of a perfectionist than E if such is possible and couldn’t be forced to half-ass anything he does even at gunpoint. “Accept defeat as a cost and not a loss” isn’t just wordplay, it’s healthy life advice from a very thoughtful emcee. “Very thoughtful” also describes the instrumental, which builds up beautiful layers and then strips them away to illuminate the second Oddisee verse, bringing them back part way through his bars for you to appreciate both that much more. It’s a delicate juggling act that would leave a lot of lesser chefs with egg on their face, but Elaquent is Gordon Ramsey minus the temper tantrums on these tracks.

When E flies solo on tracks like “Social Experiment” it allows you to take an even closer look at his technique and give it props. In my head I can picture him doing a livestream as he makes the track, punching loops in and out, adjusting things by increments down to a millisecond, making sure every element is right on time at the right volume and tempo. You feel the art in the music, which makes it even more of a joy when a rapper like Guilty Simpson joins in on “Thread Count.” Simpson puts feeling into every syllable he speaks, punctuating his bad-ass persona over a beat that makes him (pardon the pun) that much more eloquent.

While it brings a smile to my ears to hear these familiar voices on “Forever is a Pretty Long Time,” the lesser knowns are a much bigger revelation over the Elaquent production. I don’t know Saturn Alexander on “Annoyed” but she has some hot fire lyrics, and no matter how angry she is it’s impossible to not stay mellow over Elaquent’s dead-on imitation of a J Dilla beat. When Brainorchestra says “Other than money, I get paid a lot of respect” on “Lottery Check” I instantly appreciate his cleverness and gruff NYC style swagger. When I checked the stats on “Chase the Light” I was stunned to see it had seven thumbs down. Really? Cavalier is anything but about his raps, and I found the fact that crickets were chirping on the instrumental utterly engrossing. The song has the feel of a lovely warm summer evening.

By the time E wraps up the proceedings on the aptly titled “Vices” and you realize the show is coming to an end, 38 minutes have flown by and left you wanting more. The ultra slowed down Q-Tip vocal sample may not resonate with a generation raised on rappers from the 21st century, but for an old school Tribe head like me all I could think was “street poetry is my every day/but yo I gotta stop when you trot my way/if I was working at the club you would not pay/aiyyo my man Phife Diggie got somethin to say.” RIP Phife. It’s a fitting reference though because Dilla built off the Native Tongues sound, Elaquent built off his predecessors like Pete Rock and Dilla, and future producers will build off E. This is legacy music.