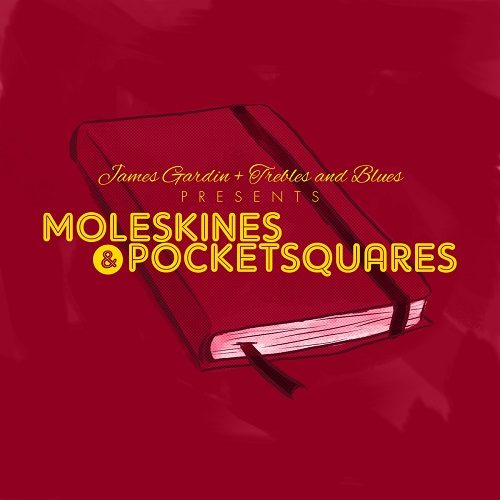 James Gardin, formerly known as P.H.I.L.T.H.Y., has been one of the best emcees to build a buzz in the Michigan hip hop scene over the past few years. Hailing from Lansing, Gardin is one of the most talented members of the BLAT! Pack (a group that is home to rappers such as Jahshua Smith and Ugly Heroes’ Red Pill). Over his past few releases, including the excellent 2012 EP “A Little Light For You”, Gardin has built a rapport for crafting uplifting and enlightening songs.

On his first solo release since his name change, Gardin teams up with LA producer Trebles and Blues for a 5-track EP, titled “Moleskines and Pocket Squares.” The EP is brief, with three of the songs clocking in less than three minutes, but it’s probably his best work.

While “Moleskines and Pocket Squares” still has Gardin’s positive outlook, it’s still his darkest project to date. Songs like “Better Days,” “I Cry” and “Selah” all deal with some sort of struggle and hard times. Gardin tells stories about despair on “I Cry,” which is one of Trebles and Blues’ best beats on the EP, features weepy blues guitar. “Selah” is the strongest track on the project, and is an excellent closer because it has a nice uplifting vibe.

“Moleskines” is only about 13 minutes long, and my only complaint about it is that it’s just too short. Most projects suffer from being 2-3 songs too long, but this EP is the rare project that would feel more complete if it were about 6 minutes longer. “Dinner for Two” is a nice, smooth joint, but ends at 1:31 – right when I start getting into the groove.

And that seems like an appropriate summation of “Moleskines and Pocket Squares” – there isn’t a weak moment on the project, but in the end you wish you had a little more. But with a full-length album in the works with producer KuroiOto, I’m sure James Gardin will have more excellent music on the way.