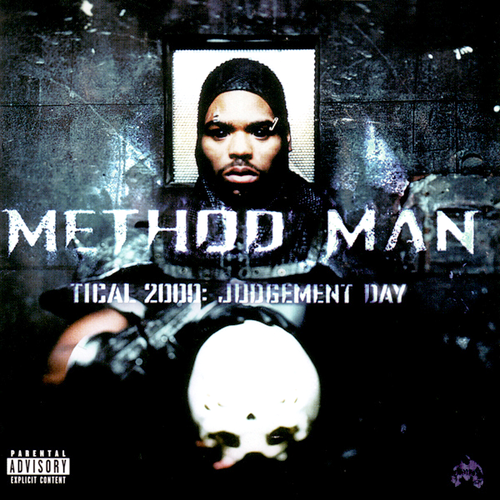 Mr. Meth sure know how to make a muhfucka wait, don’t he. It’s been almost a full YEAR since we were told “Judgment Day” would be gracing our record store bins, and the anticipation hasn’t done anything but grow.

And for that wait, we get an overlong, mediocre album. It’s kinda like waiting all year for prom day and you end up having to roll not in a limo like you expected, but a broke down brown Datsun B210.

The intro keys up a parody of “Dick Clark’s New Years Rockin Eve”, but of course, being this is “Judgment Day” some different shit happens when the ball drops. Executed nicely, but not too original. Fuckit, it’s just an intro, lets get to the songs.

After the blah first track, “Cradle Rock” drops on the eardrum, there’s a female voice runnin the hook with Meth, it sounds like one of the girls from Deadly Venomz or somethin. I check the cover and it’s LEFT EYE. Left Eye? Whafuck? But no matter. The beat is pretty hot, and Meth is vintage Meth. The only spoiler is when Left Eye rants for the last minute or so about nothin, really.

“Sweet Love” is next, with it’s choppy beat. I’m noddin my head, checkin the credits. Cappadonna’s on it. My face drops. There’s no fuckin way this track is gonna be fat if Godawful Cappa is flowin over it. Meth constantly calls himself the worst rapper in the Wu in print interviews, but if I may digress for a minute, he aint got shit on how fuckin ass-out, mealy mouth, completely and in all aspects fuckin TERRIBLE Cappadonna is. Okay, back to the review. Anyway, Meth and Streetlife, his protege almost save the track, but it falls to the same problem the rest of the album suffers: too much of not quite a good thing.

Streetlife, however, shows himself to be a hungry muthafucka to be watchin for in the future, as he damn near outshines Meth on “Suspect Chin Music” along with “Snuffed Out,” a 2 minute little solo joint that ends waaaay too quick, and basically every other track Meth lets him shine on.

“Spazzola,” one of the jewels on the album, features a looped piano riff (which never seems to fail in hip-hop) , a crazy beat, and bangin ass lyrics from the one and only rebel INS, who also happened to produce the track. This track along with being a classic Wu-banger, also had me geekin for that REALLY long awaited Inspectah Deck solo shot.

But the two joints that caught my neck snappin hard were the two Erick Sermon produced cuts, “Step By Step,” and “Big Dogs” It’s almost like Erick saves his sickest beats for Meth and Red, and Meth saves some of his best flows for those beats. I could reprint some lyrics, but you all know it’s not really WHAT Meth says, but HOW he spits that shit. When the 1998 version of Run DMC starts tearin shit out of the frame on “Big Dogs,” it’s almost enough to make you wonder out loud if Meth isn’t really in the wrong crew.

And then you have the obligatory radio cut, “Break Ups 2 Make Ups.” Basically a sequel to “All I Need,” from Tical, it has Meth goin off on the girls he spent time caring for and they tryin to fuck him over. Not a happy ending to “You’re all that I need I’ll be there for you, You keep it real with me I keep it real with you” You KNOW it’s destined for radio when you read that Trackmasters hooked up the beat, and Poke and Tone revisit the same guitar stylings they used on Nas’ “The Message” with the similar successful results: You know it’s trackmasters, but Dammit if they don’t get your ass to shakin. And if you gotta have some R&B singer drooling all over the chorus of the song, at least its D’Angelo (Where the FUCK is your album, D? Damn…all these artists makin us wait and shit…) All in all some fat shit.

But what’s keeping me from full on recommending this album is it’s filler. There’s too damn much of it, (Retro Godfather, Perfect World, Party Crasher, Play IV Keeps, Killin Fields, etc…) And there’s about 5 skits too many, the exception being a Chris Rock skit where he introduces Meth to a rabid crowd, but gets hung up runnin through his aka’s: “AKA, Iron lung. AKA Mr. Hankey, AKA Donnie Brasco, AKA Heatmiser, AKA Velvet Jones” Meth of course wants this stupid shit to stop, so he has his entourage shoot Rock, sic dogs on him, sic dolphins on him (DOLPHINS??) the list goes on.

But this interlude basically sums up the entire problem with the album. Meth is, for all intents and purposes, the “star” of the Wu Tang Clan. We WANT to see him shine ridiculous. But he’s more content to let others upstage him, like Chris Rock and StreetLife, Inspecktah Deck and others. Only on the few and far between solo joints and on the Def Squad collaborations, does he sound amped and ready to go for his shit. It’s pretty obvious he doesn’t like this “star” shit. He doesn’t like being singled out, really (read a few of his interviews) He belongs in a crew, dropping one ILL ass verse per song. I’m probably gonna catch shit for it, but I think Meth would be better off if he never made another Solo album again. Not that this one is bad, but his talents are better served when he’s playing off somebody else (preferably Redman) He’s had two chances now to prove otherwise, but I’d rather not see him get a third. I don’t wanna have to start sayin that Meth’s fallin off, and I’d probably have to if Tical 3 ever dropped.

But he COULD have had a classic Wu album right here if he’d chopped half the songs, and all the skits, and that’s basically it. It’s alright, but I wasn’t waiting a year for some “alright” shit.