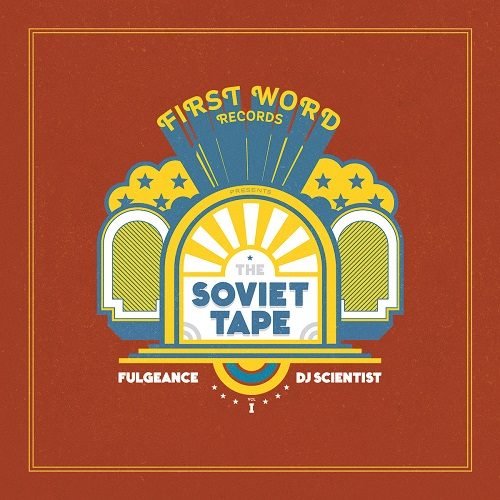 Eastern Europe has a vibrant Hip Hop culture, with thousands flocking each year to festivals like Kemp in Czech Republic, Splash in Germany and Fresh in Croatia. I’ve been to Kemp twice, and it’s an odd sensation seeing 99% of those in attendance donned in their Hip Hop garments – it was a bit artificial despite the heavy emphasis on being real. Standing up on a bus, travelling from Hradec Kralove train station to the airport hangars, surrounded by bald white boys in their late teens/early 20s while a ghetto blaster fills the articulated bus with Black Moon’s “I Got Ya Opin (Remix)” completely contradicts the stereotypical racist hooligans you might associate surly, bald, Eastern Europeans with.

DJ Scientist is known as having one of the biggest record collections in Germany, while Fulgeance is a versatile producer from France. Both have utilized Scientist’s extensive collection of Soviet Union-era records, which brings together instrumental Hip Hop and communism like never before. It’s a pleasant change from the usual European beat-wizards compiling their favorite New York rappers on to one album. Distant Starr appears on “You Know”, and Blu teams with Open Mike Eagle on “From Lithuania with Love” which I found underwhelming. It’s the instrumental tracks that prove more fruitful.

There’s evidence of the tense political situation surrounding Russia at the moment, whether it be song titles like “The Spy”, “Liberation March” and “Youth Brigade”, the title of the album itself, or the places that Scientist and Fulgeance take the listener through their music. The plodding piano of “Lost in Tyumen” is workmanlike and depressive, reflective of a society fearing the huge nation across the border that currently strikes fear into Ukraine, Lithuania et al. “Glorious Times” is more upbeat yet still has undertones of doom, as does “All Equal” – the latter sounding like the equivalent of a rain-sodden bus trip through Tbilisi. “The Spy” even uses an interview with somebody well-informed on Russian spy activity in the United States.

“The Soviet Tape” is an intriguing listen, especially if you have an interest in international politics. It evokes a mood that for the sake of this review, I’m going to attribute to what many must be feeling in a tiny nation that is effectively powerless to a Russian invasion. The source material is derived from Soviet Union vinyl from many years ago, but it also remains relevant given Russia’s recent political problems (Ukraine, the poisoning of Alexander Litvinenko, shooting of Boris Nemtsov, Friday’s Montenegro vs. Russia soccer match which was abandoned due to missiles being thrown at players).

For those with the mentality that a beat must have an emcee – this album may not change your opinion but it reminds us all that there is actually a hefty imbalance in Hip Hop when you consider the musical elements of this culture. Nobody checks for a DJ these days – it’s all about the producers. It’s easy to forget that DJs were producers and guys who could cut and scratch. With DJ Scientist and producer Fulgeance coming together, we’re treated to an instrumental album that proves Hip Hop can still be rewarding without rap, and it’s difficult to imagine an artist spitting bars on “Imperialist Monsters”, because it’s so enjoyable without lyrics that it would suffer if it did.

It may be easy to ignore the former Soviet Union countries like Lithuania geographically, but “The Soviet Tape” is worthy of some attention for having the balls to share music influenced from a period of time many Hip Hop fans in Europe will want to forget.