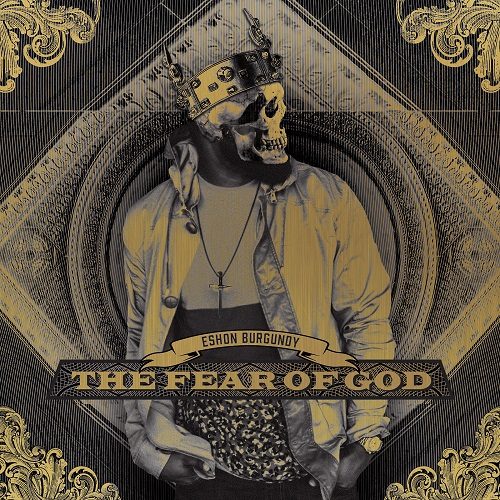 Still with us? Good. Eshon Burgundy is one of those emcees who is blurring the lines between Bible thumping and hip-hop music. Building on Lecrae and Sho Baraka’s strong work, “The Fear of God” is full of surprisingly strong production and rhymes that don’t batter the listener with Old Testament until they admit that celebrating Christmas is the only time they consider themselves Christians.

Having heard countless tales of violence and sex throughout my years listening to hip-hop, I’m almost numb to rhymes from people raised through crime and poverty. Numb to the opposite end of the financial spectrum also; champagne-wasting parties and rap stars owning cars Jeremy Clarkson wishes he could drive daily. Both backgrounds are fascinating to average listeners, but are certainly well-tread paths that have become a part of hip-hop whether we like it or not. Rags to riches, rags to further rags, riches to rags (surprisingly rare) and of course, riches to further riches.

Hip-hop has always had characters who embrace competition and use anything they can to prove their superiority. Rhymes, jewelry, bitches, cars, bullets taken, album sales (or first week numbers) and the current favorite – # of streams. It’s difficult to use religion to garner an advantage over other emcees, because the very notion of downplaying others through God or spiritual mindedness doesn’t compute when most people couldn’t give a toss how Christian you are. It can be done – Killah Priest is an example of this but he has always been an underground artist who combines biblical references with street narrative. I wasn’t too keen on Lecrae’s “Anomaly” last year, but this new album from Eshon Burgundy is the perfect example of how to make a hip-hop album with Christian values that sounds accessible AND street.

The song that caught my attention before approaching this album was the single “Higher Learning”, which benefits from a fist-pumping production you could imagine Lil Wayne getting ign’ant over. There’s even a sly dig at Wayne with the line “one day you made it rain, on a shorty huh? But he made it rain for forty days like a bottle of OE”. Production is remarkably consistent throughout the album, thumping hard as it can on “Respect, Power and $” with beat drops becoming a key part of the instrumental. “Bloody Money” highlights the conflict between Eshon’s two passions – his faith and his music.

It’s not hard to imagine church-goers turning their noses up at rappers (regardless of what they are rapping about) – it’s the same reaction many hip-hop fans have towards Christian rappers. At times, “The Fear of God” sounds like a J. Cole album, particularly the song “Good Grief”. It’s one of the more sombre efforts, quickly overthrown by the Braille collaboration “Retro Sonday”. Using the term “retro” as a term for bringing back Jesus Christ is a novel idea, but it’s unlikely to take off. This album is also unlikely to take off and soar to Lecrae numbers, which is disappointing because it feels like the better album.

Nothing beats reading through liner notes whilst listening to the latest rap purchase, discovering who produced which track and whether the artist listens to and chose to thank your favorite emcee. It’s the “thanks” section that always struck me (despite being born Christian myself) – every dude praises God or Allah first and foremost. Even the most hardcore of emcees would give thanks to God, before spending an hour committing every sin imaginable in audio form.

This album reflects the adulation, thankfulness and respect for God that the hundreds of rap albums have hinted at in the liner notes, and it is time more people chose to fear God rather than Christian hip-hop, especially when it’s executed this well.