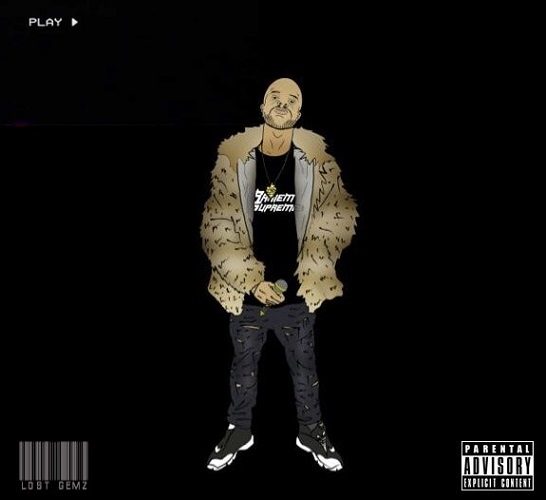 In the DMV area (D.C., Maryland, Virginia), the most prominent musical output, albeit mostly localized to D.C. and some of its adjacent Maryland suburbs, has been go-go music. It also goes without saying that Chuck Brown, even before his death, is a musical deity as far as this sub-genre of funk music is concerned. Several up and coming DMV hip-hop artists have incorporated aspects of go-go into their music as both a form of influence and showcasing tribute to it. Typically, what I hear from hip-hop artists from right below the Mason-Dixon line is mostly trap productions heavy on bass, synths and 808’s. D.C. rapper Rahiem Supreme, though not without some flaws, stands out because his rapping style and featured productions on “Lost Gemz” demonstrate an influence that extends farther beyond the confines of the DMV.

By his own admission, this fourth album is “mad jazzy with boom bap”. Moreover, he also cites several luminary New York rappers as his influences. And the fact that the album’s intro (produced by Brooklyn beatsmith SoWhatAboutRah) samples interview dialogue from the Notorious B.I.G. shines an even brighter light on his inspirations. I hear flashes of Big L and Ghostface Killah in his flow and rhymes, but Rahiem’s style is nonetheless his own.

His topics for “Lost Gemz” include rapping about his skills, storytelling, and topical tracks for social commentary and introspection. Speaking of which, the Dopplegangaz-produced “Reflection” has the kind of recounting of experience worthy of introspection. Over an alternating, but heavy, drum snare and an acoustic chord, Rahiem pours his soul on the track. “Chase Money” satisfies the trap crowd with hard beat and a switch-up in his flow to keep up with the frantic 808s comprising the beat. The theme continues on the next track, “Bossed Up”, only he adopts a more syrupy flow there. If there’s a weak track on here, I’d have to go with “BringItBack 2012”. For this listener, the beat feels subdued and has loosely combined elements of trap and sampling. Also, it doesn’t have the same intensity with which Rahiem spits over it.

The album’s closer, “The Kingpin Story”, is a first-person narrative about a man’s rise and fall in the drug business. While it plays out with a cinematic feel, it doesn’t add anything new to this kind of story, there’s no clever twist anywhere in it to make the listener feel fully engaged. The one song on here that gets the award for ‘best on the album’ is “JL2M”. Produced by Boominear and Manny Mozart, it starts off with a beat built off of a sampled piano loop. It then switches up to a different beat after over a minute in. I have to say, Rahiem certainly goes in lyrically:

So far, local independent DMV artists like Rahiem and the Slumlords are among the ones with standout production and clearly not influenced by the area’s dominating sound. Though Rahiem has his inspirations, reconciling those with his surroundings will make his sound only stronger.