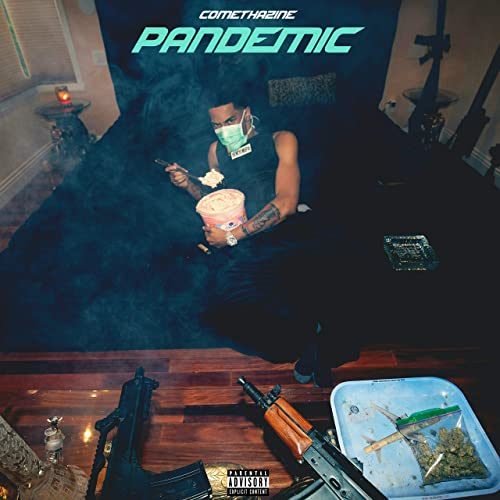 Having first experienced Comethazine with “Bawskee 3.5” in 2019, I thought I was well prepared to check him out again in 2020. The title “Pandemic” gave me a moment of pause though. How quickly did Comethazine record this album to wind up with something that topical right now? Or did Meth simply have a bunch of tracks sitting around at his disposal ready to go, slap a title on the collection, and put it out via Alamo Records? Either way I’m not sure I’d call an album “Pandemic” unless you were absolutely sure you wanted it to be a snapshot of a specific year and time in all of our lives.

I have to think this album is more the “tracks that were ready to go” variety than some fresh material. Despite the title “Pandemic” has the same kind of raps that “Bawskee 3.5” did with little to differentiate between the two. Even the length is nearly identical — the last was 12 tracks and 22:16 long, this one is 12 tracks and 20:10 long. Same number of “songs” as such yet somehow it’s actually shorter. That was one of my chief complains about the last Comethazine release. Meth has a decent flow and is energetic enough, but with songs and albums this short, you barely have time to get invested in his style or flow before it’s already over.

The other thing that is apparent to me this time is that Meth talks a lot about doing things or having things done to him. “Nutted and changed my whole vision about it” — would you guess the name of the song is “Nutted”? You guessed correctly. “Air Jordans and I bet you if I jump I glide.” Song name? “Glide”. “Bought a new pitbull it stand about knee tall/teach him to bite so he grow up a mean dog.” Yup — the song’s called “Pitbull.” Maybe that’s unavoidable when you only have one cut longer than two minutes, but the predictability of the style is a little bit boring. It starts to feel like you can write a Comethazine rap after long enough. “I’m a baller so I gotta go ball/went and spend a couple bands at the mall/met a bad bitch told her give me a call.” Call the song “Mall” and there you go — ANOTHER ONE.

I might be clowning a little but the point isn’t any less pertinent. It’s disappointing because I thought Meth had some future potential on “Bawskee 3.5” and that seems for the moment to have been squandered. On the plus side he flows very cleanly at any tempo on any beat. There’s no tripping over his words, trying to overextend his reach by inventing new words or using ones straight out of a dictionary, nor excessive posturing that seems unnecessary to show us how real he is. These things make me want to like Comethazine, but “Pandemic” feels phoned in. It’s not just that it’s short or that his format is repetitive — it’s that the beats feel like trap cliches without any style or substance. They’re serviceable but not original or interesting in a way that demands replay. If he had made an album as topical as its title it would have been an interesting challenge he could rise to, but instead “Pandemic” makes a promise Comethazine can’t deliver on.