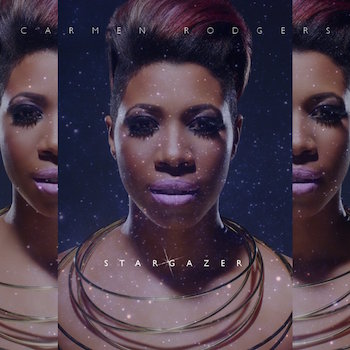 Unless you’re up on your R&B, Carmen Rodgers is a name that hasn’t quite crossed over to achieve brief chart success like Chrisette Michele or Teedra Moses have. Having enjoyed the latest Faith Evans album “Incomparable”, I thought I’d check out what else has dropped in 2015 and while Jazmine Sullivan’s “Reality Show” is an obvious choice, I wanted to give Carmen some coverage. Not only is “Stargazer” better than the latest Jazmine Sullivan record, but it’s very much in the vein of Hip-Hop Soul and a pleasantly surprising listen. Carmen has been active for over ten years, and has been spending a lot of time with The Foreign Exchange, a group known for their soulful approach to Hip-Hop. The influence of Nicolay, Phonte and Zo! Is evident, and it shows that a collaborative record with them could be something special.

The lack of rappers ensures “Stargazer” isn’t straying in to crossover territory, but that’s not to say there aren’t some surprises. The scratching on “Heartless” isn’t exactly DJ Q-Bert level, but does lift the album at precisely the right point (the middle). The use of a 14-piece string section (most notable on “Love Stories”) adds depth that many records of this ilk continue to lack. Yet, the album is defined by its energetic first half, and sleepier second. Naturally, this makes more sense than vice versa, and enhances the late-night atmosphere holding everything together.

Themes are largely what you’d expect: love, heartbreak and a distinct lack of astronomy. Traditional R&B is emphasised the further you delve in to the album, most notably on “Patience”, a song all about holding back on temptation, while “Tell Your Story” is a thumping yet softly delivered track all about making men force Carmen to decide on their future by opening up. The latter is musically the twisted sister of Moka Only and LMNO’s “Love and Happiness”, which is an obscure reference but definitely a good one.

Before Carmen gets too depressed, Anthony David tears down the door on “Charge” for a duet that has a noticeably different sound. Carmen sounds more nasal; but it’s the irritating bridge that I found hard to ignore on what is otherwise a clean, clouting collaboration. It could just be the louder volume of the vocals though, but a minor criticism nonetheless.

“Stargazer” is apt, as not only is this perfect music for playing late at night as you embrace the warmth and solace of a sky full of stars, but Carmen shows that she truly is a star herself. It’s difficult to say this without sounding critical, but “Stargazer” starts as a charged, swagger-driven journey reminiscent of Mary J. Blige in full strut, and gradually eases out in to an elegant stroll. In the era of cherry-picked songs and online playlists, this is essential for those late-night listening sessions – stars or not.