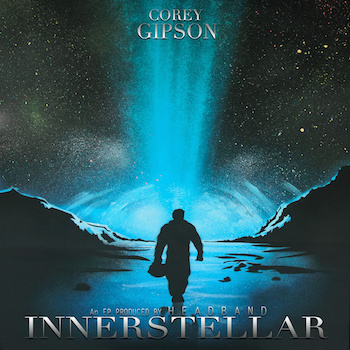 In my last review, I criticized how any album these days that’s less than ten minutes long and comprised of a maximum of five tracks somehow constitutes an EP. I then mentioned how an EP’s minimum should be six tracks. On this particular review, I got my wish. South Carolina emcee Corey Gipson teams up with L.A.-based producer Headband for “Innerstellar”. Inspired by the 2014 Christopher Nolan film, this six-track EP is intended as a concept album, making heavy use of the themes and sampled dialogue from the film.

To clarify, this is a concept album, not the kind in which a story or narrative is told all the way through. What’s interesting about concept albums is how, no matter the genre, you get to behold an artist’s ability to transport ideas into their medium and then give a unique aural translation of them. Danger Doom did it with 2005’s “The Mouse & The Mask”, which was about and inspired by the Cartoon Network’s Adult Swim programs. 1976’s “Albedo 0.39” by Vangelis borrowed its themes from astrophysics. Being a fan of the film is what drew me to give this EP a listen. I hadn’t heard of Corey Gipson prior to this review. However, after listening and considering the EP’s inspiration, I expected more in terms of quality.

First off, the beats are clunky, lo-fi and off-beat, as is Gipson’s flow. His whole style consists of shouts and the kind of stream-of-consciousness excerpts that one would expect to find in the diary (or online blog, I suppose) of a stereotypical emo kid. The EP utilizes the movie on an almost purely superficial level. From the cover, to the song titles and finally to the sampled dialogue. Each track has dialogue from the film spliced into them, which would be fine if it actually tied in to the lyrics with more depth. The first track, “Space”, has a horn sample looped as well as repetitious dialogue. “Wormholes” has some depth in that the title is symbol for shortcuts and the compulsion to chase after them for their purported easier route.

The most interesting part of the film was the idea of humans evolving to the point where they can exist in five-dimensional space as well as perceive and manipulate time as a three-dimensional construct. On “5th Dimension”, Gipson spits ‘don’t be scared ’cause you don’t understand’. I’m not scared, I’m just bothered that his interpretation of that particular concept involved no expansion on it and seemed more inspired by “The Twilight Zone” series. “Relativity”, “Time” and “Gravity” are each reinterpreted on an introspective degree, but fall short. The latter track contains dialogue at its end that would’ve been more appropriate in that of “5th Dimension”.

When I got my wish about EP lengths, I should’ve also thrown in a caveat about meeting quality standards. The production could’ve better as could the lyrical themes. They say that beggars can’t be choosers, and that may be. But then again, that’s why wishful thinking was invented.