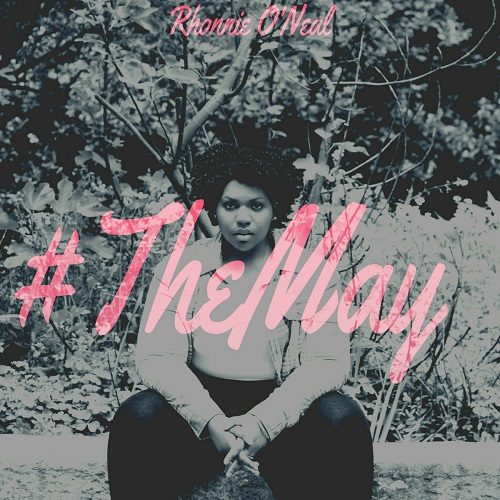 Rhonnie O’Neal :: The May

A couple of weeks later and she would have had to call this EP “The June.”

I keed. It’s late at night, it has been a long Memorial Day weekend (much respect to all the men and women of our armed forces who have made the ultimate sacrifice – we remember you all year and not just for one day) and this release hit my inbox literally at the last minute of the last hour. I decided to just go ahead and hit play and do a quick review on it myself instead of trying to figure out who on staff would be interested in it.

Two-thirds of the way in I realized someone had made a fundamental mistake – either me for accepting it for a review or the publicist for sending it to me for review. Rhonnie O’Neal certainly didn’t do anything wrong though. She’s a very capable singer. Let me emphasize the SINGER part for a second here. This is not one of those cases of a rapper who gets an autotuned voice modulated croon on and flows over some beats in an off-key manner. This is not a hip-hop artist who switches back and forth between rapping their bars and singing them, as so many do these days. O’Neal (maybe I was fooled by her name’s similarity to Shaquille) is none of these things. She’s a classic R&B SONGSTRESS.

As I had already made my bed and turned down the sheets, I decided to go ahead and lay in it and see what Rhonnie had to offer. “Crazy” shows that she’s a fan of slow, electronically low soundscapes, which give her the breadth and width to soar vocally and virtually invent the entire structure and melody of the track on her own. Only the finger snaps provided by CMPLX provide context.

Xavier Jordan’s backdrop on “Hold Me” is more like what you’d traditionally hear on an urban radio mix, although perhaps it’s a little better suited to the late night quiet storm. Her breathy vocals yearn for a partner to be with her: “I’d give my heart, to touch your soul.” She’s apologetic, she’s begging, she’s full of desperation and despair, but it wouldn’t be much of a song without it. She has to minute the emotional depths of the few words per bar that are there.

The album closes with “Home Free” and it’s Quality Kidd’s echoing drums that finally challenge O’Neal to break out of the cliches of R&B music and go for a greater gusto. The track sucks me in more than her vocals, but she’s double layered and overdubbed where necessary to create an interesting sound. It’s studio trickery at its finest but it’s also effective. On the whole though O’Neal fails to capture the imagination the way great R&B singers have for me over the years. She doesn’t have the sultry husk of a Mary J. Blige, the soaring range of a Mariah Carey, the unapologetic feminism of Janet Jackson, the sass of Ciara, or the chutzpah of Ndegeocello. What I can say for O’Neal is that she’s unoffensive and well-produced – but this is not a star-making EP.