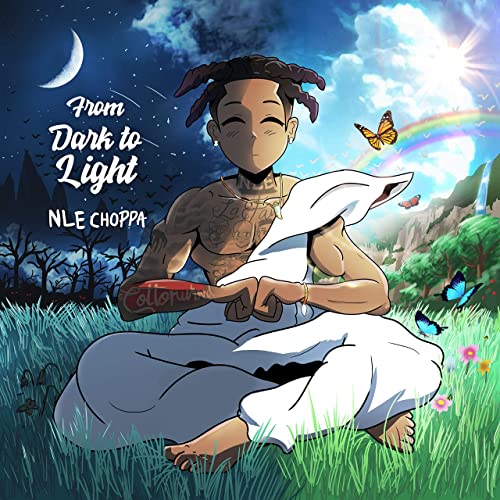 From Dark to Light

NLE Choppa :: From Dark to Light

After a few cameos that caught my attention throughout 2020, I started taking a closer look at Bryson Lashun Potts, better known as NLE Choppa and formerly known as YNR Choppa. If you were already familiar with Choppa before 2020 that’s likely due to his successful series of “Shotta Flow” videos, the first entry of which has done over 150 million views as of the writing of this review.

His latest release “From Dark to Light” is described as a mixtape as opposed to a studio album. While the distinction between the two has become ever more blurry in recent times, one song struck me as a reason to classify it that way — “Picture Me Grapin’.” It makes absolutely no apology for the fact it uses the same instrumental as 2Pac’s “Picture Me Rollin'” from “All Eyez On Me” (originally Johnny J’s “Better Off”) but pitched up slightly. In fact it can be viewed as a tribute of sorts as Choppa references Shakur’s phrases while reworking them as his own: “I live the life of a boss player until the day I die/Couple bitches that’s feelin on me, they sayin that I’m fly.”

What stands out about it being a tribute is that Choppa is only 18 years old, meaning he was born over six years after Shakur died. It also seems like Choppa instinctively knows he came up in a cutthroat, violent world in Memphis, Tennessee but believes his rap is a ticket to a better life rather than an excuse to glorify his negative experiences. On “Moonlight” featuring Big Sean he’s glowing in the night just as much as his Detroit guest star, an impressive feat given how much longer Sean’s been in the game.

“I changed my ways, my future brighter
It was scary, Michael Myers
Feel entitled ’cause I want the title
Take it from my rival
Who feelin my sorrow?
Pain in a bottle with desire, ho
Look up to Ralo, I wanna own the hood I put on
Put on like cologne, I wanna show you you don’t need a loan”

Even though I accept the “mixtape” definition if that’s what Mr. Potts wants, you can hear the obligatory producer drops like “Pipe that shit up TNT” on tracks like “Hear Me” featuring INK, letting you know these are brand new original tracks and not just instrumental jacks. (Oh and if you don’t know that drop yet it’s for TnTXD.) Even though I’m slowly being made a convert to young Choppa through his lyricism and charisma, some tracks like this one in particular are more noteworthy for their production. Choppa does at times get bogged down in doing the pitch tuned rap flow, even though he’s clearly got the talent to spit straight bars without resorting to gimmickry.

The exact same producer drop hits at the start of “Bryson,” the lead single for this albumixtape, and on this one most of the singing is confined to the earworm hook “Bryson, Bryson, everybody loves Bryson.” Even with a bit of a tuning here and there his lyrics come through loud and clear, including an unexpected bit of veganism.

“Ay, I never thought I’d say this
but I’m eatin on a vegan plate
Don’t take me to Chick-Fil-A
I’m eatin at the Grand Cafe
They ain’t open on Sunday anyway
Fuck your dinner date
You are what you eat
I’m countin green, eatin celery”

“Bryson” even offers a message of hope to Choppa’s young fans when he encourages them to believe in the karma of doing good deeds. “Put the good in, you get the good out/I don’t even tote my gun no more, cause I’m knowin that I’m good now.” It may become a bit repetitive to say that NLE Choppa is unexpected, but then again it shouldn’t be so shocking to hear ANYBODY this young in the rap game who is thinking long range about his future and that of his peers. Even when he has to unload clips on “Man Down” it’s tinged with regret that jealousy and envy forced him into a corner. “I know they hate it, they see I made it, I put it in they faces/Segregated from all the hatred, I’m protecting my space.”

The most important thing I can say in conclusion about “From Dark to Light” is that at only 40 minutes long, it leaves me wanting more. Most rappers who pitch tune incessantly leave me wanting a lot less, but when Choppa and his producers do it, they seem to strike a balance between adding a little musicality to his flow without obscuring what he has to say. That latter part is crucial. Choppa HAS something to say. It makes him a rare gem for someone his age, and I hope that unusual maturity doesn’t get lost on the way to certain fame and fortune. He’s got a chance to make a difference in this world for the better, and hopefully even though we’re in the midst of a pandemic right now that Grand Cafe is still open. I’m not vegan myself but I’m always open to new experiences, and NLE Choppa turned out to be a very pleasant one.