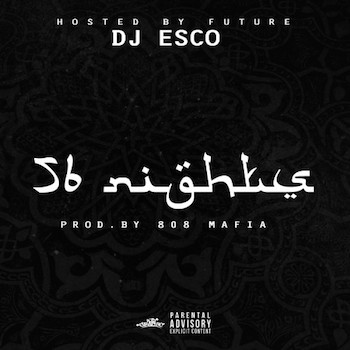 Over the last six or seven months, Future has been one of the most prolific acts in hip-hop. The Atlanta rapper has churned out three mixtapes since October 2014, and they’ve all been very solid. His latest, “56 Nights,” is his most lean and concise tape yet.

Like “Beast Mode,” which he dropped in January, “56 Nights” is short and sweet. He sticks to his tried-and-true formula: a drugged-out, autotuned sing-song delivery over dark, atmospheric club production. It is hosted by DJ Esco, who spent 56 days in jail for marijuana possession, which spawned the title for the release.

There aren’t any moments on “56 Nights” that will change your views on his rapping capabilities. Future tends to save those moments for his LPs (see: “Benz Friends” and “Move That Dope” off his last retail record). His verses have a very stream-of-conscious delivery to them. He often sacrifices memorable one-liners and advanced rhyme schemes for melody and cadences.

While his rapping on “56 Nights” won’t blow anyone away, Future further cements himself as one of hip-hop’s premier hook guys. His hook-writing is seemingly effortless, and often effective. Tracks like “March Madness” and the title-track have instant, attention-grabbing hooks. And songs such “Trap N****as” and “Purple Coming In” are so catchy, they sound like 3-minute long hooks.

The production on the tape is primarily handled by Southside, with Tarentino and Sonnydigital also notching credits. The production is effective if not a little predictable. “56 Nights'” brevity bails out the occasionally monotonous production. There are some winners on the tape, though. The aforementioned title track and “March Madness” are definitely bangers. While “No Compandre” has a repetitive but excellent synth-line that sounds better with each listen.

Over the past few years, Future’s hype has sort of waned since his “Tony Montana” and “Same Damn Time” days. A lot of that can be attributed to his sound being very unique when he first dropped. Now hip-hop has spawned several acts who’ve borrowed Future’s style. Rappers such a P Reign, PartyNextDoor, and even Drake at times, owe their successes to Future. Even though his hype has dimmed slightly, Future has proved that he is here for the long-run with these three post-“Honest” tapes.