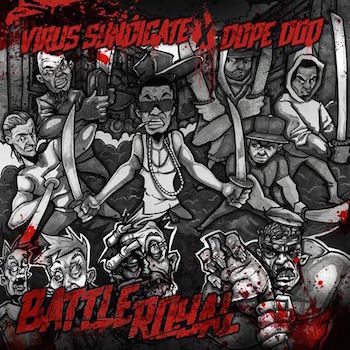 It’s healthy to push your musical boundaries every now and then by trying something unconventional. Virus Syndicate x Dope D.O.D.’s “Battle Royal” definitely fits that bill. On only the most cursory of inspection based on the album’s title and cover, you might mistakenly believe it was a martial arts, Wu-Tang-esque inspired hip-hop spinoff – and we’ve certainly had no shortage of those in rap music over the last 20+ years. Nothing could be further from the truth though. In fact I’m going to have to apologetically borrow from the press release to accurately describe what the heck is going on here – because it’s not any kind of hip-hop you’re likely to have heard before.

” A combination of hip hop styles, the Battle Royal EP is a collaboration between two fully functional European hip hop/grime crews. In one corner, we have the UK’s Virus Syndicate, a group of rappers who frequently cross over into the domain of heavy bass. In the other corner, we have well-known Dutch trio Dope D.O.D., who went gold in both Italy and Poland with the release of their ‘Ugly’ EP.”

Now that we’ve established what this supergroup mash-up is, we need to further establish what the press release means by “the domain of heavy bass.” You might picture the subwoofers in your home or car stereo rattling, and there’s no doubt they would if you cranked “Battle Royal” to the maximum, but in this case “heavy bass” is more akin to “dubstep” or “grime.” Songs like their five minute opus “Killing ‘Em” are more like Skrillex’ “Bangarang” than what you traditionally think of as a rap track.

This is undoubtedly going to be a tough sell for a lot of my peers, raised in the days of that old boom bap rap, where you expect a layered instrumental with classic samples over banging drums and a solid bass thump (often with a DJ scratching throughout or showing off his turntablist tricks in the outro). That’s going to be a cause for pause with some of the audience – and the European accents may be for others – though they are not the thick Brixton/Jamaican/patois that causes many poor Yanks to cock an ear and try to hear it more clear(ly). That’s not to say they don’t access the accent, but the beats are not drowning out the words, and the diversity of the verbalists featured makes it easy to follow the verbiage. “We hard to wipe out just like the roaches/You didn’t want to start, then you shouldn’t have approached us.”

There’s only one major drawback that I can give you to “Battle Royal” as an open-minded listener – it’s only 17 minutes long. This is obviously a teaser to see if Dope D.O.D. and Virus Syndicate was a good idea for a collaboration – and though it’s one of the stranger things I’ve listened to lately it’s not a BAD idea by any stretch of the imagination. The punchlines are in fact worthy of anything else I’ve heard on either side of the pond, with lines like “I stick to my guns, stick to my clique/you know what you get, I stick to the script/stick to the wall like Brundlefly” tripping my inner sci-fi nerd. From the ultra-minimal “Animal Instinct” to the heavy reverberations of the speedy “Beast Mode,” I would dare say that I dare you to give Virus Syndicate x Dope D.O.D. a try. You might be surprised by how much you like it.