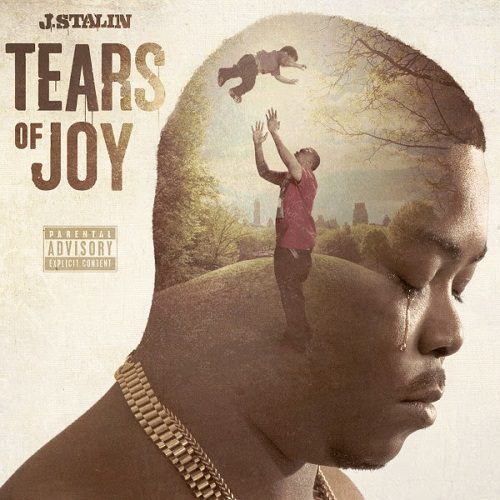 To reconcile opposites has been part of rap music’s agenda since the earliest days, or at least since the 1980s, when L.L. Cool J and Big Daddy Kane in particular established templates that allowed the (male) rapper to switch roles between fighter and lover intuitively. The winning formula can be witnessed to this day, changing in variation and emphasis. Oakland’s J. Stalin tells his very own version of the dichotomy of life. His late 2015 effort “Tears of Joy” echoes the 2013 double release “Miracle & Nightmare on 10th Street” (or “Miracle on 10th Street” and “Nightmare on 10th Street,” respectively) – a supposed juxtaposition of pain and joy that is solved in the familiar but still peculiar emotion when one cries tears of joy.

Obviously the title is representative of an emotional tone in rap that emerged in the new century, but the sentiment isn’t totally out of sync with Stalin’s own track record, despite his more traditional disposition. Actual accounts of him crying tears of joy are nowhere to be found on this particular album. On the surface, J. Stalin is a rapper like too many others. The most frequently used word in his vocabulary denotes a female dog. He makes it a point letting you know that he used to sell drugs, acting like he can never be sure that you got the point. The plainly titled “Selling Crack” is the self-incriminating J. Stalin song to end all self-incriminating J. Stalin songs, featuring the album’s most provocative lines by offering, “When you was listenin’ to Pac, I was sellin’ crack” and “When you was at the Million Man March, I was sellin’ crack.” At least he has the good sense to admit, “The crack game done drove me insane,” and “This shit’ll turn your heart cold.”

Altogether he very rarely breaks character by admitting that he’s actually rapping right now. He’s not a performer or writer that steers towards conclusions and culminations or incorporates emotional highlights and breakdowns. But he throws himself into songs wholeheartedly, steadily singing his lil’ ghetto boy lament (or, in his terms, the “d-boy blues”), providing the listener perhaps not with an emotional rollercoaster ride but an emotional ride nonetheless.

When one song’s key statement is “All I know is how to sell dope and flip shit,” then that is at the same time true and untrue. He manages to make it sound true, but his artistic skills are what render it believable. With “Tears of Joy” being officially listed as his 14th solo release, it’s evident that Stalin has at least one more talent next to turning over narcotics. As a rap artist, J. has a firm grasp on his image and the individual songs he puts it across. “What’s My Name” is a rhetorical question you have to earn to ask, and he proves himself worthy with unique (yet far from gimmicky) adlibs and well orchestrated verses that weave syntax, rhyme and melody elegantly together on this vintage Stalin track that Donny Cheeba produces with that typical bittersweet taste.

J. Stalin consistently evades the basic rapper tag. In another rapper’s songbook, “Instagram Gangstaz” would content itself with ridiculing online behavior, Stalin’s version wins through comparison with the real world (West Oakland), across the perspectives of both the observer and the participant:

“Nowadays niggas’ll kill ya for Jordans on your feet
They downed the lil’ homie, left his body in the street
The streets fucked up, nobody never call the police
They left him in a alley for a fuckin’ week
I watched his mama scrub the blood off the concrete
Ain’t no love in this game when niggas out here tryina eat
You fuck around and be identified by your teeth
Watch out for these wolves that come dressed as sheep
[…]
They left my nigga in a car with his head split
He died on some high-speed chase shit
I was outside grindin’ on the late shift
Cried so hard, nigga, I need a facelift”

The way he concludes the song with a clearly enunciated “It’s clear to see, nigga – I ain’t you” marks a notable contrast in a rap world populated by personnel who seems bent on not being understood.

And so J. Stalin attains a high rate of effective tracks. Simply put, he sounds convincing. Perhaps not in every detail, or in the rhetorical fabric of his lyrics, but when his vocals pour over Iamsu!’s ’80s-infused slow slap “We All In” or ride The Mekanix’ slinky R&B groove of “Never Change,” when his gun talk is sweetened by syrupy synths and snappy horns on “Thang Rang” or when instruments intertwine with knocking 808s on “Thang on Me,” the result is an occasionally odd but frequently winning combination.

At 21 tracks long, “Tears of Joy” is sure to misfire a few times. Closer “I’m Sorry” suffers from J.’s lack of lyrical focus. Unintentionally, it comes across like a half-hearted excuse with its “Whatever it is, I’m sorry” summary. A greater MC could have flipped that sentiment into a much more substantial apology. Likewise, “Mama’s Boy” wastes mic time with mundane threats while guest Mistah F.A.B. has no trouble staying on topic. “Jacka’s Prayer,” surely intended as a tribute to the slain Bay Area icon, could and should be more pressing. As a consolation, the posthumuous appearance on the track prior, “Think U Ready,” sees The Jacka lend his distinctive voice to a very Stalin type of song, as they ponder whether to take a relationship to the next level or not. But the inevitable girl songs have a bigger risk of ending up underwhelming. A15150’s Ruff Ryders knock-off beat for “Boppin'” at best evokes a smirk and efforts like “Bad Pussy Song” or “Fuck Rite” should have fallen prey to a proper editing process. Still the rapper himself probably knows best why he continues to write these songs and at least half of the time they totally work, as evidenced by “Running,” “Going Steady” or “Bye Felicia.”

J. Stalin is a reminder that we are still under the legacy of 2Pac. At the same time he’s also representative of what the ’00s made out of said legacy, a simplified, formulaic version of his music. Fittingly, tracks like “Face Shots” or “Now a Days” are reminiscent of the G Unit era that was marked by high-class production and dominant flows. Sadly, the political perspective is virtually absent, or only present in the darkest palette: “I’ll off a nigga mama if the price right / You stuck in the ghetto, that’s what your life like.”

Perhaps J. Stalin’s greatest quality is his concern to make the listener feel welcome musically, no matter the subject matter. He especially handles slower tempos with authority, radiating a calm you wouldn’t put past his pitch. And even with singers around he takes care of his songs’ melodical arch, to a point where his music attains a gospel-like character. Enlisting longtime collaborators The Mekanix and DJ Fresh and trusted slap stars AK47 and JuneOnnaBeat, in 2015 J. Stalin continued to provide his fanbase with the confident but sincere confessions they love him for, landing “Tears of Joy” in the upper echelon of his extensive discography.