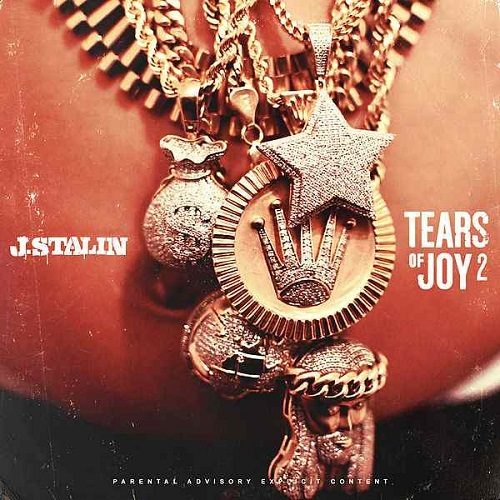 Visually, the chronological precursor to J. Stalin’s “Tears of Joy 2,” “Avatar,” looked like the poster for a hood horror flick that would risk copyright infringement by its sheer name choice. In reality, “Avatar” was strictly for (or about) the ladies and had as little to do with an overrated blockbuster as with Master P’s 2006 horror flick fail ‘Don’t Be Scared.’ Stalin’s latest draws on one of his own ideas, the predecessor called “Tears of Joy” from 2015. That would be his third official album sequel after “On Behalf of the Streets 2” and “Gas Nation 2.” The man’s got options.

Making up for the fact that “Tears of Joy” didn’t feature a title track, we’re belatedly treated to it at the top of its successor. Taking stock of his career, the Oakland rapper credits his profession as a musician for his actual achievements. “Just think, I did all this off rap tunes,” “been all over the world cause of the shit I write,” he offers. Although the two stages of his life may get mixed up in his music, the artist is aware that lacing drugs and making music are two very different occupations. Even so, as in the days of old, Stalin is reluctant to ‘just’ be a ‘rapper’. To insist on street credentials is an essential part of his program: “I’m real, and them other niggas actors / Them other niggas rappers / Me, I talk that trap / Me, I ride around the Town with a Mac on my lap,” he boasts a few tracks later.

Jovan Smith continually treads these lines, between joy and pain, street and studio, and any other juxtaposition rap music likes to throw up in the air. Listen to him run through “5 Minutes of Game” with ease, steadily dropping nuggets of game, and you realize why he’s able to crank out album after album. Even as he continues to say the same things in a similar manner, his emotional and factual quality carry J. Stalin the artist:

“What you know ’bout standin’ on the corner with that ready-rock?
My mama used to cook it in there lookin’ like it’s Betty Crock’
(…)
I’m the one who sold cocaine
Gave you the game, so you ain’t have to do it, mayne
See, my pain run deep, I’m so emotional
You wouldn’t understand my connection with the corner sto'”

The confessions continue with the Mozzy- and OMB Peezy-assisted “Make it Out,” before the topic matter becomes less existentialist with “The Code” and “Punishment” (the Too $hort cameo giving a strong indication as to where the song is heading). Even as he’s seemingly drawn towards differentiation, Stalin is as blunt as they come, see “Enough Money,” which dwells on the thinking that money is something you can never have enough of. Thankfully, in Stalin’s own thinking, there’s room for compassion (“I got niggas doin’ real time / niggas waitin’ on the pack on the mainline”) and even humor (“Pure coke have a nigga snout hella runny / Pockets hella fat but I’m hella bummy”) – albeit in measured doses. His standout performance here might be “I Come From the Trenches,” which he instills with a vocal intensity that is comparable to Ice-T in his prime. A far-fetched comparison, perhaps, but then again J. Stalin’s artistic roots do reach far back.

For listeners with an album-length attention span, the back end reserves the highlights “On This Corner,” delivered with a matter-of-fact melancholy in tune with the song’s theme and “Back Against the Wall,” that almost passes as soul food (for thought) Goodie Mob style:

“See, we from the ghetto, we play with ‘Ks
They say the Lord’ll shorten your days
My mama told me, ‘Son, you gotta change your ways’
My mama told me, ‘Son, you ain’t gotta change your ways’
See, these niggas hatin’ like every day
Buncha crab-bucket niggas in the Bay
Buncha jay cat niggas in the way
Ain’t help build the table but wanna play
I rather eat crumbs with a bum nigga before I eat a steak with a snake”

Musically, J. Stalin has always traveled light, but it’s remarkable how little actual drum sounds there are on this album. Reliable producers TD Slaps, JP Bangz, JuneOnnaBeat, AK47 and White Rocks provide him with the smooth support that has become essentially his. A musically more contemporary section kicks off with “Work For It” featuring Iamsu!, Ziggy and 03 Greedo, followed by the experimental DJ LVK composition “Tempo Slo” and the airy “Changed on Me.” The latter’s producer, Sparky Made It Slap, also signs “Feelin It,” a slowly unveiling nod to the Jay-Z classic from the ’90s.

“Tears of Joy 2” makes few missteps, taking into account the artist’s basic configuration. If anything, he surpasses expectations. J.’s recollections ever so often end in boasts, his girl songs in navel-gazing, but here he comes up with a number of classic rap formats (“Cousins,” “Changed on Me,” “On This Corner”). He may not want to be pigeonholed as a ‘rapper’, but he’s not really pretending to be anything else either. “Tears of Joy 2” finds him at ease and fully in his element.