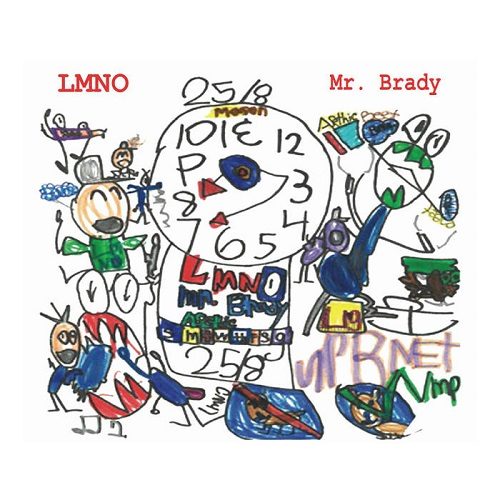 LMNO and Mr. Brady first collaborated back in 2010, when the prophetic alphabetic LMNO dropped TEN albums. I’ve mentioned in previous write-ups that L is one of underground rap’s most dedicatedly prolific emcees, but even I was astonished by how many albums he put out that year while doing my pre-review fact checking for “25/8.” It’s probably not a surprise that with so many albums in L’s catalogue we missed that one (and about two dozen others) so our apologies to both him and Mr. Brady. We’re on it this time around.

“The suburban homies tell me I’m too hardcore
I need to soften up a bit pull a Macklemore…
It’s all an image to portray
They’re not +Wild For the Night+ they’re just scared in the day
Playtime bandits, confiscate your toybox
Your boy knocks – this ain’t no ding dong ditch ’em” – “Rearrange”

Most listeners familiar with Brady will know him as a producer, a role he held the last time the two worked together, but on “25/8” he steps from behind the boards to tag team the rap verses with L. This required them to bring in a THIRD element to glue the album together, and Brooklyn’s own Asethic stepped in to hold down the beats. I don’t have the previous Brady and L album to compare it to, but on “25/8” it has mixed results. It’s not that they chose poorly – A doesn’t make technical mistakes or turn in anything that’s unlistenable – but there are tracks like “Pavement” that suffer from a total lack of energy or excitement. The raspy electronic guitar wasn’t a bad choice for a loop, but none of the elements added to it bring it to another level, and both emcees flow over it like they couldn’t give a f#%@ less.

L can be a laconic rapper even on his best days though, and his often monotone vocal delivery is (like the late great Keith Elam) a constant source of debate. He’s well met by Mr. Brady though, who actually manages to come in at a vocal tone deeper and MORE singular than his cohort. This may actually settle the argument once and for all about whether or not LMNO is a boring rapper. If not “maybe a lightning bolt could wake that ass up.”

38 minutes feels like exactly the right length for “25/8,” an album whose name actually implies overtime, but you wouldn’t want any bonus material or extra footage in this case. It’s mostly the slow tempo and delivery that are a buzzkill here, making even interesting experimental songs like “Clear” feel like a chore. On the other hand if you were tripping on lean, this entire album could be the underground West coast equivalent of a DJ Screw mixtape (may he rest in peace). Even tracks like “Champion” which have the potential to be energetic based on the beats never get out of first gear.

I really wanted to like “25/8” based on past experience with LMNO, but I’m going to have to give it a solid “meh” at best. Perhaps this ends up being one of those cases where L is so prolific as an artist it backfired. He’s largely going through the motions here, like an aging baseball player still collecting millions of dollars a year on his contract, even though he can’t muster up the enthusiasm to put in any effort beyond putting on his uniform. I know L can do better than this – and Brady just doesn’t bring it out of him.