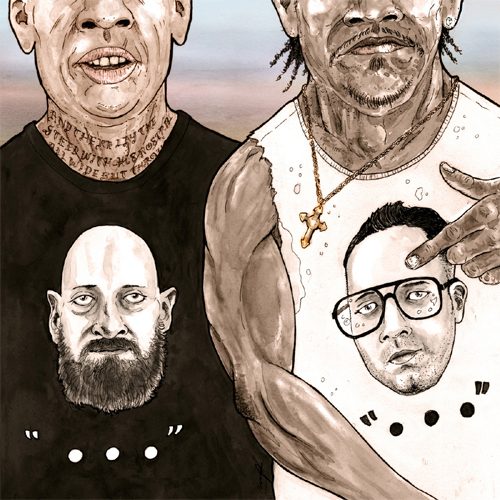 The MC Type and thewoods :: … (ellipsis)

First things first the name of this album is indeed “…” i.e. “ellipsis,” and the group is comprised of rapper The MC Type and producer thewoods, thus proving that the internet is destroying the English language and making grammar and punctuation meaningless. So there’s that. The MC Type is a rapper from Virginia, although he was in Seattle before relocating South. He put out a handful of releases before quitting rapping two years ago.

The easiest way to describe “…” is Atmosphere meets Macklemore and Ryan Lewis with some Postal Service thrown in for good measure. The beats are indie pop and EDM-influenced. Most of the songs are built around sung hooks, which gives them a catchy, musical quality. About half the songs are about getting drunk, hanging out with your friends, and trying to get laid, all delivered in an amicable, self-deprecating style.

There are also more serious turns on the album. Opener “Pieces” details why he quit rapping and “Can’t Stop” is about what brought him back to hip-hop. “Run from Me” and “Anywhere But Here” are about damaged people with tragic backgrounds. “A Sugar Too Sweet” is about struggling with addiction.

I can see how “…” might connect with some listeners, but it did nothing for me. I wasn’t feeling The MC Type’s flow, and his lyrics were often either cheesy or too self-serious. Ditto the singing. I had a hard time connecting to “…” or caring about anything The MC Type was rapping about. Even the tragic stuff fell flat, though it very well might be based on real people and they deserve props for tackling difficult subject matter.

Part of the problem is in the delivery, but part of the problem is that I’m not that into their influences. Atmosphere drove the “I’m a drunk who dates abused and damaged women” thing into the ground years ago, and I’ve never been a big Macklemore and Ryan Lewis fan. So “…” is a pass for me, but if the idea of melodic, indie-pop influenced hip-hop with normal dudes rapping about being normal dudes intrigues you, give this a listen.