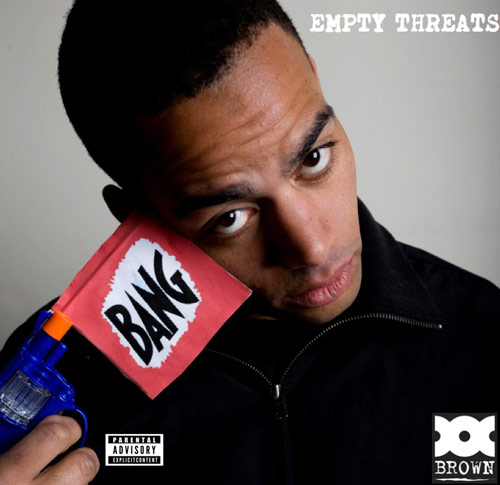 British Hip-Hop has generally had a strong sense of humor compared to its American counterpart, and for many it’s one of the best parts about the UK. There’s plenty of funny rappers on both sides of the Atlantic, the most memorable in recent years being Open Mike Eagle and YouTube sensation Dan Bull. Doc Brown is a unique individual however, in that he was largely a serious emcee who was a part of rap crew Poisonous Poets, whose most famous member was Lowkey. Despite bursting out on his own and releasing some solid albums himself, Doc Brown turned towards stand-up comedy after dabbling with writing spoof songs. He’s now (almost) a household name thanks to appearances on “Live From the Apollo”, children’s drama “4 o’Clock Club” and a key role in the British version of “Law & Order”.

Given how each track on “Empty Threats” is itself a comedy routine, it’s worth explaining each song’s value, particularly as they revolve around very British elements of everyday life.

Many of the songs are short meaning they never outstay their welcome, but “My Proper Tea” and “Semi on the Dancefloor” are clearly the tracks with most longevity. They are funny throughout and are both tracks I can see connecting with many blokes across the UK. They are also the better produced moments, with many of the beats being nothing more than simplistic backing for the clownish short stories.

“Empty Threats” is the purest form of comedy rap I’ve heard, in that it is a full album’s worth of songs written to make you laugh. It’s essentially a collection of songs that have been heard/seen before in sketches as part of Doc’s routines he takes on tour, and that’s where the album succeeds and fails. As a whole LP, it isn’t strong enough (particularly musically) to be a great record, but it’s also a huge breath of fresh air. Full of fun concepts and genuinely hilarious moments, with guaranteed laughs for both rap fans and everybody else, “Empty Threats” is as entertaining a record as anything you’ll hear this year.