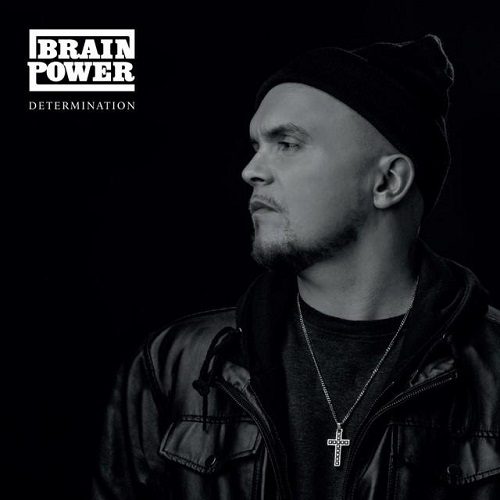 Some years ago I came across the Brainpower release “Mijn Manier” (‘My Way’). It was a retrospective covering the artist’s work from 1999-2009. Likely my purchase originated in a sudden random interest in Dutch hip-hop, and while I generally appreciate the overviews provided by DJ mixes, compilation records, YouTube playlists, etc. ultimately in such a situation I prefer occupying myself more in-depth with individual artists.

There were a few things I thought I learned from “Mijn Manier.” Brainpower is a fresh-faced, likable chap, who doesn’t have to pretend to be somebody else to win sympathy and respect. He’s the rare type of rapper who manages his career professionally. Business-minded but still keeping it commendably real in hip-hop terms. A silver-tongued motormouth who doesn’t forget to pause for thought. A guy who can actually rap. A profound rhymer with pop sensibilities making true school hip-hop with mass appeal. A jack of all trades and master of all. Or as he describes himself on a track from 2008, simply “an all-around MC.” All this I gathered from listening to 40+ songs that I didn’t understand because they were in Dutch.

In my defense I also had 30 official video clips to go by that were on the package’s third disc, a DVD. (Brainpower’s control over his own career extends to a ridiculously detailed Wiki page.) Still the language barrier obscures so much, and the only Brainpower songs in English that I could find were two collaborations with rock band Intwine. Until recently, that is, when I learned he put out a collection of 9 all-English tracks last year. “Determination” is, again in my own interpretation, a personal, later-career resume in the language so many (if not most or all) of our favorite rap songs are.

Although Brainpower automatically addresses a greater hip-hop public by rapping in English, I get the feeling that he doesn’t stray too far from his typical mode of operation on “Determination.” Some of his most accomplished songs have already been written, for instance “Je Moest Waarschijnlijk Gaan” (‘You Probably Had to Go’), a farewell to a friend who committed suicide, or “Even Stil” (‘Moment of Silence’), a reminder that we all need peace of mind sometimes, or his cross-generational collaborations with satirist Freek de Jonge. Still Brainpower finds ways to pen fresh songs in English that turn personal situations into universal statements. “I’ll say something positive to keep my song snappy: / ‘Stay strong and keep your head up!’ – But I can’t play happy,” he states soberly in “Play Happy,” which finds the rapper in the kind of depression he can only dig himself out of – which he does, through the song. Opener “Determination” doesn’t reinvent the self-motivational song, but by giving simple, clear-cut declarations and definitions it speaks loudly of Brainpower’s authority on the subject matter.

You wouldn’t be wrong to expect expertise in other fields from the Amsterdam representative, as BP shares his “Pot Thoughts” which oscillate between higher understanding and impaired cognition, like “The Roc wanted to sign me, and I was hyped as fuck / Dropped a freestyle for Jay but did it all in Dutch…” There are a couple more references to his origin and position, including the realization that there are worse prospects than being a white rapper. Brainpower belongs to a generation that has taken certain values to heart. Values that he associates with a certain time, so his first English album sees him traveling back in time not once but twice, with the strictly ’85/’86 homage “Rock” and the less time bound throwback “From the Art.” It seems important to him to honor the heritage on this special occasion.

Like any rapper with an extended lifespan, he’s equally driven to deliver inspiring messages. While the title track can do without tugging at your heartstrings, others are more heavily emotionally equipped. Placed at the end, “Time to Fly” is the kind of aspirational/inspirational tune that always get a pass when they come from someone who says of himself, “I put my all in my music.” By the same token, “Don’t Let Go” is just too predictable with its polished instrumentation and lyrical platitudes. Meanwhile the song category ambivalence Brainpower aims for with “Troubled Soul” is also jeopardized by rather commonplace emotional expressions. Brain does a much better job with “People,” which celebrates family and friendships over firm soul claps.

How many bilingual rappers do you know who actually have the courage to get up there and express themselves in both languages? Even if he may have (re-)embraced English only recently, “Determination” is Brainpower’s successful baptism by fire as an anglophone MC. Although it lacks the visionary brainstorms that bring forth truly timeless hip-hop tunes, it is in every respect a professional piece of music containing several standout tracks such as “People” and “Play Happy.” Brainpower’s career lends credence to his thoughts on the challenge of staying true to yourself or the difficulty of maintaining relationships. After hearing Brainpower express himself in rap’s original language as well as in one of its many vernaculars that unfortunately only the locals understand I’m more than willing to agree with the man: “A lotta rappers, few essential MC’s / Can’t go to Holland without mentioning me.”