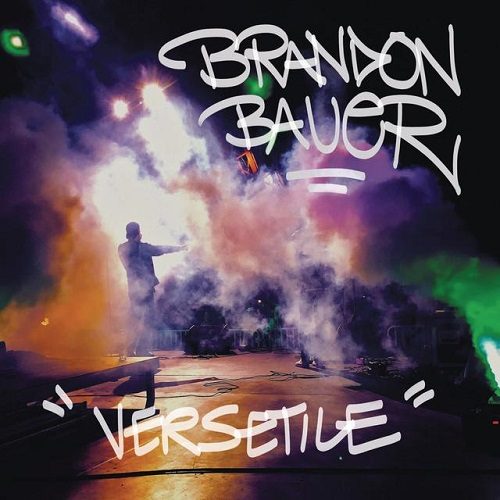 If you actually stopped to listen to the Syrian war refugees that knocked on Europe’s doors in the past years, you may have noticed how well many of them speak English. It clearly went beyond journalists singling out that one person whose rudimentary English skills are good enough for a soundbite in a TV report. More than ever people around the globe are learning languages to help them get somewhere in their life, although probably none of them would ever imagine they will be forced to get there as war refugees.

This has seemingly little to do with Finnish rapper Brandon Bauer except for the fact that English facilitates communication and expands one’s sphere of influence. In this specific case it enables the reviewer to understand a vocalist he wouldn’t understand if he expressed himself in the language of his country and to officially cover his music for an international medium. Brandon Bauer gets heard on RapReviews.com because he raps in English. It doesn’t have to be that way, but there’s an undeniable logic to it. Basic knowledge about hip-hop culture is in most cases not enough to write about foreign-language rap. At least the critic should be roughly familiar with what’s being said.

Besides these advantages, there’s an even more obvious reason why Brandon Bauer raps in English. He was born in the States while his mother, a Finnish Olympic athlete, was living in Florida. They eventually relocated to Helsinki, but from the way he sounds it’s evident that he kept in touch with the US over the years. The rapper released his official debut, “The Outcome,” in 2005, and ten years later the “Versetile” EP marks his comeback as a solo artist. In between (from 2006 to 2014) he held one of the most interesting jobs the rap world ever had to offer. He lent his voice to deaf rapper Signmark, an actual MC who expresses himself lyrically and in sign language while employing hearing persons to translate his thoughts to music and vocals. This adds a whole new, very fundamental dimension to any reflections about communication in the field of rap. With that kind of experience Bauer has likely given the subject a lot more thought than the vast majority of rappers and rap fans.

With a title that suggests a combination of lyrical aptitude and stylistic diversity, “Versetile” would have quite a few things to live up to if Brandon Bauer was a familiar figure in hip-hop. Since he’s not, let’s look at him like a fresh face who has put his new EP online. Brandon (as he was simply known for most of his career) has labelled his music a mixture of rap, rock, and R&B, which for this EP isn’t that far off the mark. All six tracks incorporate electric guitars and don’t correlate with specific genres. It’s an uncomplicated, albeit sometimes unfashionable mixture that ultimately results in pop rock with a marginal hip-hop edge. It fits the chipper mood we find BB in. Although he initially comes across moody with his rocker’s grumble, the rockstar attitude, insofar as it’s even there, comes with a down-to-earth undertone as he encourages the listener that “it’s not too late to become you” (“Become You”) or tells of his own learning experiences (“Grow”).

The music on “Versetile” aims to elicit unambiguous emotions, it wants to relieve and unite its audience. The vocalist is present to face the music and simultaneously make the music, part sinner, part preacher, delivering vignettes like “Hard to find sanity in the land of vanity” or “Get your shit together, you are fit for better.” It works on “Become You,” where he finds his role among the “Hey-hey”‘s and “Oh-oh-oh-oh”‘s and horns, harmonicas and driving guitars. Also the time-tested pop rock patterns of “Grow” allow for a suitably charismatic performance, including a self-sung hook: “We all got our reasons / And we all got our demons / But if there’s one thing I know: / All you can do is grow.”

Since rap and rock can stand only a limited amount of educational values, Brandon gets into his rebel stance on three singles. “Run Free” features only a filtered female sample, but “Put Me On” and “The Flavor” profit from local pipes who have already echoed beyond their native. Osmo Ikonen, lead singer of rock band Sunrise Avenue, hints at his fluency in both rock and soul on “Put Me On,” as Brandon polishes up his rap credentials: “Wordplay addiction, the fix kicks soon as the drums drop / The vocals are sicker than what a bum’s lung coughs / So run, run off and go warn the villagers / Cause tonight I’ll be killin’ it…” As for “The Flavor,” there’s no reason this couldn’t have crossed over and entered the charts somewhere outside of Finland. This year’s Finnish contestant for the Eurovision Song Contest, Sandhja, becomes the contempo-retro groove and both vocalists translate the incendiary theme well to their performance.

“Versetile” is not for every rap listener. Some will find the artist’s entire approach flimsy and corny while others will ignore white Finnish rappers with American accents as a matter of principle. They won’t be persuaded by Brandon’s account of past and current hardships on “If I Fall.” They will care little if he argues, “So before you second-guessin’ that judgement you’re passin’ / keep in mind my profession is my passion.” I too have my reservations about rap dabbling too much in pop and rock, especially with average song material. Ultimately, however, as a critic I can only give an account of what I understand, and for the time being I understand Brandon Bauer and his music better than a lot of other contestants on the international market.