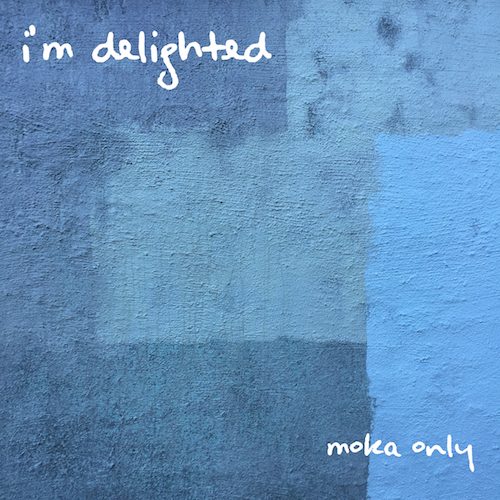 The “Delightro” to open “I’m Delighted” by Moka Only is like an all-star cast of underground hip-hop leaving voicemails for one of their own. In a matter of seconds I’ve heard Myka 9, Dan-e-o, Von Pea and Donwill leave their messages of support for Moka’s new album declaring just how delighted they are to be part of the project.

The moment that track ends is precisely the moment where “I’m Delighted” becomes a box of “Donuts.” That’s not a bad thing in any way, because as the late great James Dewitt Yancey knew, donuts are a sweet treat that don’t take long to eat. Unlike this year’s previous Moka albums, which are coming at a rate faster than I can keep up with (even though I alone seem to be reviewing them), this one features none of Moka’s vocals — not even his alter-ego Ron Contour is here.

I thought I’d be reviewing another of the prolific Moka’s musical creations and in fact I AM, it just caught me by surprise that this is more like one of Deep’s albums. In truth an instrumental album was the mental electric relaxation I needed this week as I stare down a mountain of work where I don’t seem to be getting any closer to the top because the peak keeps getting further away. I don’t know if Moka is ever going to reach his peak either, unless he simply burns out on the task he’s set to produce more music than perhaps any other rap artist in history. It’s hard to catch a specifically poor moment on “I’m Delighted” that would give one that impression, unless you counted outright stylistically copying Dilla’s steelo on tracks like “Gotta Automate.” That to me isn’t a flaw though — the flaw is that just when you get in a groove bobbing your head the song suddenly ends.

There are no easy choices when you’re given a box with two and a half dozen donuts minus one (Moka must have ate the mocha chocolate one with sprinkles). I dig the ivory keys iced throwback “Peenanno” though, the 1990’s No I.D. flavor of “Hup Hup,” the dusty Soul Assassin vibe of “For the Payyy” and when Moka decides he’s “Going In” with the horns and whiny synth funk I’m going right along with him.

Is this an all time classic? I might have given you a false impression with the “Donuts” references, but it’s not quite THAT good, while it’s also certainly not bad in any respect. If you simply wanted to get down with approximately 40 minutes of quality instrumentals, “I’m Delighted” is a chill way to pass the time, though not a profound or life-changing one. It’s also kind of odd that in a year where Moka seems to be striving to release at least one album every month that he’d craft so many usable beats and then just set them aside for a beat tape. Later on he might regret not rapping on a few of these.