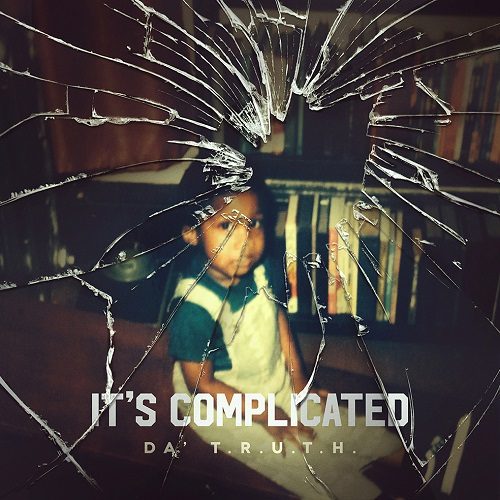 Several years ago Christian rapper Da’ T.R.U.T.H. briefly appeared on my radar when he was the musical guest at a teenager’s birthday extravaganza on MTV’s My Super Sweet 16 show and when indie rap giant Tech N9ne mentioned him in the song “Holier Than Thou.” Both these chance cameos point to a potential role as a mediator between two worlds. He’s the rapper religious parents deem appropriate for their daughter’s birthday bash, and he’s the role model a spiritually inclined secular rapper like Tech N9ne looks to for advice (a plea that was – apparently – met with silence, hence the reproachful “Holier Than Thou”). My notion before going into his new album was that crossover sensation Lecrae is actually the MC who walks that line best, and if I let Tech tell it (in his typical impulsive manner), Da’ T.R.U.T.H. would be the kind of Christian artist who is happy to preach to the choir, reflecting the self-contained attitude of certain Christian congregations who divide the world into ‘us’ and ‘them’.

I wouldn’t have bothered to familiarize myself with Da’ T.R.U.T.H. at this point if it wasn’t for the title of his latest, “It’s Complicated.” Simple answers are always suspect to me, so any record with a theological footing that actually dares to admit that “it’s complicated” has my attention. And I probably shouldn’t complain that said record is itself complicated (or further complicates the matter for me). I don’t regret occupying myself with “It’s Complicated,” because it’s a challenging piece of music that has accompanied me for several weeks.

One thing that simplifies the matter for me as an outsider is that Da’ T.R.U.T.H. doesn’t object to the label ‘Christian rap artist’. He spreads the gospel, and while his exact beliefs may put him in a certain denomination, he talks about Christians and Christianity, about religion and the church in a broader sense. He is most certainly not simply preaching to the converted. His rhetoric may carry specific inner-church baggage (which I’m not able to specify), but he also says things like “Man, we done did it all, we been adulterants and pedophiles / I know you don’t expect it from a man of God” and “I understand what they feel when they say that religion kills / African slave trade, the walls that the Christians built / Bibles used for oppression, the West on a mission field.”

These quotes aren’t just soundbites, they are part of more extended argumentations found in the album’s songs. One of the most compelling examples of the rapper’s soul-searching is the middle verse of “The Greatest Need”:

“I had a dream, I stood on the world stage
It was the Pope, a pastor, the Dalai Lama and a Imam
And they all represented the world’ face
And I looked at God with a weird face
Cause He wouldn’t let ’em in the pearl gates
And I’m tyina wrap my mind around it
Why would God not allow it?
Ain’t like they drinkin’, smokin’ marijuana
Ain’t like they gangbangin’ – What’s the problem?
All they ever wanted to do was see His face
Stayed devoted with sincere faith
Only to be disappointed when they got to the top of the staircase
I’m like: What does He want? Is that not enough?
I seen devout Jews at the Wailing Wall with a lot of trust
Prayer rugs and Qur’anic books
Fastin’ until Ramadan is up
I’m just tryin’ to get down to the bottom of…”

What separates true believers from us average skeptics and cynics is that they eventually overcome their doubts. On a whole humanity’s pursuit of the divine may be driven by questions, but individual faiths want to deliver answers. In short, while Da’ T.R.U.T.H. allows tough questions, his answers are just as adamant. In all probability they make sense in his particular belief system. Whether that’s the case for greater Christianity (not to mention other faiths or agnostics and atheists) is another question.

“The Greatest Need” stresses the need for a savior, which is evidently one of the principal arguments of Christianity. “Mixed Signals” deals with the fact that the Christian god is both forgiving and vengeful, an impression that shouldn’t be foreign to most Christians. “Judge” (probably a double entendre with ‘chuuuch’) admits that churches have been wrong and done wrong but winds up lobbying for them anyway, pointing to the essential role of Christian organizations in charity and even the fight for civil rights.

And so “It’s Complicated” often finds Da’ T.R.U.T.H. defending and amending the Christian faith, in tune with the presence of noted Christian apologist Ravi Zacharias, who can be heard on several tracks. “Religion” is designed to disprove those who argue that we all believe in the same god (us monotheists anyway), but in the end it’s one more argument that Christians are something special. In the same line “Copycat” counters the thesis that the Christian faith was merely an update of existing spiritual concepts.

“Misconceptions” wonders if, for example, Christopher Wallace should be eligible for a place in Heaven since in his “Suicidal Thoughts” The Notorious B.I.G. imagines Hell to be a more suitable afterlife for a individual like himself. It is perhaps at this point where the casual observer begins to ponder the weight of someone like Da’ T.R.U.T.H. as an actual artist. I’m all for references people can relate to. The scriptures of the Abrahamic religions, including the Bible, rely heavily on them (so heavily, that later generations sometimes have trouble relating to them, but that’s another story). But Biggie Smalls the rap persona and Christopher Wallace the rap artist were not one and the same, and when I hear a song named “Suicidal Thoughts” I myself am aware that I’m facing a phenomenon where two extraordinary circumstances coincide. It’s 1) an artistic discourse on 2) a difficult personal situation.

Even though he also discusses existential issues, Da’ T.R.U.T.H. cannot be called a philosopher. On “It’s Complicated” faith ultimately takes precedent over art, and while that doesn’t necessarily mean that we’re dealing with a bad artist, the songs are rarely fully conclusive to bystanders. Nowhere does it feel like he seals the deal as a songwriter, as a rhyme writer. This essential flaw is all the more unfortunate as Da’ T.R.U.T.H. delivers where others so often fail. He’s a versatile MC and hip-hop musician, the artistic realizations ranging from the “Me Against the World”-era Pac study “Judge” to the soulful KB duet “Why So Serious” and the epic Christon Gray-featuring “Heaven” to modern set-ups like “Mixed Signals,” “Misconceptions,” and “Perfectly Human.” There’s a dialectic quality to both his bars and the song sequence, which is actually one point where rap and religion meet.

If honesty is the best policy, then Da’ T.R.U.T.H. got the drop on many secular rappers. On “Color Purple” he places himself in a sociopolitical center that considers both conservative (red) and liberal (blue) stances and strives for a consensus within the Christian community. He addresses these issues not merely academically but deals with them from a personal perspective. The rapper wrestles with god and everything that comes with it, and it would be malicious to assume that it’s simply slick pulpiteer rhetoric.

Still in its essence “It’s Complicated” is a hardcore Christian rap album. There is just no lighting up for this rapper. “The Reason” may begin with a “Fresh Prince of Bel Air” reference (he’s from West Philly as well) and follows young T.R.U.T.H.’s awakening, but quickly turns into a discussion about the meaning of life and the origin of creation. (Still the track itself vehemently suggests a collaboration with Freeway, last but not least because he’s Muslim.) “The Vow” stresses the singularity of marriage. It would be foolish to assume that on “Why So Serious” he would take the opportunity to challenge dead serious pious people because the song’s only point is that he just can’t help being serious. And when he bursts into an Auto-Tuned wail on “The Greatest Need” about how good is never good enough for a Christian because only the sacrifice of Christ is what saves us you sense some of the burden that particular religion can impose on its followers. And finally when “Mixed Signals” culminates in the sung words “You are such a mystery to me” I’m reminded of earlier instances in rap when Five Percenters mocked the Christian “mystery god.”

Which brings us back to the title of this album. As a nominal Christian from another continent I am wary of Christians to whom Jesus Christ is the answer to everything. On the surface T.R.U.T.H. doesn’t strike me as that type of guy, but I do have the suspicion that that’s what he’s trying to tell me either way – ‘It may seem complicated, but it really isn’t once you accept Jesus Christ as your savior’, etc. It doesn’t really feel like he’s getting ‘to the bottom’ of the fundamental issues he addresses, at least not in a convincing way. In between, however, he has a lot of worthwhile things to say, much like the supposed Word of God that inspires his life.