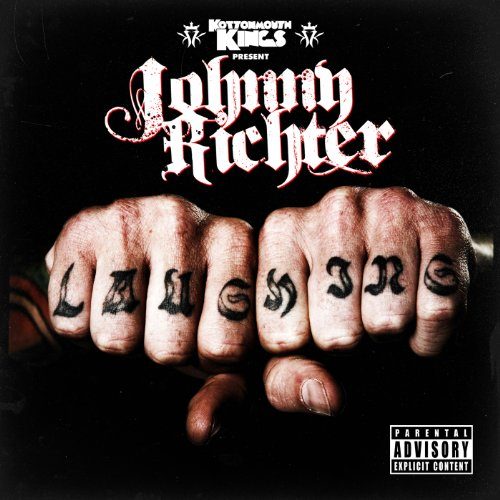 The Kottonmouth Kings have been a juggernaut in underground “Rip-Hop” music for over a decade. Recent albums like “The Green Album” and “Long Live the Kings” have solidified their already large following while working hard to find new converts. While I can’t say every KK song will go down as one of this critic’s all-time favorites, there has always been three things about the Kings I could respect – their hustle, their live show, and Johnny Richter’s rap.

“I kept it tight and never dealt with no strangers
Then I started makin money bein an entertainer
Tryin to do right, with it came responsibilities
Out of the game now, but still I be servin trees”

The piano driven “Evolution” shows where Richter is at now and where he’s headed on his solo album “Laughing.” While he proudly professes to be “a member of the biggest underground weed band” he’s also looking to branch out on his own as a soloist and try different things. Of course even while he’s on his own trip sans the KK crew, there’s still going to be at least one or more references to pot in every song, because some things never change and never should. Other than Cypress Hill the Kings may be hip-hop’s biggest advocates of Proposition 19, which means many of the “underground” things they’ve done wouldn’t have to be underground any more. By that time Richter may already be far overground, trading heavy beats and crunchy rock for smooth tunes like “Remember That Summer.” The strummed melody and sung lyrics are more Kid Rock or Everlast than Kings’ material of the past:

“When we used to hang out at the park ’til after dark
and make a beer run we had so much fun
In those, timeless years with those, priceless days
Without a care in the world man I never would trade
the memories that were made are un replaceable
I never knew that so much fun was even possible
To have we laughed so much it’s runnin amok
in the back of pickup trucks, not givin a WHAT?”

Despite appearances thus far Richter hasn’t abandoned his Kingship completely. Dirtball shows up on “Nice Cold One” so the duo can profess their love for frosty alcholic beverages, and the hand clap beat should make it a favorite at parties and on tour. Daddy X joins the set for the slow flowing “Hello World” as Richter croons a surprisingly depressed tune, with a plaintive cry to connect to humanity in what could almost be a post-apocalyptic world: “Is anyone out there? Is there anyone who’s listening?” If these songs aren’t rip-hop enough for KK fans despite the cameo appearances, hard tracks like “Puff Pass” and “Gangsta Bitch” will be a welcome return to form.

There’s a fine line to be walked with the rip-hop style that the Kottonmouth Kings espouse – sometimes it’s perfect for the mosh pit and other times it’s just monotonous. Since Richter has in the past been the most lyrically lucid of his pothead pals he’s the ideal choice for a solo album, and obviously felt comfortable enough going solo to sing as well as rap, and get more personal on tracks. These are good decisions artistically, but it’s up to the two million plus who bought previous KK albums to see if they’re down with his experiment. In this writer’s own estimation the end result doesn’t stray so far from a Kottonmouth Kings album that those fans would turn on their main man Johnny Richter.