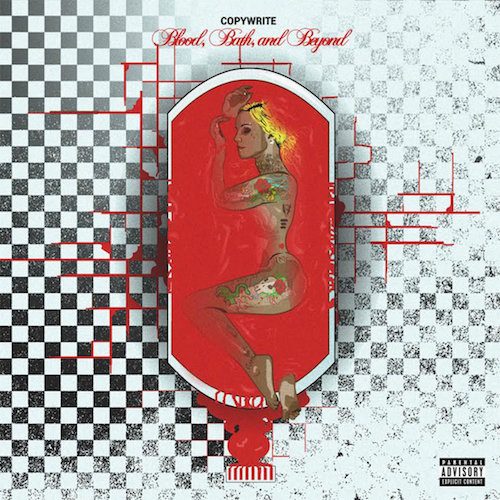 Copywrite :: Blood, Bath, and Beyond

If I know anything about Copywrite it’s that he doesn’t worry much about copyright, as evidenced by an entire album made of Beatles samples. The fact the audio clips have disappeared from the review since publication means that somebody probably spoke to Mr. Nelson (quite FORCEFULLY I imagine) and told him that he’d have to retire all distribution of it post haste. Hip-Hop sampling has always walked a fine line between artistic creativity and legal ownership anyway, with the daring lifting clever snippets for artistic mixes wantonly, while the more cautious take notes on whatever they used and pursue (prohibitively expensive) sample clearance. As Reggie Noble once quipped, “I give credit cause I’m cautious about lawsuits.”

I can’t help but wonder what Copywrite had to pay for “Rick Roll” then. Besides the obvious Rick Astley sample you’d expect, there are frequent “Ante Up” refrains of Lil Fame loudly screaming “TAKE MINKS OFF! TAKE THINGS OFF!” Lacking production notes I can’t tell you who came up with this deliciously demented melody, but if they didn’t pay for all of these loops they probably don’t WANT the credit anyway.

If this is your first exposure to Copywrite let it be said that he’s a Columbus, Ohio native and member of MHz Legacy which included the late Camu Tao until his untimely passing in 2008. Copywrite made his reputation as a battle rapper but over the years has delved deeper into strange songs and storytelling, both of which are exemplified in the sing-song track “OCD ADHD.” Trigger warning when he says “I see myself and I SCREAM” because he really does SCREAM at the top of his lungs.

I got excited when I saw Mr. Nelson had a track called “Tender Moments” featuring Dominique Larue and Ras Kass, but this turned out to be a “rickroll” all its own as it was just a voicemail with the aforementioned artists leaving Copywrite a shoutout (with Ras Kass gleefully calling him PETER). That’s alright though because skipping ahead just got me to AC/DC sooner. Wait, what? I don’t even want to know what the budget was for Copywrite on this album, who is really living up to his name by sampling “For Those About to Rock (We Salute You)” on the song “Axe Me” featuring Playdough Press.

The old battle rhymer comes out on “Hide-N-Seek” as Copywrite boasts “We intend to kill, and reinvent the wheel/send CNN to film, cause we ain’t into chill/so keep the red dot runnin while I red dot gun ’em/head shot, bring ’em to a dead stop.” Not only is he being vicious you’d find this song perfectly at home on a “Call of Duty” soundtrack — and “incidentally (he’s) f–ked up mentally” too as if you didn’t already guess that from the copious amounts of pharmaceuticals he consumed in “OCD ADHD.” Some might argue that Peter Nelson is Marshall Mathers without Dr. Dre and the worldwide fame. Actually listening to “Louder!!” I might make that argument, even though quickly shoots down that idea for me with the words “Rakim made me, not +Slim Shady+.”

The actual “tender moment” of this track is when Copy decides to get hella personal with an ode to his grandmother on “Na Na,” vowing he’d go to hell and back for her given the chance. It just goes to show no matter how much of a hardrock you are on the mic, everybody gets the feels when it comes to their grandma. It’s weird to say this given just how long Copywrite has been around (dating back to the late 1990’s) but I think “Blood, Bath, and Beyond” is my favorite album from Mr. Nelson to date. I just hope he got every last one of those samples cleared so that the readers get a chance to hear it too.