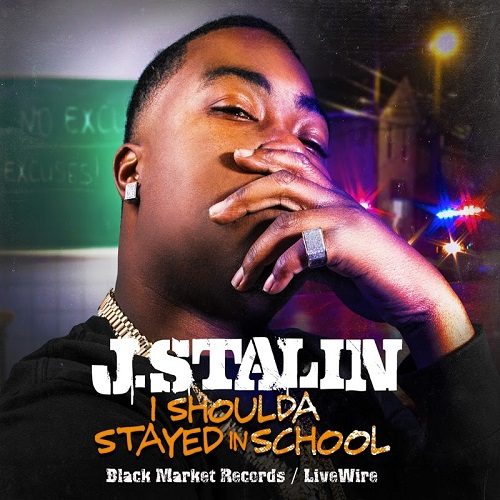 They say that hindsight is 20/20. The title of J. Stalin’s summer offering (an intermediary release before celebrating his breakthrough year 2006 with “On Behalf of the Streets 2” on October 28th) is among the classics. Although it’s not particularly a regret you expect to be expressed by rappers, because they often think differently. New York’s Queensbridge veteran Poet once put it like this:

“I shoulda stayed in school, but that’s a dead issue
Fuck a G.E.D., that’s like toilet tissue”

Well, rap has learned a thing or two since the heydays of irresponsible and irreverent behavior, and even if school is still not cool, today’s generation is perhaps more prone to understand the worth of education. Since Kanye West’s curriculum vitae-cum-music career start possibly even the worth of higher education. With his distinctly old school mindframe, it’s easy to assume that J. Stalin himself effectively didn’t stay in school for too long. But he’s wise enough to let malleable members of his audience know that schools can get you further than the streets (for example on last year’s “The Finer Things in Life”).

However on the occasion of “I Shoulda Stayed in School” he refuses to probe deeper into that particular message and instead revisits the teachings of the school of hard knocks he went through. These things should be familiar to the J. Stalin fanbase and the greater rap audience, still songs like “I Don’t Believe You” do have the potential to go further, especially when they so neatly fit into the modern pop market (with the help of producer Donny Cheeba and singer Lecsi 2marrow). B.o.B reached millions expressing his professional woes and wishes on “Airplanes,” and somewhere there’s an opportunity waiting for the J. Stalin kind of artist with a more profound story to tell than the artificial come-up narratives from Drake and his commercial cronies. Apart from the fact that J. Stalin’s nom de plume would likely invite protest once he arrives at a higher level, rap as a whole would only benefit from people hearing some, pardon the expression, real s–t once again:

All things considered, Stalin himself doesn’t need that crossover hit, as he professes to be “underground gettin’ money like I’m mainstream.” Plus that “I Shoulda Stayed in School” regret can only be half-hearted since he seems to be completely comfortable where he’s at, turning his former illegal trade indirectly into money by rapping about it. He exhibits a work ethic that you don’t acquire in school, and he fills his songs with many other lessons he learned on the street. All this he does in a highly dedicated but also often directionless manner. He gives you the full-blown rhetoric of street rap but usually lacks the finesse of the genre’s greatest when it comes to song construction and lyrical competence.

So ultimately “I Shoulda Stayed in School” (curiously enough put out in conjunction with Sacramento’s notorious Black Market Records, the label who once brought us Brotha Lynch Hung and X-Raided), is another easily enjoyable but at the same time frustratingly below-average release from an interesting rapper with a unique musical taste and the kind of style that can spiff up banal form and content anytime (“Violin”). It essentially plays out like any other recent J. Stalin record. As so often, Stylin is a small but crucial step away from something bigger, something fresher, something more epic, something more enduring. Still at the very least he proves his album title wrong in the best possible way.