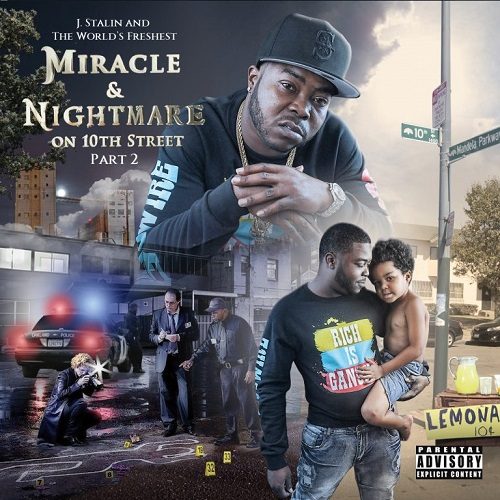 When does generous turn to wasteful? We are living in rewarding times. No music publicist and journalist can go without telling us that so-and-so artist ‘shares’ or ‘blesses’ us with new music. We’re blessed indeed. Musicians share their work with us, in exchange for a brief moment of our attention. Few rap artists have such a high share of new music to share as 32-year-old J. Stalin. He also aims to be the rapper with the most sequels, which indicates that he still abides to the album format. The original “Miracle & Nightmare on 10th Street” from 2013 at least had the semblance of telling a worthwhile tale, how does “Part 2” fare?

The release too is divided into a Nightmare and a Miracle side, and even less so than before we are allowed to see why. Listeners familiar with the Oakland rapper should be in for one steady déjà-vu. You need a fine-tooth comb to spot remotely remarkable features on “Part 2”. It seems that Stalin has run out of the kind of anecdotes and analogies that made him stand out among trapping rappers. We really have heard it all before – and usually better. But for the sake of accuracy: The rapper is musician enough to let the music play during the opening minutes of “Nightmare on 10th Street Returns”.

At one point he alludes that he may spend more time (or at least more money) in Los Angeles nowadays than in the streets where most of his raps take place. “Facts” manages to concentrate on a topic – pimping – and presents a guest – Mitchy Slick – who provides a little bit of star power. “Childhood Dreams” features the solid vocals of Vellione and a saxophone. “Ain’t it a Blessing” is able to express gratitude, showing him capable of adjusting his attitude. On an album where women are strictly seen as sexual servants, “Nigga Like Me” actually cautions them to pursue a romantic interest. “What You Want From Me” makes the much better arguments than the excruciating “I Don’t Love These Hoes”. And “I Be Living Lavish” is the overall most creative offering with bars bursting with rhymes and a stealthy track that sublimely strings jazz and funk together.

The rest of the 20 tracks/60 minutes don’t meet higher expectations. J. Stalin and DJ Fresh have a long history together. They have proven their chemistry across dozens of successful collaborative songs. But on this release Fresh’s glitter funk begins to lose its luster. The ersatz electro funk that can be heard on tracks like “Cash on Delivery” and “Pussy Nigga” never really slaps like it’s supposed to. His flashy eighties décor works best when he doesn’t just plaster shiny and sirupy synths all across a track but steers in the direction of more gangsterish grooves, such as in the case of “Trappin’ Addict” or “Facts”.

Stalin may be a rapping machine, but struggles to find substantial input. Lyrically, he often takes a bait-and-switch approach, establishing interesting ideas that go nowhere. Lines like “You never seen money with a blackman’s face / but I swear, muthaf—a, I done had my cake”, “You niggas watered down like Pedialyte / Ya ain’t never held your own in a gun fight” or “On my Diddy shit, cut my old bitches out the pictures / Then pass ’em back to DJ Fresh like it’s a flea flicker” only momentarily command attention because they’re loose threads and not part of a tighter lyrical fabric.

J. Stalin is not a perfectionist, he can’t be at the rate he records and releases music. As far as being unfiltered and old school fresh, the sequel to “Miracle & Nightmare on 10th Street” shouldn’t disappoint his most ardent fans. As far as getting more out of the comfortable position he finds himself in (having an actual fanbase), Stalin deliberately puts quantity before quality, which is all the more frustrating because he’s not totally unfamiliar with quality.