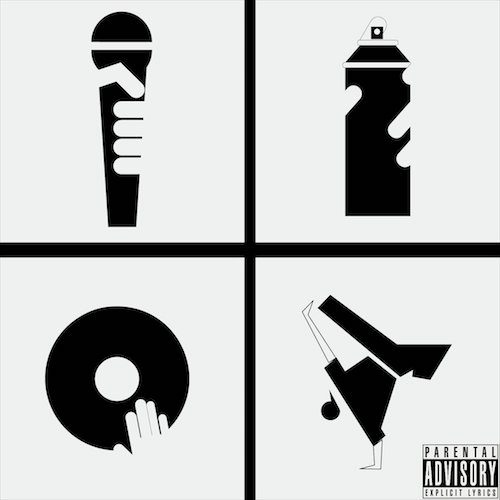 “Dope Lab Oration” makes its purpose clear with its cover, which includes graphics depicting the four elements of hip-hop: MCing, DJing, breakdancing, and graffiti. This is an album focused on the roots of hip-hop, on the days before MP3s and Auto-Tuned hooks. The EP features Virginia Producer/MC Rob Giano on the mic and Santa Barbara-based producer Sinuous on the boards, and is six slabs of unadulterated hip-hop.

Giano is a rapper whose faith informs his rhymes without overwhelming them. The tracks here are all on a positive tip. Giano celebrates old school hip-hop on the bouncing “The Elements.” He manages to mix bragging about his skills with calling for justice for the marginalized and describing how he uses the word of God as a sword in “Wassup.” On closing track “Signs” he raps about the epidemic of violence in the U.S.:

“Rest in peace to the fallen
America’s got problems like
Everywhere else in the globe, son
You stay in denial like third world culture is dangerous
At least they know they fighting”

Sinuous provides smooth, sample-based beats. He juxtaposes string and piano samples with hard hitting drums. Like Apollo Brown, he references and pays homage to golden age hip-hop while keeping things contemporary. That’s a good description of the EP as a whole. There is certainly a lot of reverence for the heydays of ’82 and ’92 on “Dope Lab Oration,” but it isn’t just a nostalgia trip. If you are looking for some classic hip-hop, with a focus on sampled beats and lyricism, check out “Dope Lab Oration.”