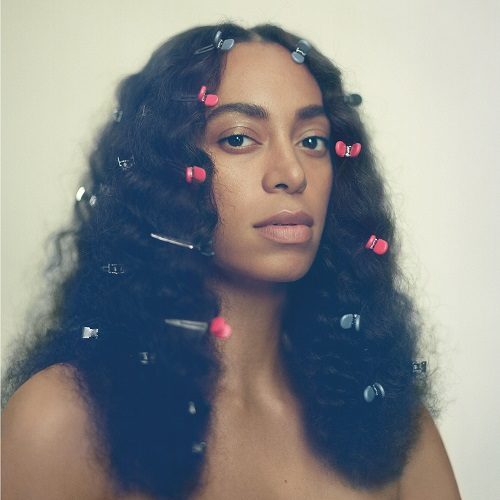 Solange Knowles :: A Seat at the Table

Solange Knowles may not be as famous as her big sister, but she has been involved in music for almost as long. She’s been making music since the early 2000s, but it was her “True” EP in 2012 that put her on the map musically. While her older sister was busy dominating the pop and R&B charts, Solange’s music was a hit with college and indie radio. Her music feels more a part of indie/alternative R&B artists like The Internet and Frank Ocean.

Her latest effort, “A Seat at the Table,” manages to carve out space for itself even in the shadow of “Lemonade,” an album that happens to deal with Solange’s well-publicized altercation with Mr. Beyoncé in 2014. Like “Lemonade,” “A Seat at the Table’ is a confessional and personal album. While both albums are excellent, “A Seat at the Table” is my personal favorite because it doesn’t need to be bombastic or mainstream. There’s freedom in not having to shift millions of units or appeal to billions of fans, and Solange uses that freedom to take chances musically and conceptually (although “Lemonade” takes a lot of chances as well).

The titles of the songs alone encapsulate a lot of the struggles and conversations and arguments that the African-American community has been having in post-Ferguson (and now post-Trump) America. “Weary,” “Mad,” “Where Do We Go,” “F.U.B.U.,” “Don’t Touch My Hair.” It’s the soundtrack to a woman coming into herself, taking pride in herself, and trying to find a way to exist in a world that fears and resents her for being who she is.

There is anger and frustration on “A Seat at the Table,” but mostly there is a lot of love and beauty. This is a gorgeous album, full of subtle arrangements that highlight Solange’s voice. Even at her saddest, there’s a sense of joy and hope in her voice. “I’m going to look for my glory/I’ll be back real soon,” she sings on “Weary,” a song about being weary with the state of the world.

She manages to capture the mood of so many people in the wake of the November elections on “Cranes in the Sky,” about trying to deal with depression and despair:

Musically, “A Seat at the Table” is a mix of downtempo with some 70s and 90s R&B. That’s not surprising given that the executive producer is Raphael Saadiq, who was in 90s R&B group Tony! Toni! Tone!, and has had several acclaimed solo albums that draw on the 70s for inspiration. Compared to her previous work, “A Seat at the Table” is a much quieter, reserved album. There aren’t any bright hooks, pop singles, or dance tracks. This is a grown woman album made by someone fully coming into their own. In that way, it has something in common with “Lemonade,” which also feels like the work of someone not trying to be what other people want her be. That isn’t to say that “A Seat at the Table” doesn’t have its funky moments, but overall it is a muted album.

“Lemonade” is remarkable in how it manages to make so many disparate producers, writers, and singers all feel part of Beyoncé’s singular vision. Solange doesn’t work with as many people, but it is still a fair number and she manages to fully incorporate them into her sound. Even Lil Wayne is in Solange’s world rather than just phoning in some verses. Q-Tip, Kelela, Tweet, The-Dream, BJ The Chicago Kid, and Sampha are also featured, and they all add to the overall project rather than feel tacked on.

More than anything, “A Seat at the Table” is an album about what it means to be a black woman in 2016. In one of the many great spoken interludes, Solange’s mother Tina talks about how upsetting it is for white people to get mad at black people for having Black History Month, and how much beauty there is in being black. Other interludes feature Master P talking about running his own business, and what it means to be a black businessperson. These interludes are powerful and somewhat risky. Here’s an album of beautiful R&B songs, and she’s chosen to intersperse them with messages of black empowerment. Given all the grief Beyoncé has gotten for her “Formation” song and performances, not to mention actual white supremacists being appointed to the White House, it’s no small thing to be proudly black in the U.S. right now. That pride also feels vitally important.