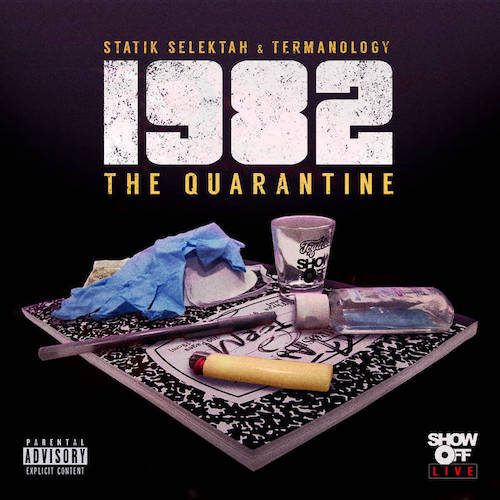 When COVID-19 (aka Novel Coronavirus) evolved from a local Chinese epidemic to a global pandemic, it was as though the widespread disease scenarios presented in films such as “Outbreak” (1995) and “Contagion” (2011) had been brought to life. With the current death toll being over 10,000, it’s understandable that preventative measures have been undertaken to prevent the spread of the disease. In America, five states have gone so far as to enforce a state-wide order requiring residents to remain in their homes while at least partially shutting down non-essential businesses. And with limitations on travel and employment, three new terms have entered the pop culture lexicon: “Social Distancing”, “Self Isolation”, and “Quarantine”. That last one has prompted Massachusetts hip-hop artists Statik Selektah and Termanology (informally known as 1982) to drop a new album: “The Quarantine“.

Inspired by the response to the coronavirus, “The Quarantine” is arguably the first of its kind: The first hip-hop album released during and made necessary by this era of “new normal” which has been encouraged in response to the viral pandemic. Speaking of which, the album opener of the same title has the two standout hallmarks of 1982’s music: Vinyl-sampled boom-bap beats and relentless spitting. On the intro, “Pandemic”, Term spits raps which rail against America’s top richest 1% while comparing the current quarantined times to the “The Truman Show” (1998). With the current restrictions, they instill a desire in people to burst free, to escape, whether it’s from a dead-end job, physical captivity, or an imposing institution. The track “Relatable” conveys this theme: An escape from the current bullshit. Term commands the track over Stat’s piano-driven beat, while Brooklyn rappers C.J. Fly and Kota the Friend provide assists. What’s interesting is that most of the guest stars on this album are from New York, which is one of the five states currently under a shelter-in-place order.

On these next three tracks, more hard hitters from the Big Apple came to lend their voices. Statik laces together a mellow keyboard-driven beat with DJ record scratching on “Another Day”, featuring Manhattan emcees UFO Fev and Marlon Craft (from East Harlem and Hell’s Kitchen, respectively). UFO helmed the first verse and goes on the longest. “Love Don’t Stop”, featuring Coney Island’s Nems, is sort of an “in memoriam” kind of track with a smooth jazz backdrop, but more boom-bap to the drums. “This Too Shall Pass” also has a similar production, but with less boom-bap and more of a 1980s smooth R&B sound, especially with Haile Supreme on the hook. Queens emcee Graph lays down the second verse and stole the show on that track with effortless multis, wordplay, and actual references to the coronavirus:

Termanology remains persistent with his emceeing for the rest of the album. On “All Facts”, he slows down his flow to go with the beat: A looped violin-based sample. On the hook, Term name-checks various hip-hop groups, labels and factions while likening himself to them. Lil’ Fame from Brooklyn’s M.O.P. provides a respective verse and hook on “Morphine” and “Walk With Me”. The former is very reminiscent of the kind of epic orchestral sample you’d hear on an Army of the Pharoahs album, and the sampled choir vocals sound like they were re-purposed from a musical. The latter has Fame’s recognizable voice on the hook along with a verse courtesy of Tek from Smif-N-Wessun. The final two tracks have a buoyancy that’s lacking in the preceding ones. “You Know What Time It Is” stands out because MA-rapper J.F.K. does the outro and sums up why this album is needed in the current times. “Does It Even Matter” is a very upbeat outro and features a verse from Canadian rapper Allan Kingdom.

I think, in part because of the on-the-nose title, that this album will be viewed as a sign of the times when it becomes viewable in hindsight. “The Quarantine” is a solid, if not short, album with few lackluster tracks. Usually, a 1982 album is longer and its most prominent element is the rawness. Though neither artist is a slouch when it comes to being raw, the length of “The Quarantine” leaves just a little more to be desired. Especially from a duo who obviously refused to “shelter-in-place”, but didn’t completely hit listeners with something along the lines of “duck & cover”.