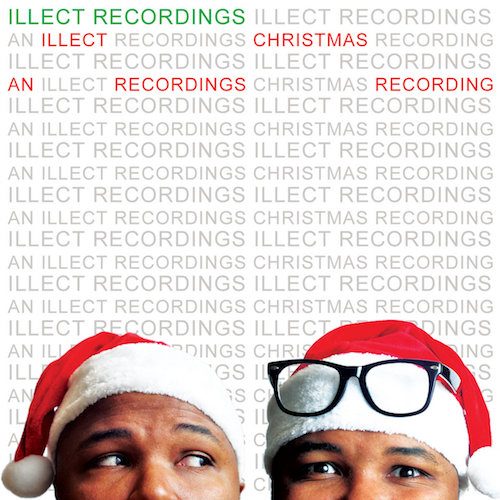 It’s in no way a surprise for Illect Recordings to drop a Christmas album. After all this is a label who are well known for their Christian hip-hop, but it should also be noted that they are well known for dropping spiritually influenced raps that are NOT cornball. I’ve always enjoyed the balance that the label is able to strike between head nodding boom bap hip-hop and their faith, though if you’re the kind to be turned off by even one reference to God or Christ then you’d probably be lost on their output. It’s probably a reflection of my deeper appreciation for different points of view that I no longer take any artist coming out for their religion as having it shoved down my throat. I don’t listen to an Illect album and feel the need to run to church and pray for my sins to be forgiven, and they certainly don’t try to rap chapter and verse from the Psalms as though they are freestyle rap bars.

Now that being said it’s going to be pretty hard to drop a Christmas album as a Christian imprint and not be a little more heavy handed, especially given the natural inclination to counteract how secular the holiday has become and remind people of the religious reasons for the week off work we all get each December. Sometimes but not too often it gets a little pushy on “Christmas Recording,” and that can be blamed largely on the fact it’s a compilation album, because individually the artists would probably try to strike a more balanced and somewhat secular tone on their own albums. Still even when the theme of the season is directly hammered home, the production can make it more than just a Christmas carol with invocations to God. Take “We Three Kings” for example, a song where Page One, Theory Hazit and MG! the Visionary break down the meaning of the gifts that were brought to the baby Christ. Thanks to a funky as hell (SORRY!) bassline and scratching by DJ Because, this is a head nodder you can’t skip over.

The cover of the album pays tribute to Run-D.M.C., who are legendary for many reasons, among them the song I consider the greatest holiday rap track of all time: “Christmas In Hollis.” And if you’re going to do a Christmas album and pay tribute to the Kings from Queens, why not go an extra step further and rock some “Peter Piper” bells on a track? That’s exactly what the Scribbling Idiots do on “Jingle Bell Knock.”

Sometimes though they just can’t help being corny without really intending to be. I dig L.A. Symphony a lot but “It’s Christmas” just tries too hard to meld hip-hop with sleigh bells, and instead of giving you a swinging feeling it ends up creating a holiday hangover. “Christmas Song” fares a little better but for some reason both songs seem obsessed with whistling sweeps of sound on the synthesizer – it’s like somebody keeps blowing in electronic slide whistles. And even though I’m a fan of Sivion in particular, the beat on “Celebrate the Son” is not up to his bars. It’s a muddy mishmash of notes that sounds like it would have been better if it was stripped back to just the drum track.

Conceptually I like the idea of “An Illect Recordings Christmas Recording” because so few labels and even fewer artists really try to tackle Christmas themes for a full album, and often the results are “Christmas Rap” cringeworthy. Thankfully I think that Illect Recordings pulls it off better than that, mostly striking the right notes and only occasionally coming off too preachy or too desperate to make it work.