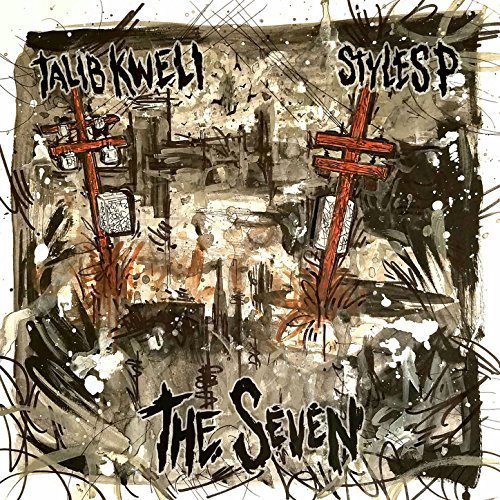 Three may be the magic number but today’s number is seven.

You see, kids, seven years ago, Talib Kweli and Styles P combined on one of 2010’s best singles – the Statik Selektah produced “The Thrill Is Gone”. OK, it was first heard in 2009 but it featured on 2010’s “100 Proof”, so let’s stick with the seven theme. Since then, both Talib and Styles have each had seven projects drop. This is probably coincidental and this EP is called “The Seven” purely because they knocked out seven tracks together, but writing reviews in new, interesting ways is hard work and I’m tired. Deal with it.

“The Thrill Is Gone” was and still is a dope track, utilizing a killer piano loop and some classic Biggie Smalls lines. Even then, Styles was calling for the next generation of Public Enemy to rise up which hasn’t really materialized. Under a Donald Trump administration with racial tension higher than ever, this is a growing concern. Thankfully “The Seven” continues that potent message forward, a decade later with a sound that’s less throwback and more modern NYC. There are plenty of mentions of how hip hop isn’t what it used to be but there’s a nice contrast between the two veterans which gives the rhymes some balance, as demonstrated on “Poets & Gangstas”.

While the former major label emcees are no longer charting with club bangers, it’s nice to hear their message over modern, distinctly New York production. Marco Polo has proven he has chemistry with Talib Kweli in recent collaborations (check the superb Guru tribute they did) and “Nine Point Five” is arguably their best work yet. Styles knows this is the gem of the EP and so enlists Jadakiss and Sheek Louch who deliver strong verses, particularly ‘Kiss, but Kweli delivers potential jabs at KRS-One (depending how much you read in to the line “You follow blind faith it make you seem unclean”):

“We plundered and we wonder why the planet hot
Made in His image, are we worshipping the man or not?
Get an uncomfortable feeling every time I hear “Planet Rock”
Disappointed in the leadership, hand to God
Evidence is more than the images the cameras shot
You follow blind faith it make you seem unclean
But faith in only evidence of things I’ve seen
Cause information make it harder for us to follow discussions
But educated guesses beat wild assumptions
Information lead to knowledge, knowledge lead to wisdom
Wisdom lead to understanding, once you have all that
You start demanding justice
Justice is what love look like in public
I ain’t just writing for it, I’m out here fighting for it”

It’s good to hear Talib mention “the uncomfortable feeling I get every time I hear ‘Planet Rock'” knowing full well Bambaataa is likely guilty of pedophilia despite many in the industry preferring to sidestep the issue. With R. Kelly’s name rearing its urine-stained head once more, the bluntness of many of the rhymes are not only refreshing but a reminder of how passive and protective the music industry can be.

The incredible honesty on display on “Brown Boys” is bottled anger being smashed open. It’s a shame the beat isn’t quite up to the same standard; Kweli tackles the issue of Islamophobia but the Styles P performance is on some vicious Ice Cube steez. It’s the most memorable thing I’ve heard from him since that verse on “Come Thru” back in 2001 and for completely different reasons:

“I am a brown guy
But don’t call me nigger, please
Nigga please, you see that white boy, that’s a nigga b
Nigga ain’t a color, it’s a mindstate, you diggin’ me?
Maybe not, I get it tho
But all them white boys blowin’ weed they some niggas too
The difference is they got white privileges
Cops will kill me but I doubt that they kill ’em too
This ain’t a stab or a jab
But I’m feeling kinda mad they ain’t treated like a villain too
His weed is good as mine, his gun bigger than mine
And he motherfucking chilling too
Now if my color make you hate me then I hope you go blind
And can’t see what your children do
Now that sound kinda harsh
But you would feel like I feel if you had black children too
Racism make you sad and that shit’ll have you mad
Sittin’ there with a sick face
A dickface, you a dickhead
And what you gonna to with all the people from a mixed race
America is a sick place (you know)
But we paint it to be good
This is big city talk that we spreadin’ worldwide
Coming from a humble nigga coming out a poor hood, Ghost”

This is what hip hop needs. Joey Bada$$ toyed with it on “All Amerikkkan Bada$$” but anger and frustration is often best shared in direct, uncensored rhymes. “In the Field” and “Teleprompters” contain topical messages but suffer from weaker instrumentals and thus, the socially aware rhymes can become overbearing. “Let It Burn” though, is my most played song of 2017. It’s filth. THAT BEAT. THAT RAPSODY VERSE. The type of track that has you writing in all caps, thanks to Khrysis’ head slamming kicks and Chris Rivers’ catchy hook.

Ending on a strong note, “Last Ones” reminds us all not to take artists such as Talib and Styles for granted, feeling all the more genuine with the recent death of Prodigy. There are a generation of emcees spitting gems, still putting out good music, but who often go overlooked, yet when they pass away everybody waxes lyrical about them.

“The Seven” may not be either emcee’s best work, it may not quite be magnificent, but it dwarfs many longer projects released this year and deserves your attention. You may just learn something.