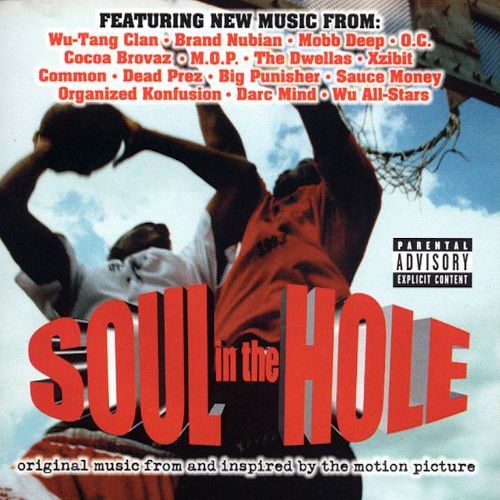 A little over 20 years ago an ambitious documentary called “Soul in the Hole” hit theaters. It didn’t exactly hit HARD though. It was only screened in six locations and netted about $30,000 domestically, which wouldn’t have even covered the production costs. That was hardly the point. Screening any movie in theaters makes it eligible for various awards and ceremonies, and it did actually snag one that I’ve never heard of until now — Independent Spirit’s “Truer Than Fiction” award. It made the rounds of all the big (Cannes) and small film festivals, being screened and seen by as many people as possible, and once it accrued enough acclaim international screening and television deals were secured, which may have finally enabled the filmmakers to break even on the project.

What even is “Soul in the Hole” though and why am I bringing it up in the first place? The reason is I stumbled into the film backwards. Soundtracks usually follow movies but in this case I picked up “Soul in the Hole” in July 1997 without any chance then or any time soon to see the film, and little concern about whether or not I even would. It’s not that the subject of the film didn’t intrigue me – basketball dreams on the mean streets of Brooklyn – but I knew that my slice of the Midwest wasn’t going to be one of those six theaters the film was shown in. This soundtrack didn’t need me to see the movie first to be hyped for it though. The list of artists was like hip-hop’s version of the NBA All Star game – M.O.P., Organized Konfusion, Big Pun, Wu-Tang Clan, Cocoa Brovaz and Common just to name a few. While some movie soundtracks make a token effort to include rap songs to appeal to a broader audience, this one matched its Brooklyn b-ball theme by keeping it hip-hop from beginning to end.

The fact that the soundtrack came out through Loud Records via Relativity no doubt helped push things along, as Loud’s bonafide hip-hop credentials in the 1990’s dated all the way back to Wu-Tang Clan’s debut album. In fact this album helped push along more Loud artists that were blowing up. Xzibit had made a splash with Tha Alkaholiks and King Tee before his 1996 debut “At the Speed of Life,” but the Mel-Man produced “Los Angeles Times” was a firm reminder that he wasn’t going anywhere. In fact the song was so hot it found second life as the second single off his sophomore LP.

“MC’s get f—-d up, chopped like Braveheart
Don’t start what you can’t finish, serious bidness
Down La Seneca to bust a left on Venice
where you can find me and mines — Los Angeles Times
Where every other day I’m taking the hat off my head
Givin respect to the dead, and avoid havin the same thing
said about me, Xzibit stand underground
like the roots of a tree, watered three times a day
Forty ounce Olde E, like a magnifying glass
making it easier to see, the Mister X to the Z”

It took a little longer for the No I.D. laced “High Expectations” to get additional exposure, but Common’s track did eventually wind up on his compilation album “Thisisme Then: The Best of Common.” That title was apt. This is definitely the best of Lonnie Rashid Lynn at his lyrical peak.

The soundtrack just barely predates Big Pun’s first commercial single – in fact there’s only a one week difference – but it’s still technically the first time Pun was presented by Loud as a solo artist to the world. While “I’m Not a Player” and the remix featuring Joe were the songs that put Pun on the map globally, “You Ain’t a Killer” was more emblematic of the hardcore hip-hop that would later be found on “Capital Punishment.”

In many ways you could look at “Soul in the Hole” as more compilation than soundtrack, as other than the title track and perhaps Dead Prez’ “The Game of Life (Score)” the basketball theme of the documentary is not overtly evident in the musical selection. You might even ask what Los Angeles has to do with Brooklyn per Xzibit’s inclusion and fair enough if you did. So if we look at it on the basis of being a compilation instead of a soundtrack, it’s still a damn good compilation, and a chance to hear “rare” songs like Mobb Deep’s “Rare Species” you won’t find anywhere else.

To be fair though not every song on here is a gem. In fact at the time I remember being sorely disappointed by Wu-Tang Clan’s “Diesel,” despite a typically insane rap/rant from Ol’ Dirty Bastard about the government being out to kill him and his baby momma trying to use him like a pawn in a chess game. It’s classic but the production certainly isn’t. RZA allegedly produced it but I prefer to think he shopped it out and slapped his name on it.

Still if you can get through the few disappointments there’s a lot to like on “Soul in the Hole” including obscure hip-hop acts like Darc Mind (“Visions of Blur”) who do just as well as their more well known counterparts like O.C. (“Your Life”). On a list of must own albums this one wouldn’t make the cut, but if you narrowed the list to must own rap soundtracks, it would easily be in the top 10.