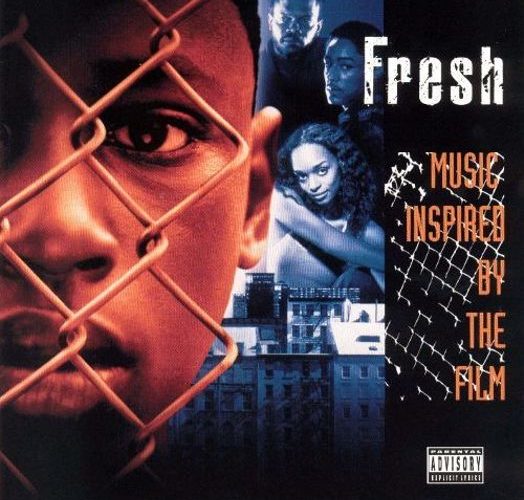 The film “Fresh” much like the “Music Inspired By the Film” accompanying soundtrack are both largely forgotten over two decades after they were released. They’re each worth discovering though. The movie is an underrated coming of age tale featuring the titular character Fresh (portrayed by Sean Nelson) trying to escape from a life of poverty, violence and drug running using both street smarts and the chess moves he learned from his alcoholic dad (portrayed by Samuel L. Jackson). These aren’t the only actors you’ll recognize in the film – N’Bushe Wright plays Fresh’s sister Nichole, Giancarlo Esposito (yep that’s Gus Fring from “Breaking Bad”) plays drug dealer Esteban, and so on and so on. I’m not saying your life will be ruined if you never watch this movie, but you certainly won’t consider it two hours of your life wasted if you do.

Now let’s clarify the word “soundtrack” here because it both is and isn’t any such thing. “Music Inspired By the Film” is both more accurate and a less satisfying way to describe this album. I’m honestly going to have to rewatch the film myself to even recall if any of these songs were used in it, though I strongly suspect that they were at least background music in many scenes, particularly the selection of old school hip-hop tracks. These days most heads would consider this entire album “old school” but when it came out in 1994 there was a very clear delineation between the three new Wu-Tang Clan related songs and the nine OLD “old school” songs that dated from the early 1980’s. I had a pen pal friend back in the day who was a New York deejay named Bubs and when he sent me “old school” mixtapes the selection was uncannily similar – everything from Spoonie Gee to Cold Crush Brothers to Whodini. Odds are you know the latter’s “Freaks Come Out at Night” if you know any of the classic tracks here.

This “soundtrack” would be worth buying just for these nine songs, many of which were hard to impossible to find in a crisp clear digital compact disc format at the time, and ironically might be even harder to find now given a consumer movement away from physical items like CDs (although ironically more “retro” formats like cassette tapes have enjoyed a resurgence). I’m pretty sure I’ve never seen Fresh 3 MC’s “Fresh” or T-Ski Valley’s “Catch the Beat” anywhere else. The three Wu-Tang Clan songs though are ALSO quite good and in fairness probably the reason anybody bought the “Music Inspired By” at the time. The Clan’s ascent in hip-hop stardom had not slowed down one bit in 1994 as many members had yet to drop their own solo works and their sophomore album “Wu-Tang Forever” wouldn’t even come out until three years later. All three inclusions are produced by RZA and bare his signature dirty Wu sound, starting with GZA’s solo effort “I Gotcha’ Back.”

This song would reappear a year later on his first solo album “Liquid Swords” but until such time it was an excellent teaser of what was to come from GZA as a soloist (at least for those who hadn’t heard his lesser known “Words From the Genius” debut in 1991). His was not the only song to be recycled though as Raekwon’s somber and powerful “Heaven & Hell” came back for a second run on his seminal “Only Built 4 Cuban Linx…” album along with the “Can It All Be So Simple (Remix)” of the original from “Enter the Wu-Tang.” Sadly this means the only tracks you might not already own if you’re a dyed in the wool true Wu head are the old school classics that pre-date the Wu, and frankly it’s still weird to me when I hear kids today call Wu-Tang “old school” but that’s before the gray hairs on my head and chin remind me just how old I really am. Can I call this a “must own” album? If you’re into both old Wu and even older classic hip-hop it’s definitely a pick-up if you find it at a reasonable price. You could rebrand it as a “Best of 1980’s Hip-Hop” compilation and be 75% accurate, and probably sell a lot more copies than it did the first time around. Maybe somebody at Sony Music (which now owns the RCA Records imprint) should.