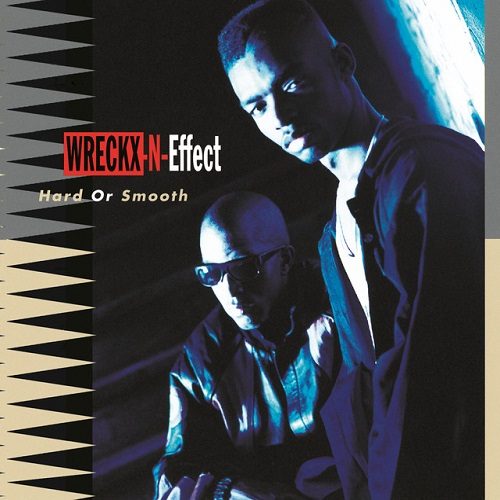 Wrecks-N-Effect was a modest success in 1989 with their self-titled debut LP. The group had an “in” most of their competitors did not thanks to group member Markell Riley being the brother of chart topping super producer Teddy Riley, and it should come as no surprise he appeared on the album’s most successful single (appropriately named after the genre Riley is often credited for) “New Jack Swing.” The album topped out at No. 16 on the Billboard R&B charts, but sadly founding group member Brandon Mitchell was shot and killed in 1990 just as the group was enjoying the fruits of their hard work from the late 80’s.

Three years later the reformed group changed their name to Wreckx-N-Effect, stating that the name change was a deliberate reflection of Mitchell being absent after his passing, which is both a heartwarming gesture and a little bit odd upon reflection. It’s definitely appropriate to change a group’s name when a founding member is tragically killed, but did changing an “S” to an “X” really change anything that much? Nevertheless the ’92 line-up was now a duo instead of a trio and featured remaining rappers Aqil “A-Plus” Davidson (not to be confused with this A+) and the aforementioned Riley. This time around Teddy Riley took more of a direct hand in the group, going from making a cameo and being the executive producer to getting a production credit for every song (11) on this 46 minute CD. In addition Teddy made ANOTHER cameo rap appearance on the smash hit “Rump Shaker,” a song which proved to be bigger than anything from their debut LP, rising all the way to No. 2 on the Billboard Hot 100 and the Hot R&B/Hip-Hop Singles charts.

The first time I heard the song I was a little bit confused, because I already associated the horny horn sample of The Lafayette Afro Rock Band’s “Darkest Light” with a Bomb Squad produced P.E. sample heavy interlude called “Show ‘Em Whatcha Got” from 1988. I’m clearly not the only one who thought of it as a P.E. track. When Just Blaze and Jay-Z dropped the single “Show Me What You Got” off of “Kingdom Come” the song’s name AND sample both referenced Public Enemy. To be honest it took me a while to get over this perception, but the song became so ubiquitous and infectious nobody wanted to hear a smart alec kid say “Bomb Squad did it first” and eventually I stopped caring too. I even bought a ticket to see Wreckx-N-Effect in concert from the local hip-hop record shop guru Dean, but sadly they cancelled that date and never came to Iowa (which left me muttering, “Should have known they wouldn’t come to the cornfields”). I honestly can’t remember if I ever got a refund — if not I was out $25.

The good news is that over a quarter century later I was able to find an unblemished copy of their sophomore album in a bargain bin for $2. That doesn’t entirely make up for the concert I never got to see at the peak of their popularity, but it’s easily one of the smaller investments I’ve ever made in a nostalgic slice of my childhood. I was a little hesitant as I popped this CD in for review though knowing that “Rump Shaker” was the only song I knew from the entire album. Obviously having Teddy Riley behind the boards for your project can make anybody sound good, but would “Hard or Smooth” hold up to the standard set by its lead single?

Things get off to a good start thanks to yet another familiar sample on the second track (immediately after “Rump Shaker”) titled “New Jack Swing II (Hard Version).” What makes it hard? A piano loop from Joe Cocker’s “Woman to Woman.” Most of you will know it as part of the backdrop to the Dr. Dre produced 2Pac hit “California Love,” though once again I knew it first before either of these appearances – the Ultramagnetic M.C.’s used it on “Funky.” What can I say though? You could probably record Scott Pruitt’s ass farting into a trumpet and put it over this loop. The trumpet (much like the man) would be sh–ty but it would still wind up sounding good.

Now it seems we have a pattern emerging of songs which take familiar breaks and loops but get “the Teddy touch” plus raps by his brother and A-Plus. “My Cutie” gets several of them starting with “Fly Like an Eagle” by Steve Miller Band, Doug E. Fresh & MC Ricky D (Slick Rick) with “La-Di-Da-Di,” and most obviously one of the most sampled drum breaks outside of James Brown in “Hihache” by that same Lafayette Afro Rock Band — clearly a favorite in the crates of Mr. Riley.

Curiously “My Cutie” is marked with an * on the cover that says “only available on the cassette or CD version.” Well those are the only two versions a young Flash would have bought in ’92 so I can’t imagine I ever would have missed this song. Other songs not to miss include “Hard” (think Marley Marl’s “The Symphony”), “Wreckx Shop” (everything from Billy Squier to Audio Two) and “Knock-N-Boots” (Lyn Collins and Funkadelic among many others). Basically if you like the sound of late 1980’s and early 1990’s hip-hop then one way or another Teddy’s got you covered from start to finish on this album.

Unforunately you won’t find much in the way of lyrical depth to go along with the music and the beats. Nothing from Markell or “Miggidy Mark” as he often calls himself is offensively bad, but he’s the weak link compared even to the cameo raps by his brother (who bizarrely enough was being ghostwritten by a very young Pharrell Williams) or his tag team partner A-Plus. Let’s rewind and take a look at that “Hard Version” of “New Jack Swing” and see what Markell has to say.

“It’s the miggidy-miggidy-Markster, and I’m back, to put you on track
cause if it ain’t ‘New Jack’ this is ‘New Jack’ cat
Everybody bumpin they gums about the ‘Swing’
Frontin on my brother like you didn’t believe a thing
But hold up, stop, wait a minute, pause
I giggidy-go for mines if you giggidy-go for yours”

Honestly the only people who should be rocking that style are Krazy Drayz and Skoob (“the Books in reverse”) and even their use of it eventually got tiggidy tiresome. There isn’t a single profound statement in any of these songs, which admittedly was not the point, because the entire reason this group existed was to make party rocking anthems. In fact the comparison to LMFAO is apt because both groups used a hint of nepotism and family connections to get ahead, and you can hate on it if you want to but they still had to make songs people wanted to dance to. Wreckx-N-Effect also got by the parental wall of discretion because neither Mark nor A-Plus curse in their songs, and the closest they get to explicit is lines in “Rump Shaker” like “Since you got the body of the year, come get the award/here’s a hint – it’s like a long sharp sword.” Radio friendly and given a “swing” by Teddy, Wreckx-N-Effect will go down as a historical footnote in hip-hop history, but it’s one that’s at least fun to revisit.