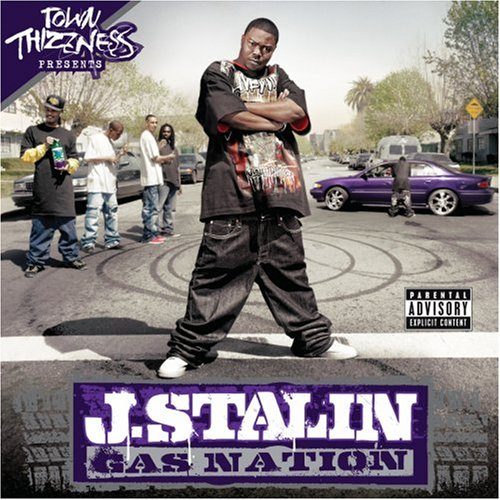 J. Stalin’s hometown of Oakland is so crime-ridden that the Economist wrote about it’s high homicide rates. You know your town has issues when an international paper focused on economics is writing about it. The title of his album, “Gas Nation,” refers to West Oakland’s nickname (“gas” is slang for guns). In an interview in Murder Dog, Stalin explained “West Oakland is Iraq right now. It’s hella wild…It’s a war zone because there’s nowhere to hide…That’s why we call West Oakland ‘Baby Baghdad'” The Economist article suggest that the high homicide rates, almost always black-on-black, are primarily caused by crack babies killing for respect. Crack is definitely to blame, as are California’s harsh drug laws and broken penal system. Stalin is certainly a product of crack epidemic. “I emerged from the crack smoke/Momma was a fiend/Taught a nigga how to whip the coke,” he raps on “Self Destruction.” His mother was an addict, and he started selling crack at 13, after realizing that it was much more lucrative than selling candy. After getting sent to jail at 17 on drug charges, he realized that rapping about his background was a better life choice than staying in the game. A prodigy of Bay rapper Richie Rich, he released his first album in 2006, before following up last fall with “Gas Nation.”

As a rapper, J. Stalin hits all of the street rap cliches. He has a songs about his shoes, songs about dealing, songs about how much money he has, and multiple tracks about getting fucked up. He’s more conservative when it comes to his money, staying away from bling and instead investing in real estate, rapping “I’ll take a nice house/but I don’t need an iced wrist.” Women are bitches and hoes, and if they’re lucky he’ll get them drunk and feel their kitty when he’s driving. That’s standard Street Rap 101 stuff, and has been done a million times over a million synth beats by a million young rappers trying to make a name for themselves. What makes J. Stalin special is that the dude can rap, and he’s a lot more insightful than your average thug-turnt-rapper. Part of this has to do with the fact that he comes from West Oakland. By 13, he probably saw more heavy, horrible shit than your average suburban kid sees in their entire life. He came of age in a city where everyone was either an addict, a dealer, dead, or in prison. That’s a horrible way to grow up, and the pain of his situation shows in his lyrics. On “Self Destruction” he raps about his life as a dealer with a mixture of defiance and sadness:

On “Can’t Judge Me,” J. Stalin raps over a soulful beat while declaring:

Regardless of where he was brought up, Stalin is also a skilled lyricist and rapper. He has a rapid, melodic flow, and unlike a lot of rappers, can actually hold a tune. He doesn’t sing so much as he raps in melody, and he makes it work. Like a lot of Bay Area rappers, he fills his rhymes with obscure slang and references to Bay Area culture. A lot of this might be lost from people who reside outside of the 510 area code, but even if you don’t understand everything he’s saying, you can appreciate his delivery. Like UGK, he manages to be both street and smart, which gives his gritty rhymes even more power.

“Gas Nation” is a quickie album, released in a hurry to build on the success of his 2007 single “Banga Dance.” He’s also putting out a mixtape a month now, and preparing another proper album. This quick and dirty approach affects the quality of the album. Stalin is a great lyricist, but he’s not always throwing darts here, falling back on rhymes that probably wouldn’t have made the final cut if he had had more time to edit. The beats also sound rushed at times, with obvious toss-offs mixed in with the good stuff. “Cocaine Cowboys” has some nice 80s synths, but then ruins the song by interspersing badly-recorded excerpts from the documentary of the same name. 80s is the name of the game here, with a lot of the beats sounding like straight 80s R&B (Mekanix handled a lot of the production, with Trackademicks doing a few tracks; the digital copy I legally downloaded didn’t list any production credits). There are also a few tracks that sound more hyphy, or at least more 2000 than 1985. “Ridin’ Ridin’,””I’m Back” and “My Niggaz” have the crisp funk sound of Dre beats, and “You Heard What I Said” references the Triggerman beat. “Thunder Dome…Philthy Rich” has shimmering rave synths, while J. Stalin spits “The judge said four/My lawyer got me one/A year in the county/So nigga I won/And I ain’t a snitch/So nigga I ain’t telling/You won’t catch me in my hood talking ’bout I made bail.”

J. Stalin’s combination of gritty but insightful raps, melodic flow, and heavy slang reminds me of a Bay Area version of T.I. Like T.I., J. Stalin is a hustler who has the brains and talent to be doing better things, and things that hopefully won’t land him back in prison. “Gas Nation” is good album by a rapper who has the potential to be great. Keep your eye on this West Oakland native.