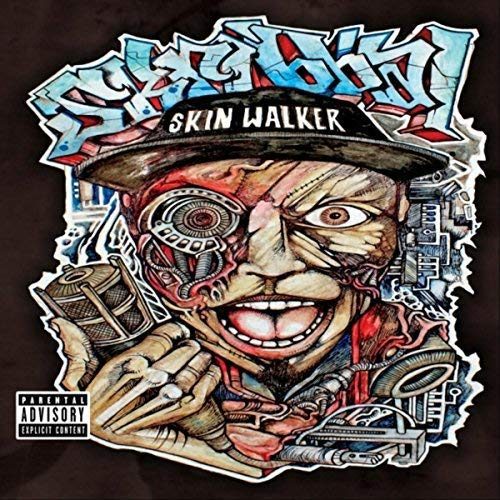 You’re probably as new to Skribbal as I am, so I think it’s only fair to introduce you to him from the details I learned doing research for this review, with a shoutout to FaygoLuvers for their extraordinarily helpful interview. Skribbal is an Oregon born rapper who wound up living with his grandparents in California after a stint in foster care. He describes himself as “rapping almost the moment I got to (Cali)” and seemingly has an incredible musical network from with which to build up that career, including an uncle named Katfish who is a drum tech for Korn. Putting all of these elements together results in his professional debut “Skinwalker,” produced by James Broadway (King T, Tha Alkaholiks, et cetera) and Apakalips (Nipsey Hussle), distributed by Force 5 Records. There are apparently some independent underground records he did before “Skinwalker” but I don’t have access to those and they’re not the focus of this review anyway — it’s just so you know this isn’t the first s–t he’s ever put down musically before now.

You may have already surmised from the reference to FaygoLuvers that there’s at least a slight connection to ICP, and he does indeed shout out juggalos for showing him love in the interview above. On the album the connection is slightly more tenuous. Saint Dog appears on “Hang ‘Em High,” he’s a former member of the Kottonmouth Kings, and the Kings have done tours and songs with ICP over the years (“Think 4 Yourself” from the album “Cloud Nine” being one such example). To bridge those ties you’re essentially playing “six degrees of separation” without Kevin Bacon. In the same way you could link Skribbal to ICP through Chucky Chuck of DGAF on “Knock Ya Teeth In” or Jaysin the Sin God on “Glock Talk Back.” None of these people would be out of place performing at a Gathering of the Juggalos and Skribbal definitely falls into that category too. In fact if he had been signed to Suburban Noize or Psychopathic Records I wouldn’t have been surprised.

Much like many albums released these days “Skinwalker” is a little bit on the short side, clocking in at only 35 minutes long, though from the album’s title and content it seems appropriate for October as Halloween draws in. For those who don’t know the lingo a “skin-walker” is a witch who can pass itself off in disguise as an animal to infiltrate human settlements and are considered a bad omen and/or capable of causing direct harm. A more in-depth explanation is sadly not possible because I’m (1.) Not an expert in Navajo lore and (2.) Even those who are may not fully understand it because Navajo people are reluctant to discuss the ramifications of the lore with outsiders. Nevertheless pop culture has spread the idea of skinwalkers through horror and science-fiction, and the name itself has a fearsome ominous tone even without the cultural understanding of its origin. It probably won’t surprise you then that there’s a song called “Bruce Campbell” (featuring Mars) on the album, as he’s the actor who portrayed Ash in the “Evil Dead” trilogy.

If I were to categorize this album, I’d personally associate it less with ICP and more with the horrorcore genre. Skribbal himself is our protagonist, haunted by his demons and knowledge of the fragility of human life, fighting “a life that’s hell in my own head” on songs like “In the Dark.” Given he spent a couple of years in foster care before he was even a teenager, I don’t have any trouble understanding where he’s coming from rapping lines like “I just want you to feel the love that I never did/smother you with kisses and hugs cause you was heavensent” to his own child. Skribbal undoubtedly hopes that he won’t pass down whatever trauma disrupted his own youth to the next generation in his family line.

Even when he tries to find the light in his own darkness, horror movie samples, thunderstorms and horrified screams permeate bass heavy songs like “All Hail” and “Don’t Doubt Me.” The latter is one of my favorite vibes on Skribbal’s entire CD as it sounds interchangeable for a Madchild rap song, right down to Skribbal’s vocal tone and delivery. It’s not a coincidence that Madchild has himself battled some pretty serious demons, so I wouldn’t be surprised if Skribbal said he found him an artistic inspiration. The content of “Skinwalker” is dark and often borders on macabre, but if you like horrorcore rap and/or enjoy a good scare even if it’s not the Halloween season, this one’s for you.