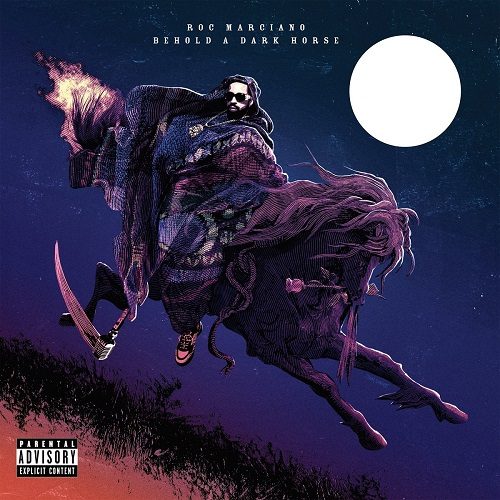 There are many cliches for underground emcees with a lot of swagger and they all existed long before albums were reviewed on the internet. You probably know them all. “Your favorite rapper’s favorite rapper.” “Major without a major label.” “Ghetto platinum.” They are all ways of saying you think so-and-so is a nice emcee who doesn’t move as many units as Shawn Carter or Sean Combs. All of these platitudes are routinely applied to Roc Marciano a/k/a Roc Marci, a Long Island rapper who is a self-declared “Floyd Mayweather with the cheddar” on the album “Behold a Dark Horse.” The track he busts this declaration on is interesting for two reasons — first because he shares billing on the song with Black Thought from the legendary Roots crew, and secondly because “Diamond Cutters” is a title that can be taken two ways. You could assume he’s talking about how lyrically sharp the two of them are but if you’re a pro wrestling fan you could just as easily assume it’s about how devastating their raps are competitors, because DDP always ended his matches with a BANG!

Oddly enough the track would not nearly be a standout were it not for the tag team on the beat. Roc Marci’s self-production on the song is serviceable but not stellar – it’s just a placeholder for two well regarded rappers to show off. The song’s end meanders on like a sample that nobody knew how to cut off, leaving you impatiently waiting for the more interesting Animoss produced “Amethyst.” Let me be clear though that this is not a certified head banger either — it’s just an excuse for the laconic lyricist to make laid back quips like “I’m a threat out here, you better not let the cat out for air.”

“Behold a Dark Horse” does not lack in potential or star power. Q-Tip from A Tribe Called Quest laces up mellow smooth instruments “Consigliere”, things get dank and heavy when The Alchemist drops in to blow ears on “Fabio,” and Roc does his best production work for a Flipmode Squad reunion with Busta Rhymes on “Trojan Horse.” While Black Thought’s cameo could be seen as like minded emcees with devoted admirers, Busta Rhymes is often disregarded as “a rapper’s rapper” because of the belief he went platinum off sheer charisma. In truth both Thought and Rhymes are equally commercial in terms of the units they’ve moved over the years, although neither song’s content could be aimed at pop radio.

Therein lies the conundrum of Roc Marci’s career, one which now stretches back over 20 years and finds the “ghetto platinum” emcee hitting his 40’s. Marci’s peak as both a lyricist and a producer seems to have come eight years ago on “Marcberg” yet he rolls on dropping one release after another to modest acclaim and success. It’s a living… but at times Marci seems bored with the life. It can be hard to tell given he’s a modern day “Mr. Slow Flow” that could rival Parrish Smith’s heyday. There are songs like “Secrets” though that suggest such promise for a motivated Marci and fail to deliver. The irony is that Roc Marci achieves what Busta Rhymes is notorious for on the song. The entire presentation rides solely on the charisma of Marci’s vocal tone and flow even though there’s no flair to simplistic verses that sound like throwaway AZ bars.

“Like my Cuban ho, she from L.A, came in as a runaway
Now it’s Hummers and bubb-a-lay
Fendi runners, different color wigs
Vera Wang bikinis, pretty summer days
Telling brothers you was engaged (lyin)
Ain’t that a motherfuckin shame? You said you was with Lorraine
You was clubbing with Puff and gang (ha)
Puffin haze, sniffing grade-A yay out in the open like it’s ’88
Lady, you claim to change your shady ways
But it’s safe to say that you ain’t shaded, baby wait”

The problem with being a “major without a major label” emcee is that you need to deliver major flavor to keep that rep up and please your devoted 50-100K who cop every release. “Behold a Dark Horse” won’t disappoint long time Roc Marci fans, nor will it offer them anything new that they’ve never heard from Marci before. I hate saying it’s a “paint by the numbers” album but I’ve got to call it like I see it. If you can’t tell the difference between whether an artist is purposefully being low key or if he’s just plain bored telling the same crime tales he’s told before, that’s not a good thing.